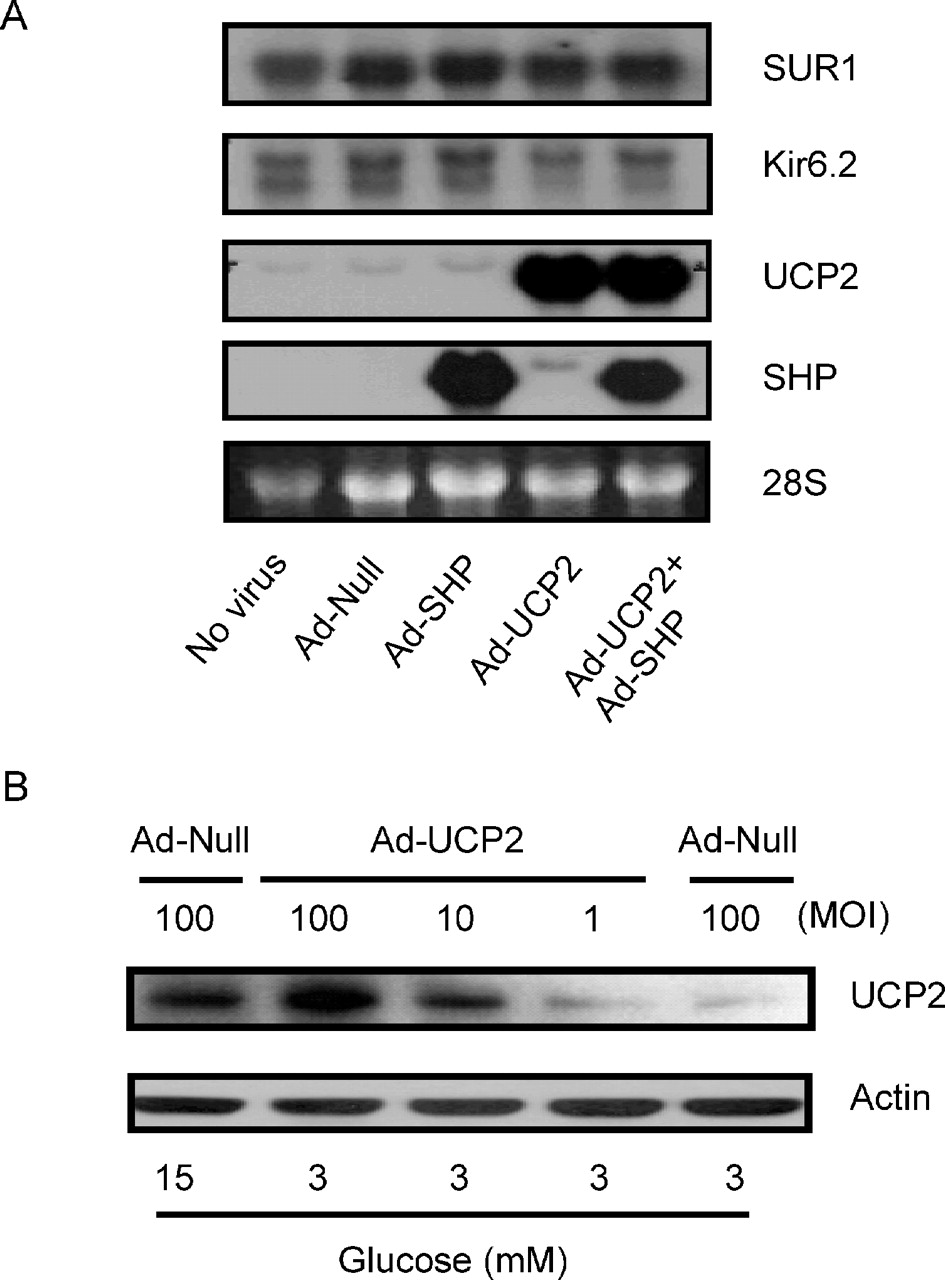 Overexpression of UCP2 and/or SHP in INS-1 β-cells. (A) INS-1 β-cells were infected with either Ad-Null, Ad-SHP, Ad-UCP2 or Ad-UCP2+Ad-SHP. The cells were cultured in the presence of 3 mM glucose and harvested 48 h after infection, and total RNA was isolated. Total RNA (20 μg) was separated, transferred to a nylon membrane and probed with the respective radiolabeled cDNA. Equivalent loading of RNA was confirmed by 28S rRNA. (B) Quantitative comparison of UCP2 protein expression induced by high glucose or different MOIs of Ad-UCP2 in INS-1 β-cells. INS-1 β-cells were infected with Ad-UCP2 (1, 10 or 100 MOI) or Ad-Null (100 MOI only) in the presence of low glucose (3 mM). At 24 h after infection, a group of Ad-Null-infected cells were further exposed to high glucose (15 mM) for 48 h. Total cell lysates were prepared and analyzed for UCP2 or actin Western blot. 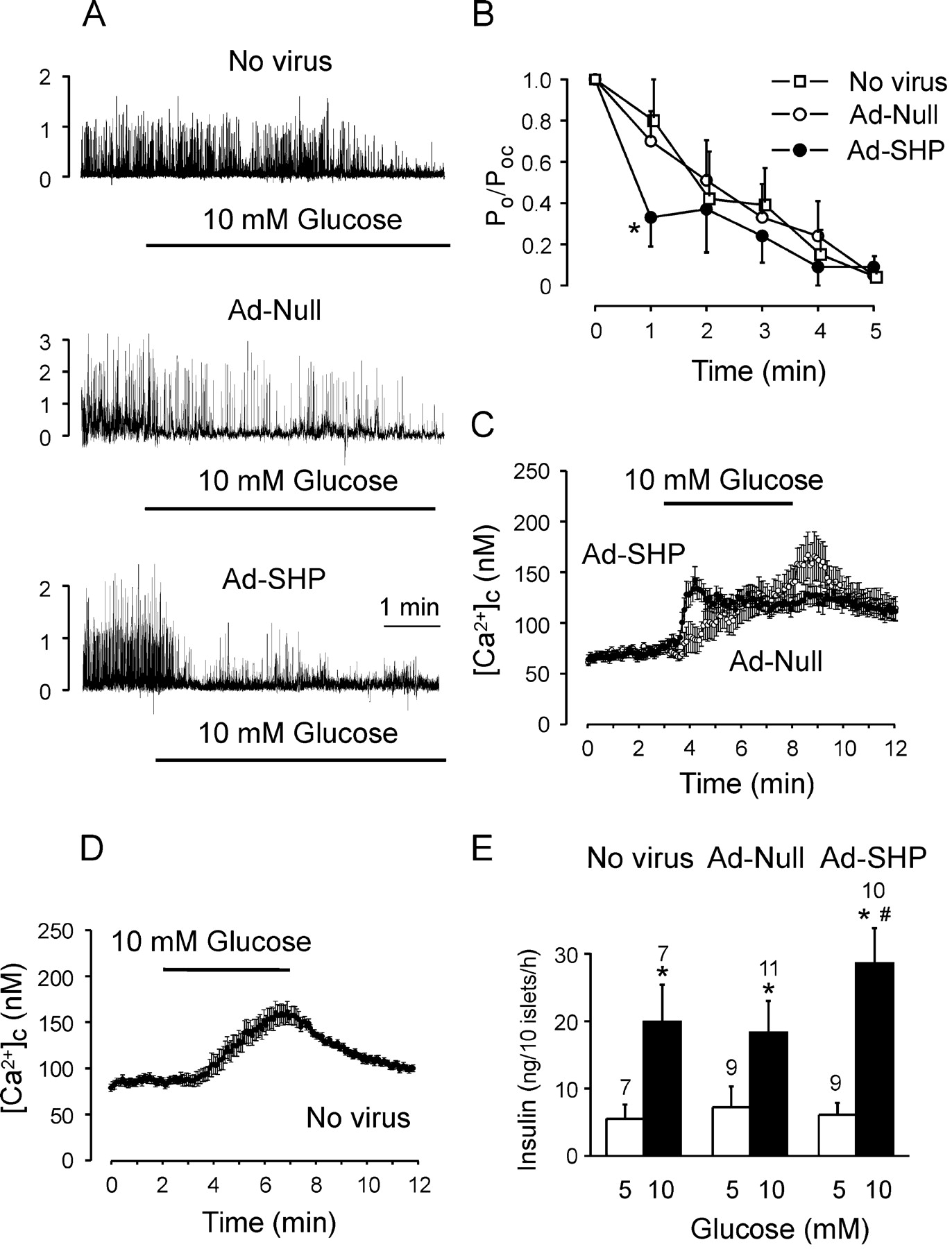 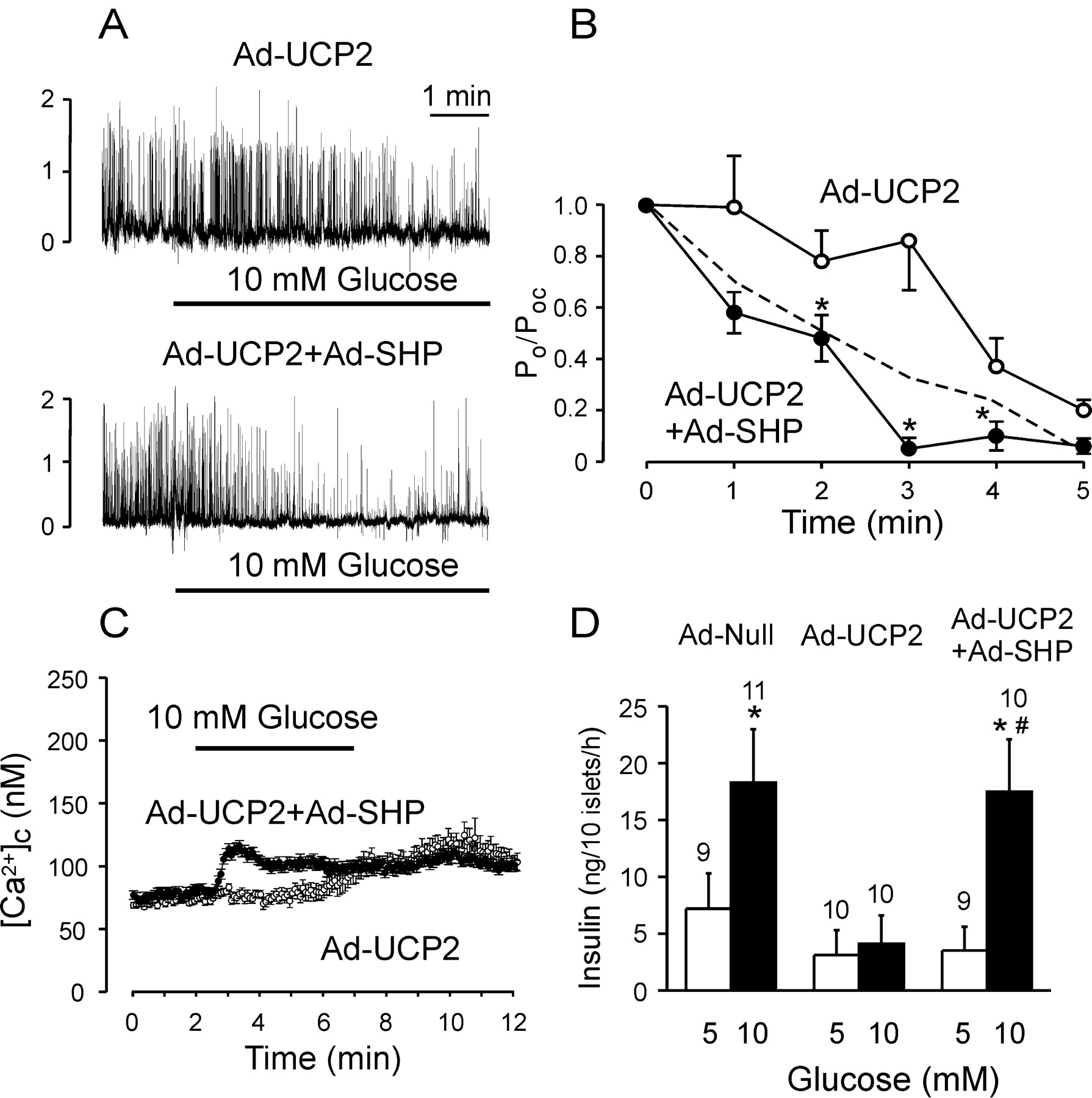 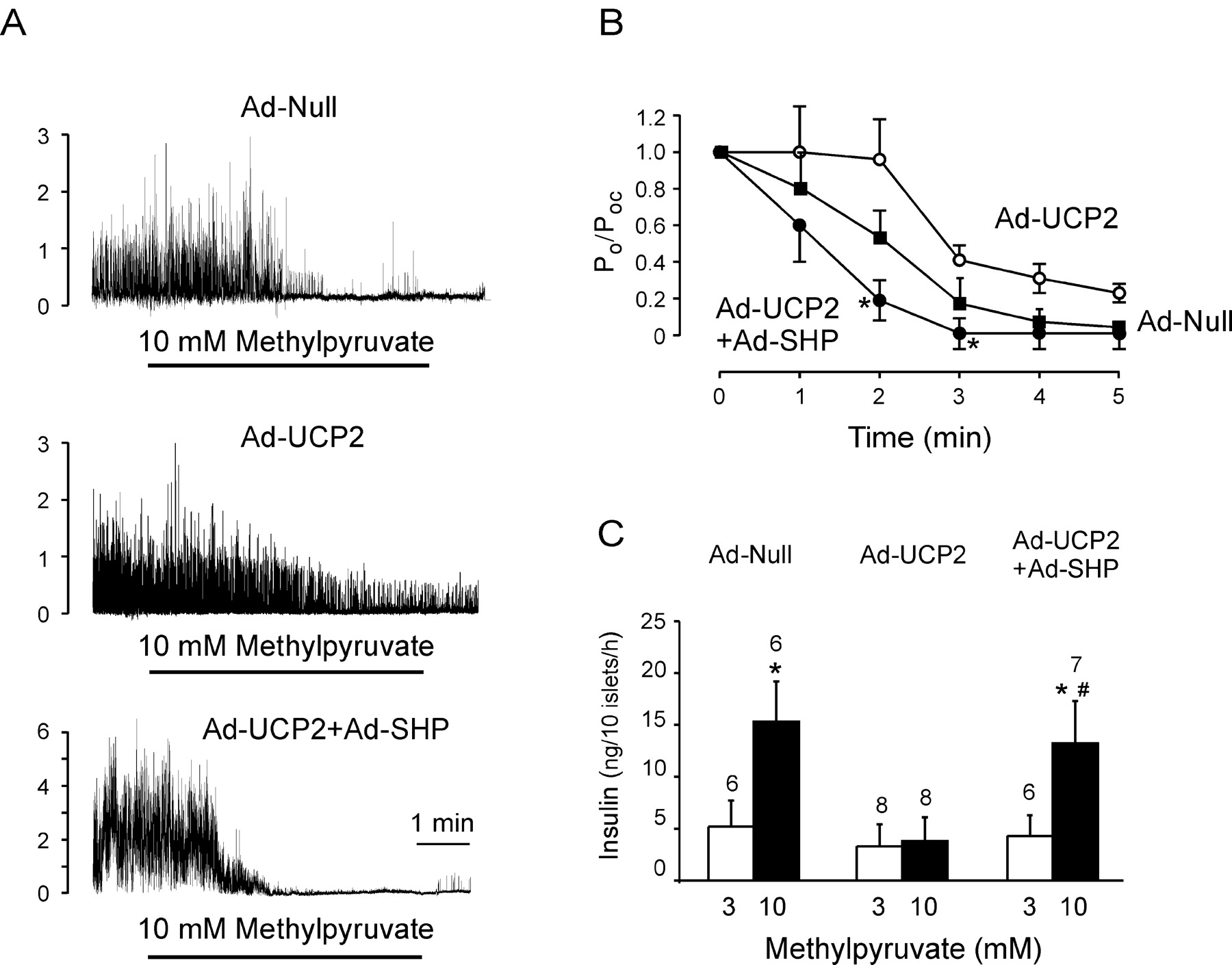 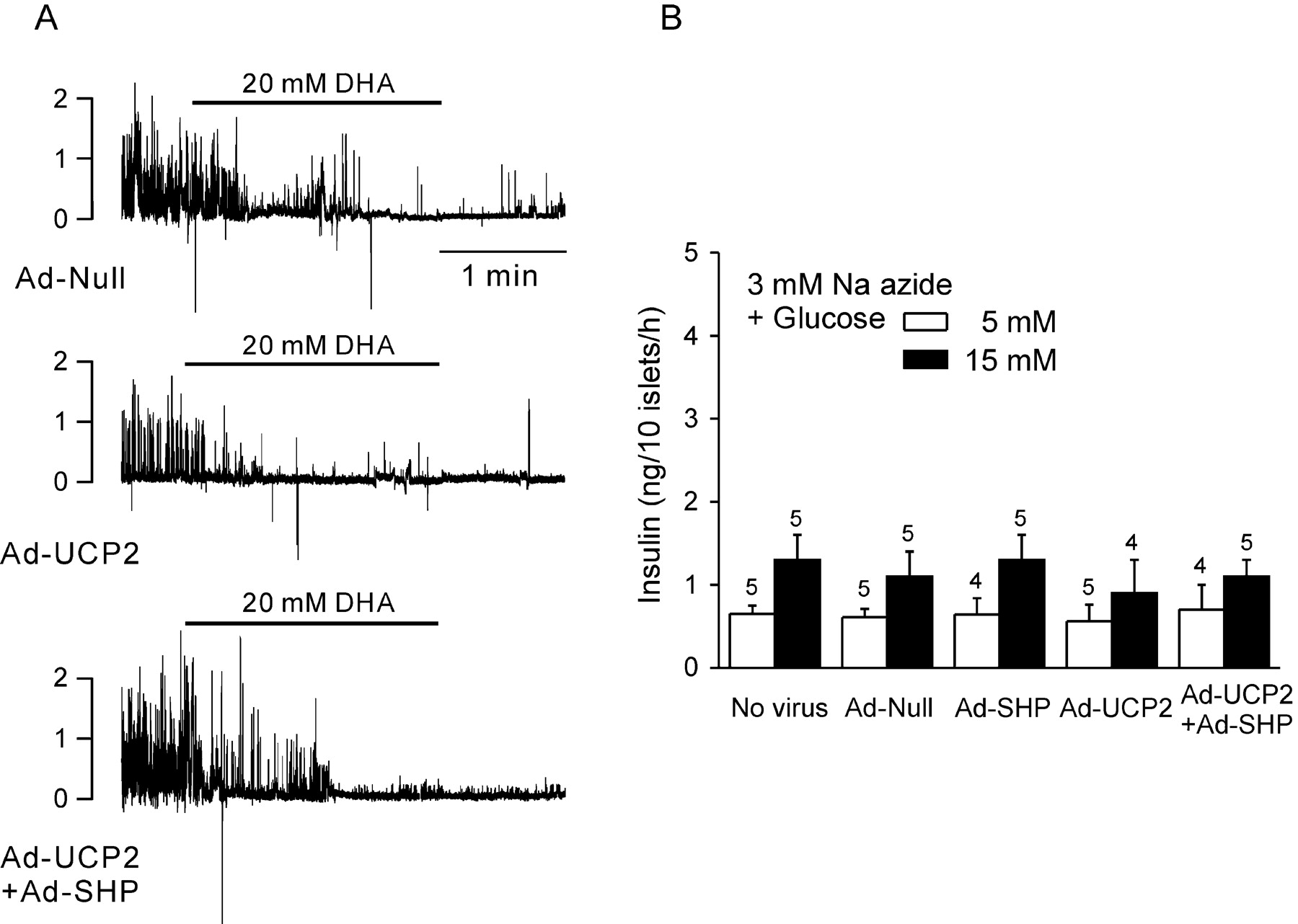 Dihydroxyacetone (DHA)-stimulated KATP channel inhibition in Ad-Null-, Ad-UCP2- or Ad-UCP2+Ad-SHP-infected β-cells. (A) Cell-attached mode at a membrane potential of 0 mV. DHA (20 mM) was applied to the bath solution as indicated by the bars. The vertical scales indicate the number of channels. The downward spikes representing cellular depolarization are also shown. (B) Effects of pretreatment with a mitochondrial metabolic inhibitor sodium azide (3 mM) on insulin secretion in response to glucose in no-virus-infected, Ad-Null, Ad-SHP, Ad-UCP2 or Ad-UCP2+Ad-SHP group. The number of data points (n) given above each bar was obtained from at least three separate experiments. The symbols represent means ± s.e.m. 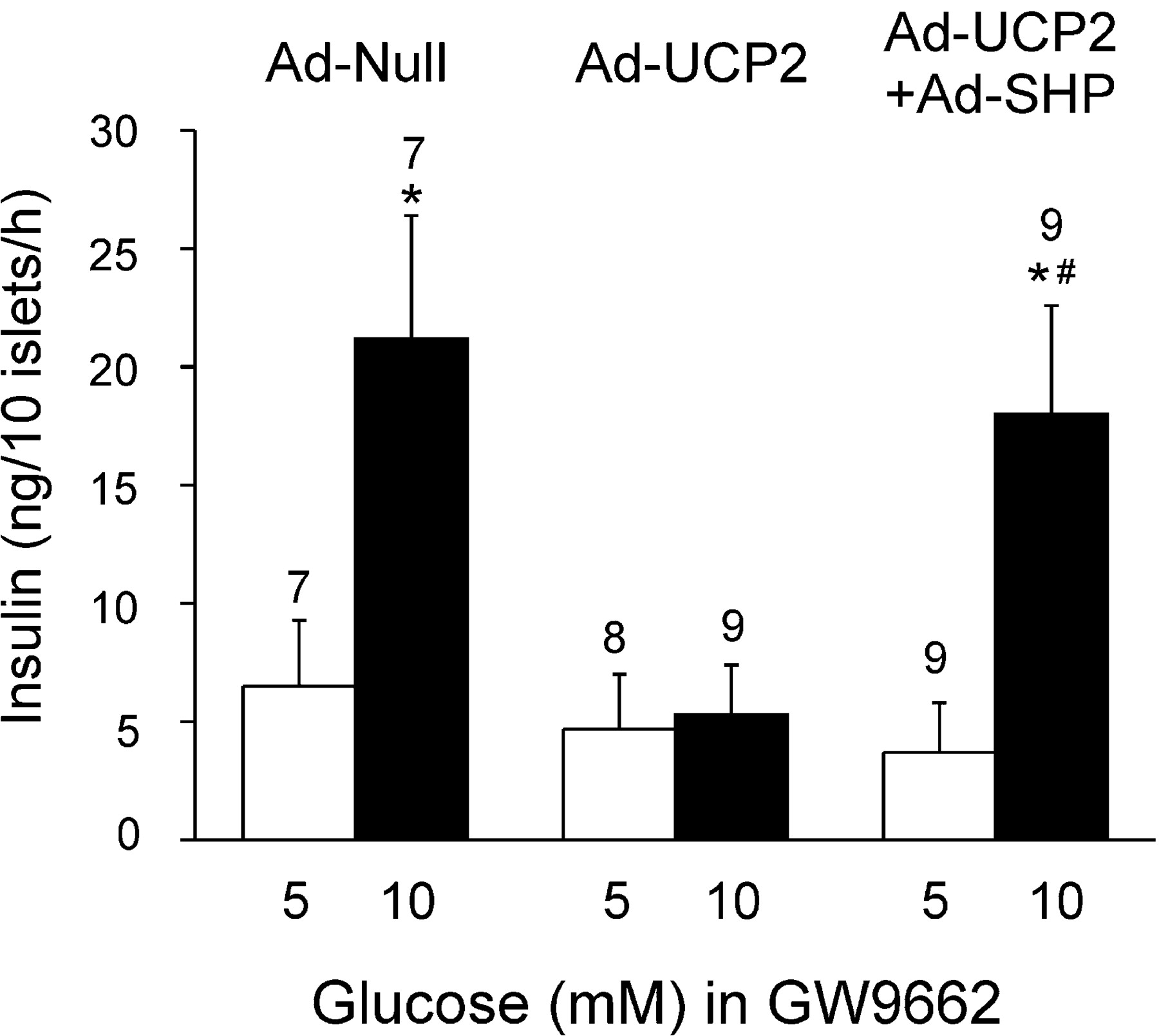