Effect of induced Cdx-2 expression on insulin mRNA expression in two selected RIN-Cdx-2 clones. RIN-Cdx-C13 and RIN-Cdx-C14 clones were grown in the absence or presence of 5 μM Pon A for 4, 8, 12, 24 and 48 h. Approximately 10 μg total RNA were applied in Northern blotting to examine endogenous Cdx-2 (Cdx-2 (Endo)) and endogenous Cdx-2 (Cdx-2 (Endo)) mRNA expression. The same membrane was stripped, followed by hybridization with the insulin probe (Ins) and the 18S RNA probe (18S). InR1-G9 and the parental wild-type RIN-1056A (Rin WT) were included as the positive control for endogenous Cdx-2 expression and insulin gene expression respectively. After densitometrical analyses, activation folds on insulin mRNA expression by Pon A treatment at different time courses were determined, with the untreated cells as onefold. n/a: not applicable.

The effect of induced Cdx-2 expression on insulin hormone synthesis. The RIN-Cdx-C14 cell line and the parental wild-type RIN-1056A cell line were grown in the absence or presence of 5 μM Pon A for 4 and 8 h. Insulin content in cell lysates was measured by RIA. *P<0.05 as reported by Student’s t-test, and NS (not significant). n = 4.

Examination of the binding of Cdx-2 to the FLAT elements by EMSA. (A) Cdx-2-GST forms two complexes with both FLAT I (FI) and FLAT II (FII). An amount of 4 ng Cdx-2-GST fusion protein was incubated with indicated probe. Competition assay was conducted with a 100-fold unlabeled probe. Super-shifting was conducted by incubating 2 μl anti-Cdx-2 antibody with the reaction mixture for 1 h on ice before the addition of the labeled probe. GC: a subelement of the rat glu gene G1 enhancer element, which binds to native Cdx-2 (9); F: free probe. (B) Examination of the binding of the wild-type RIN-1056 A cell nuclear extract to the FLAT I element. An amount of 5 μg nuclear protein from untreated wild-type RIN-1056A cell line was incubated with labeled FLAT I probe, in the absence or presence of indicated unlabeled competitor, anti-Cdx-2 antibody (Cdx), or preimmune serum (NS). DNA-protein complexes are designated as C1–C4. F: free probe.

Cdx-2 cotransfection activates the expression of the fusion promoters containing FLAT I and FLAT II. BHK cells were cotransfected with 3 μg TK-LUC, or TK-LUC with one copy of FLAT I (FI-TK-LUC) or FLAT II (FII-TK-LUC), plus 3 μg pcDNA3 or pcDNA3-Cdx-2. Cells were harvested for LUC reporter gene analysis 20 h after the transfection. Relative LUC activity was calculated as the -fold increase with the activity obtained, using TK-LUC and pcDNA3 as onefold in the untreated cells defined as onefold (mean s.e., n = 3). *P<0.05; **P<0.01 as reported by the Student’s t-test. 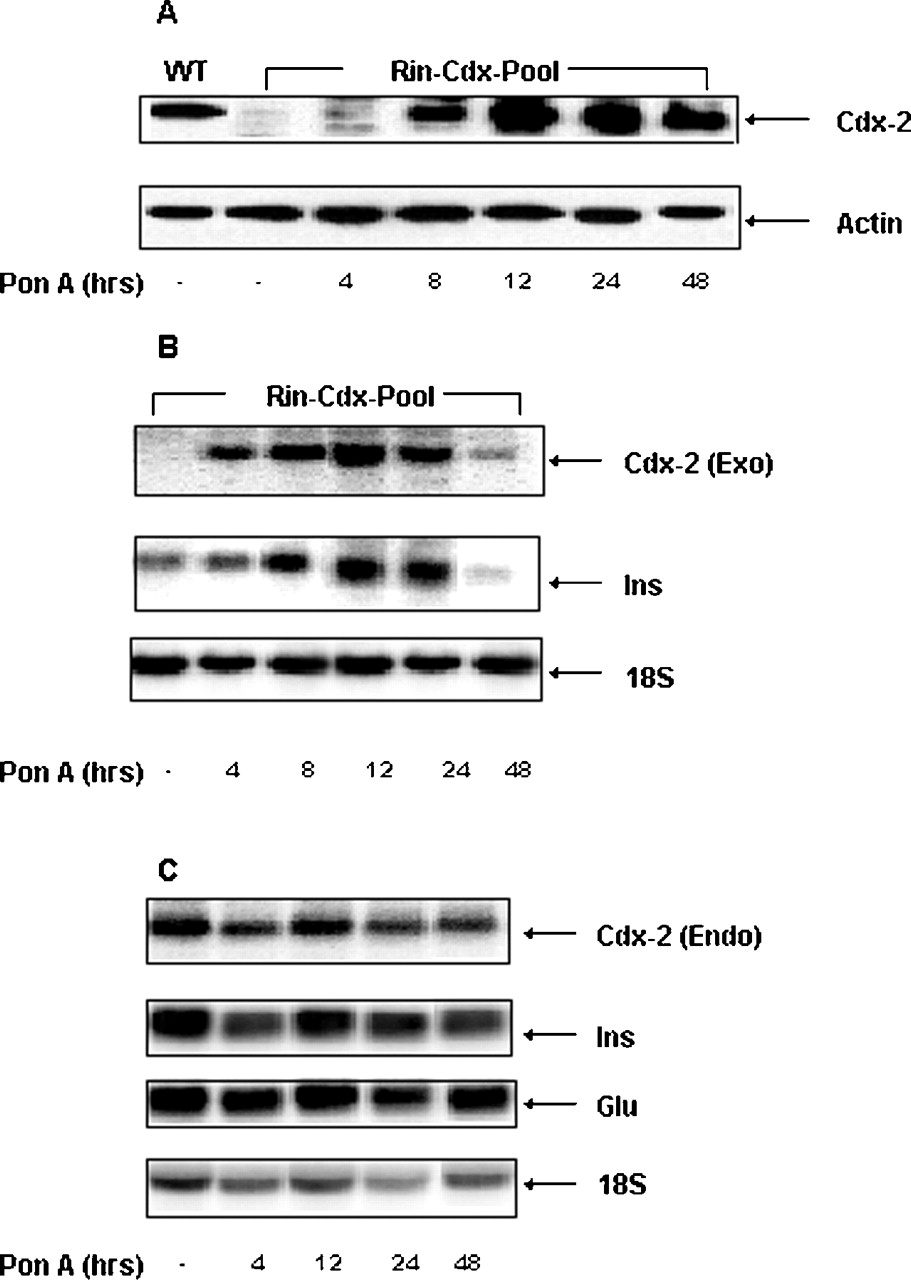 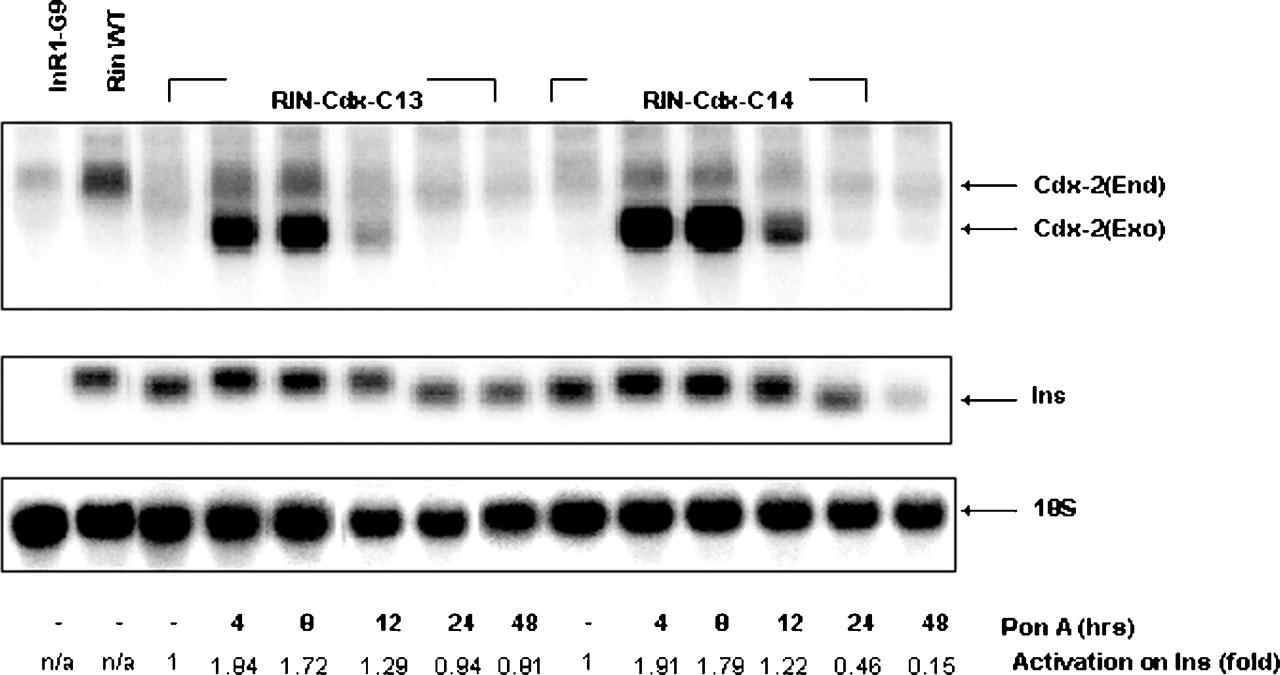 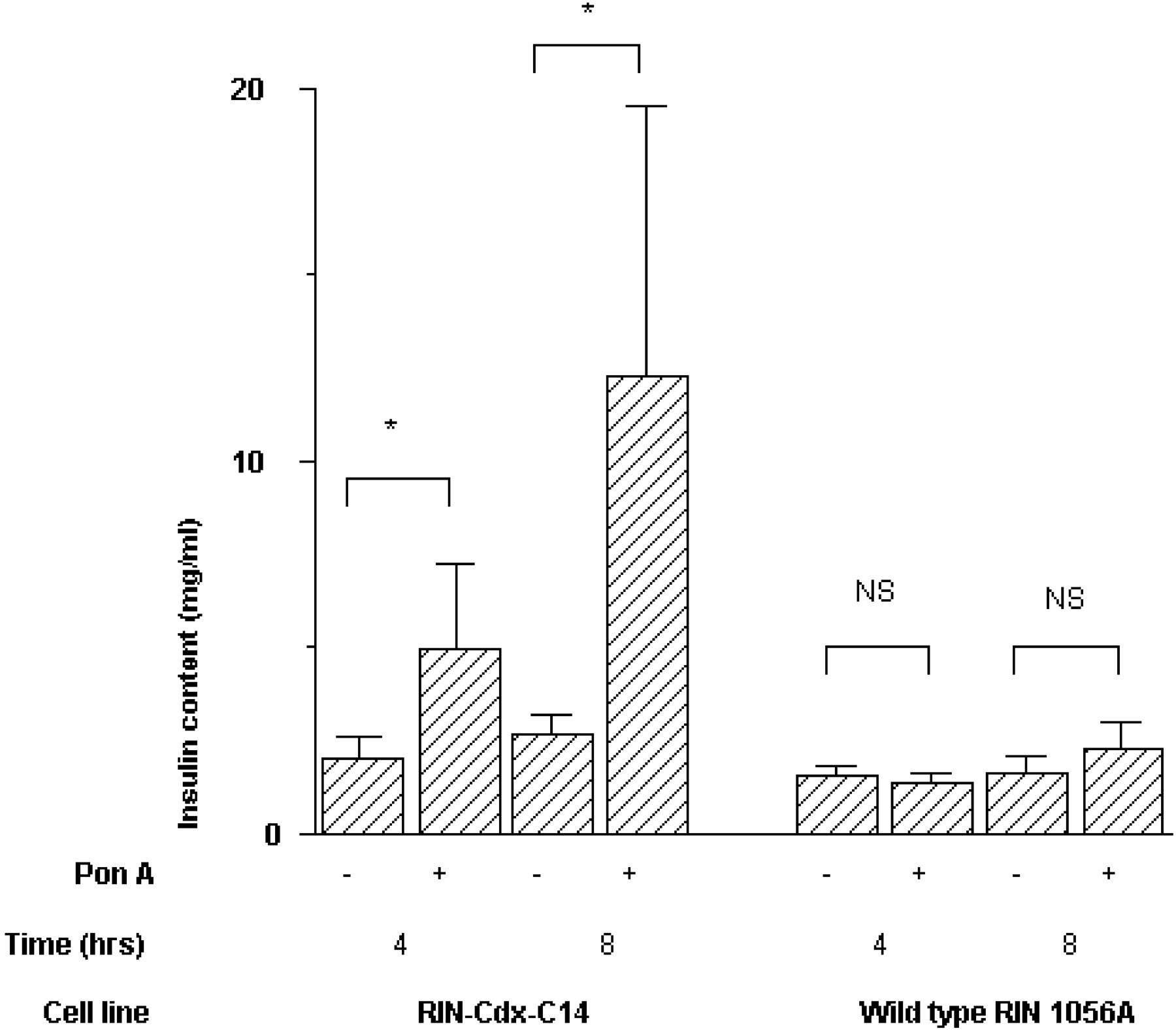 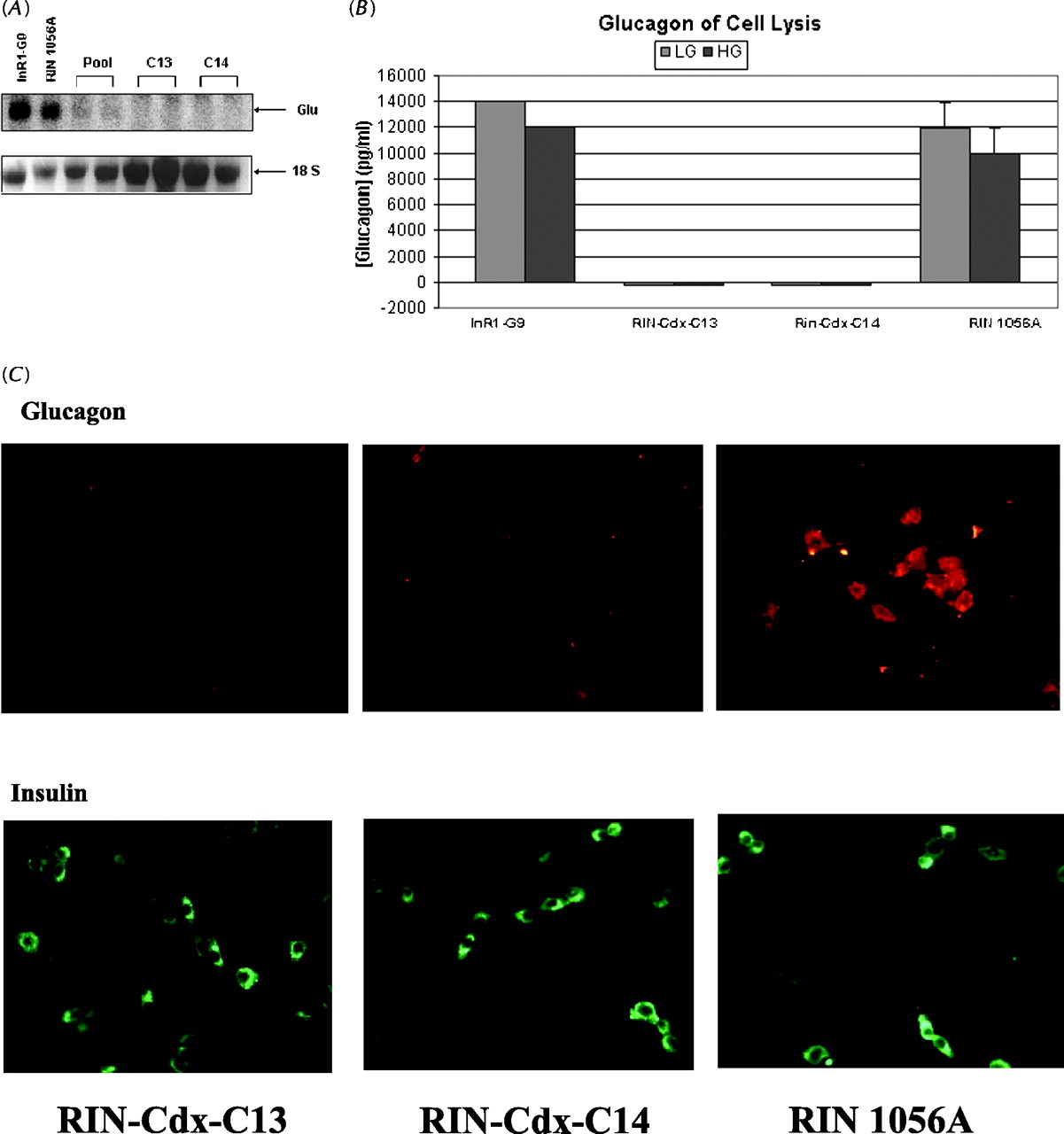 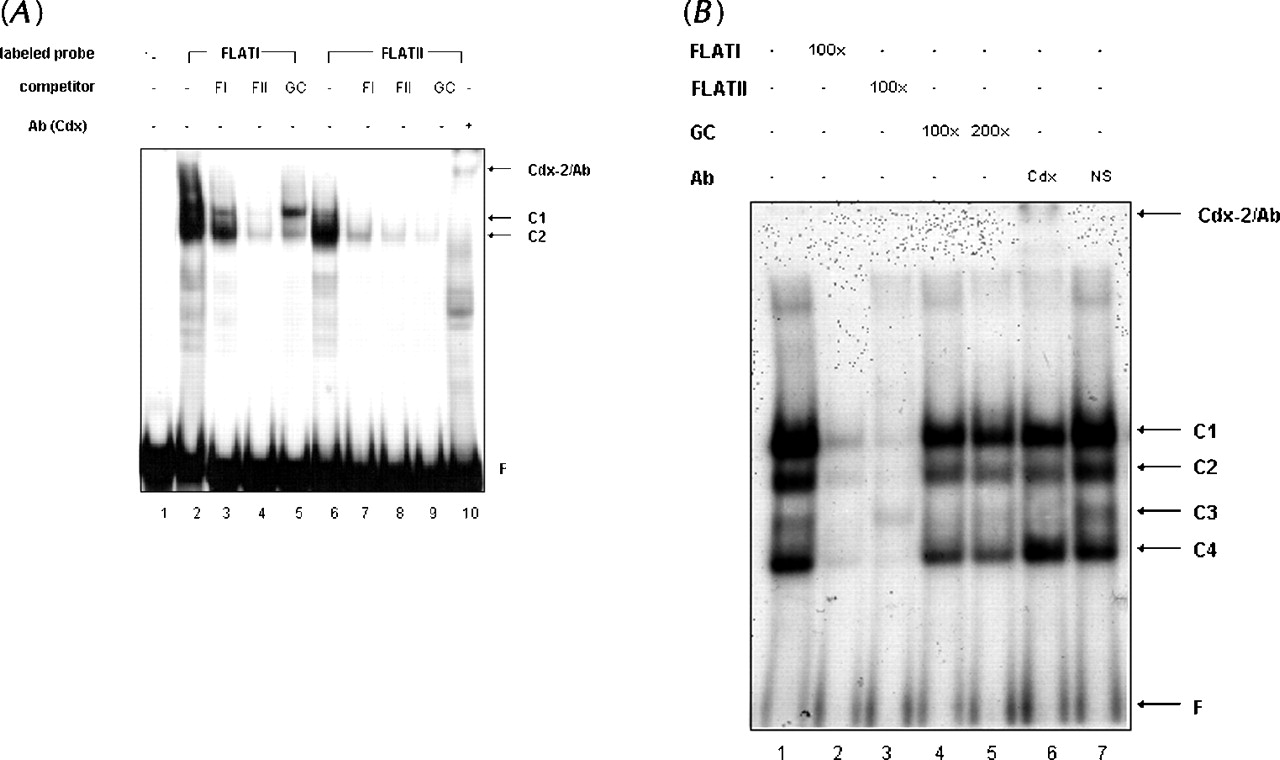 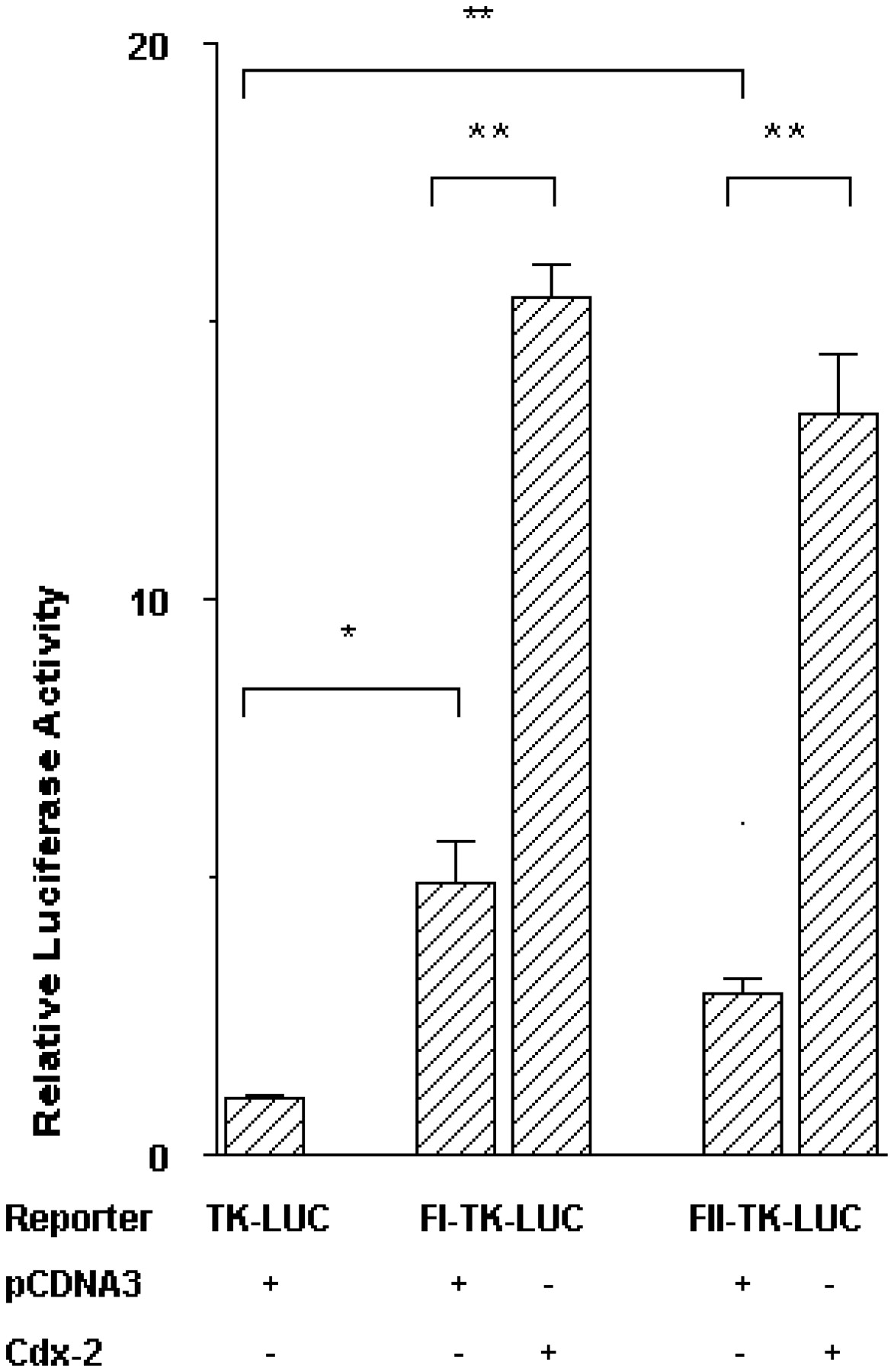 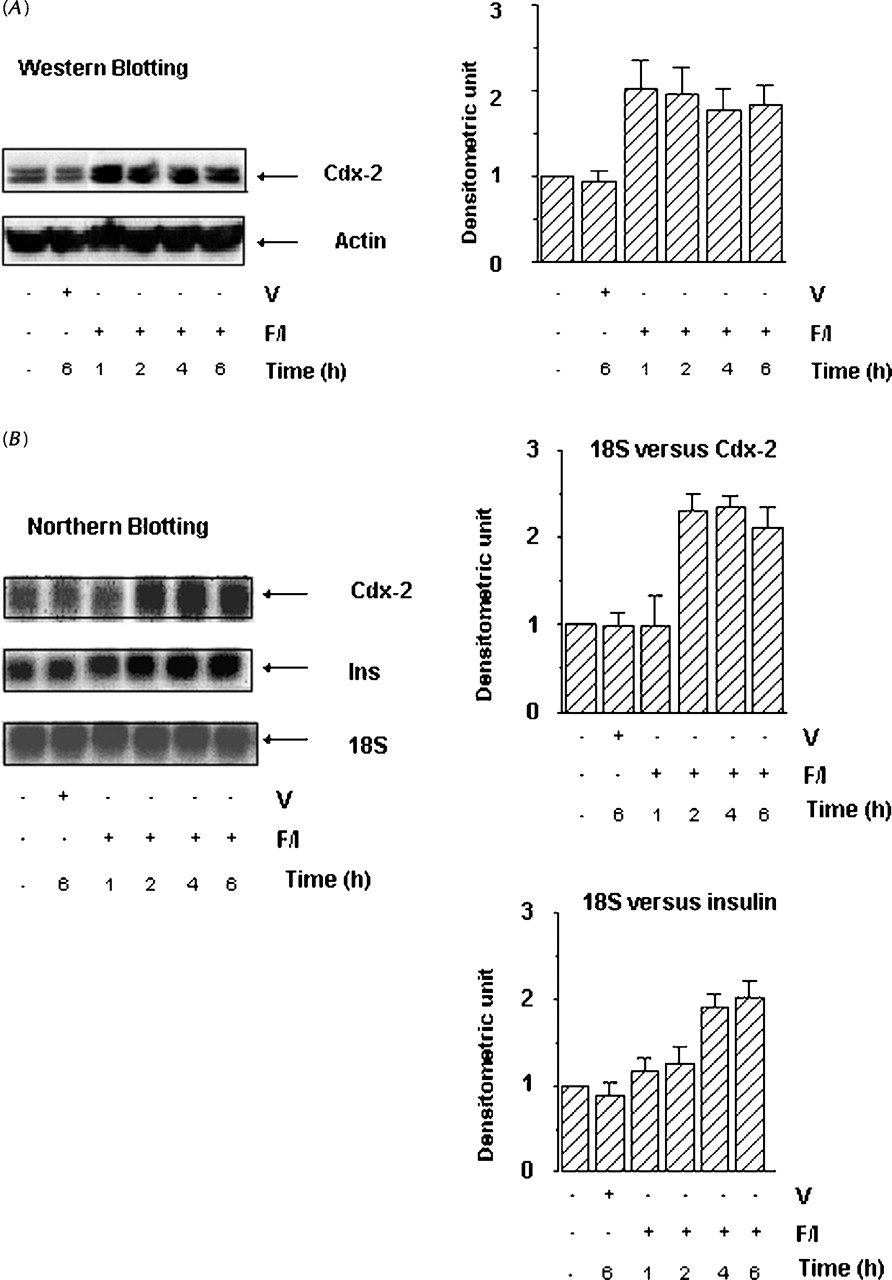 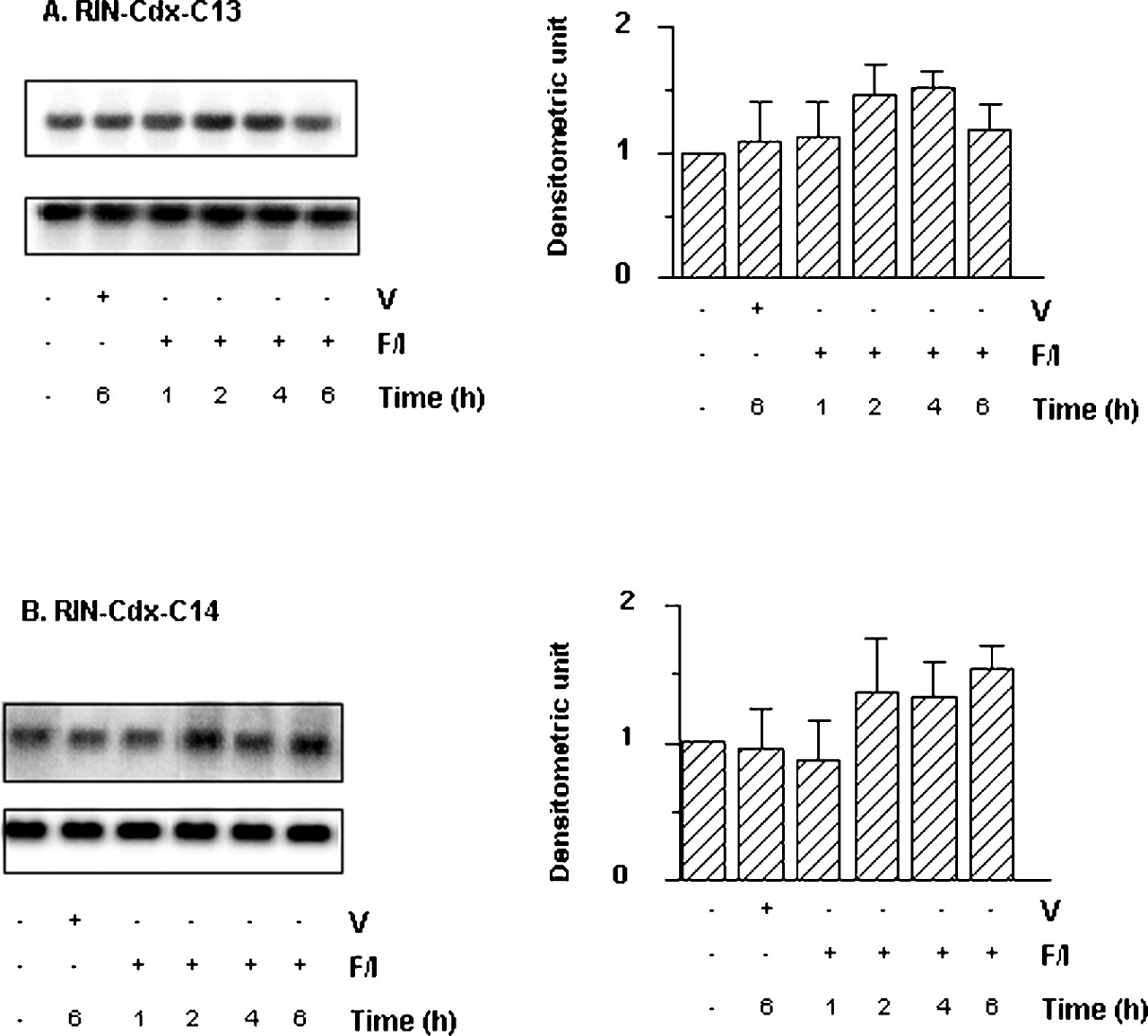