Changes in 70 kDa heat shock proteins in diabetic myocardium. (A) The abundance of Hsc70 in streptozotocin-induced diabetic rat (STZ-DM) myocardium. Myocardium was harvested from control and diabetic rats and myocardial proteins were immunoblotted for Hsc70. Immunoblotting with α-actinin served as controls. (B) Immunoblotting of Hsp70 in control and STZ-DM myocardium. No visible Hsp70 proteins can be detected in normal or diabetic myocardium. Immunoblot of Hsc70 in cultured neonatal cardiomyocytes served as positive control. IGF-I receptor protein (IGF-IR) was visibly detected in the myocardium. (C) Time-course effects of diabetes on myocardial Hsc70 and IGF-I receptor. Each bar represents the mean ± s.e. summarized from multiple experiments (n = 6–8 animals in each group). The abundance of heat shock protein was normalized to the abundance of α-actinin in each sample. *P < 0.05 vs the controls.

The effects of insulin and phlorizin on cardiac Hsc70 and IGF-I receptor in streptozotocin-induced diabetic rat. When indicated, diabetic rats were treated with insulin or phlorizin for 6 days after the induction of diabetes. (A) Representative photo of myocardial Hsc70 and IGF-IR immunoblot. (B) Densitometry analysis of myocardial Hsc70 and IGF-IR. Bar graph represents densitometry analysis from multiple experiments (n = 6–8 animals in each group). The abundance of heat shock protein was normalized to the abundance of α-actinin in each sample. Data represent means ± s.e. *P < 0.05 vs controls; †P < 0.05 vs untreated diabetes. 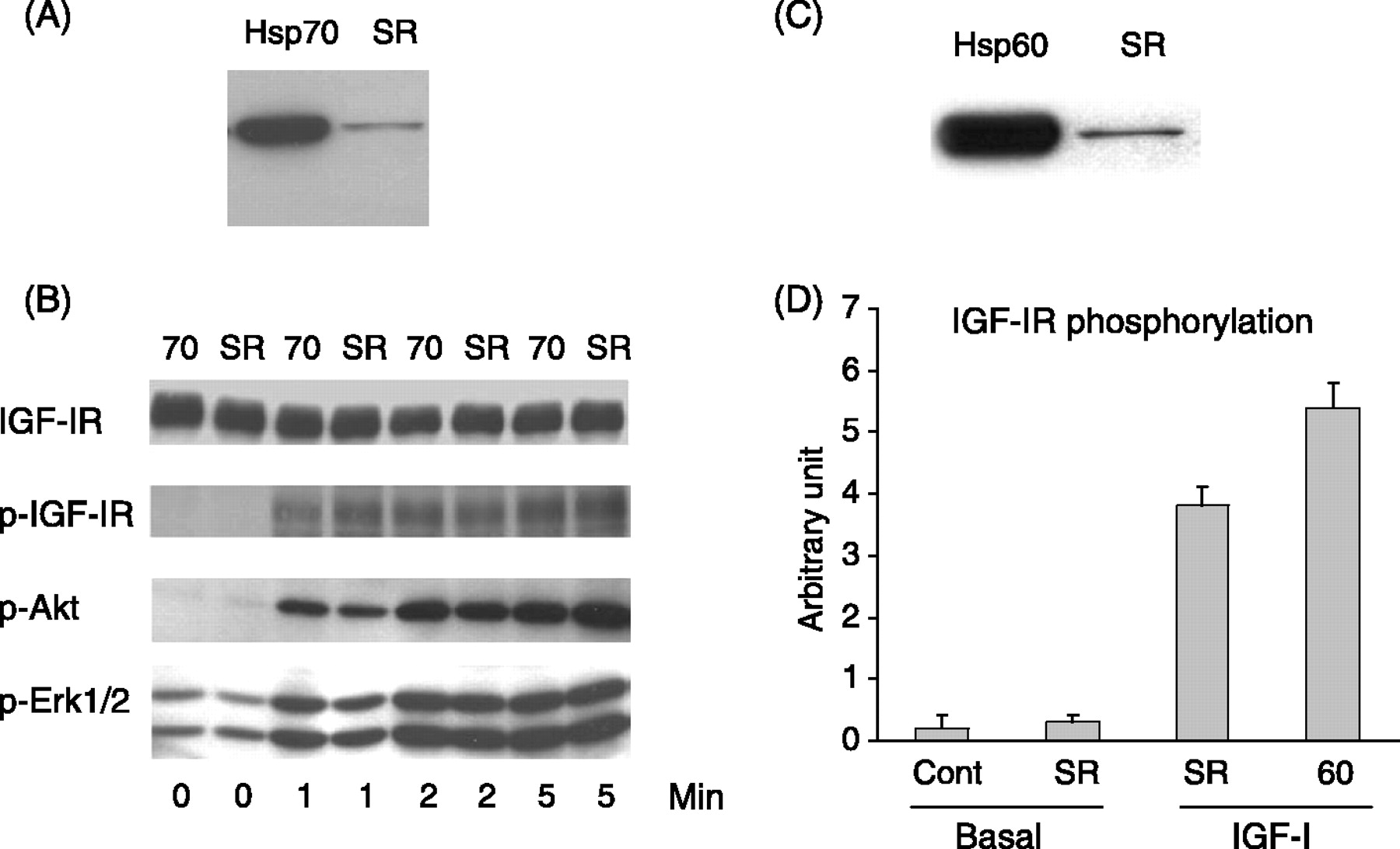 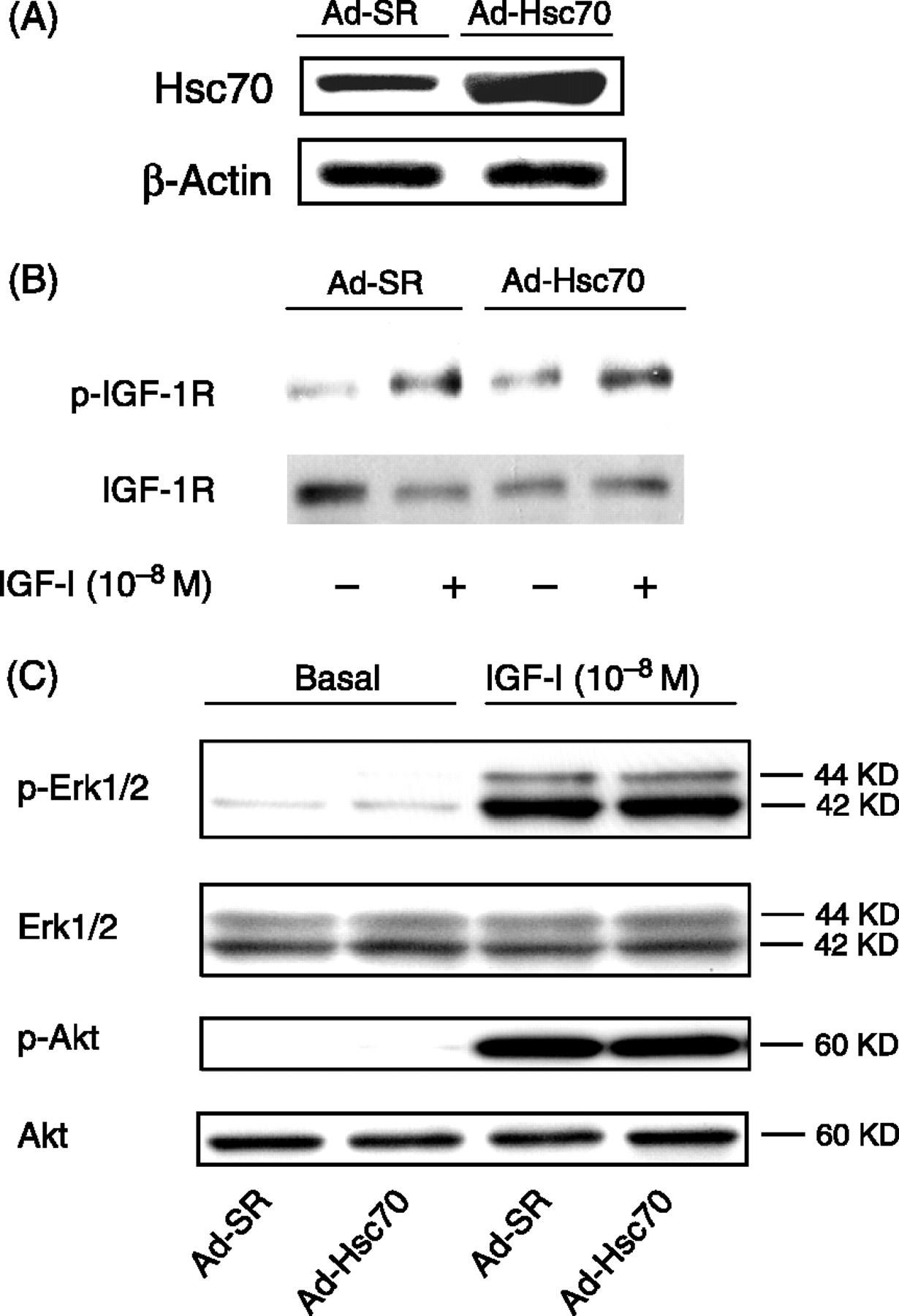 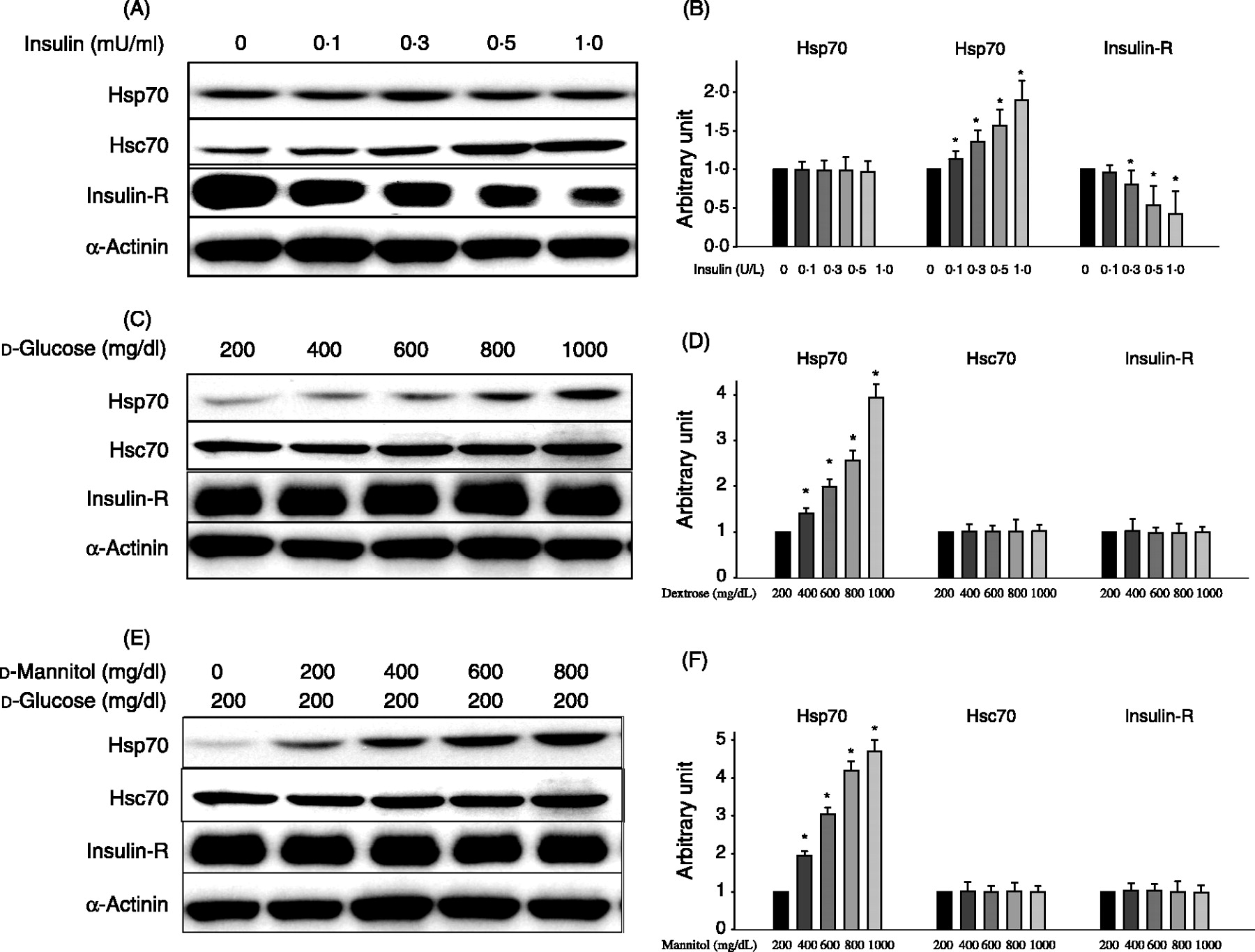 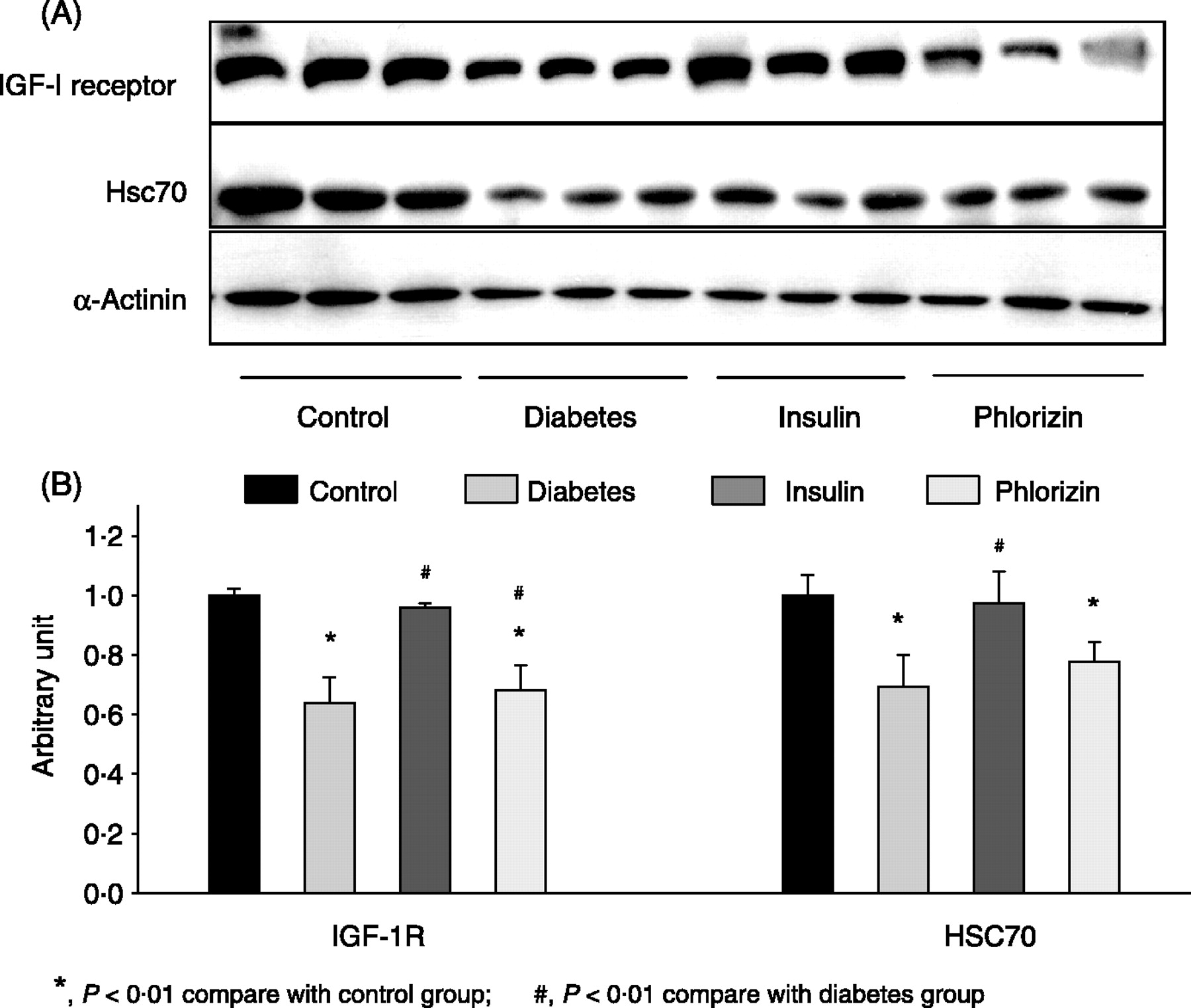 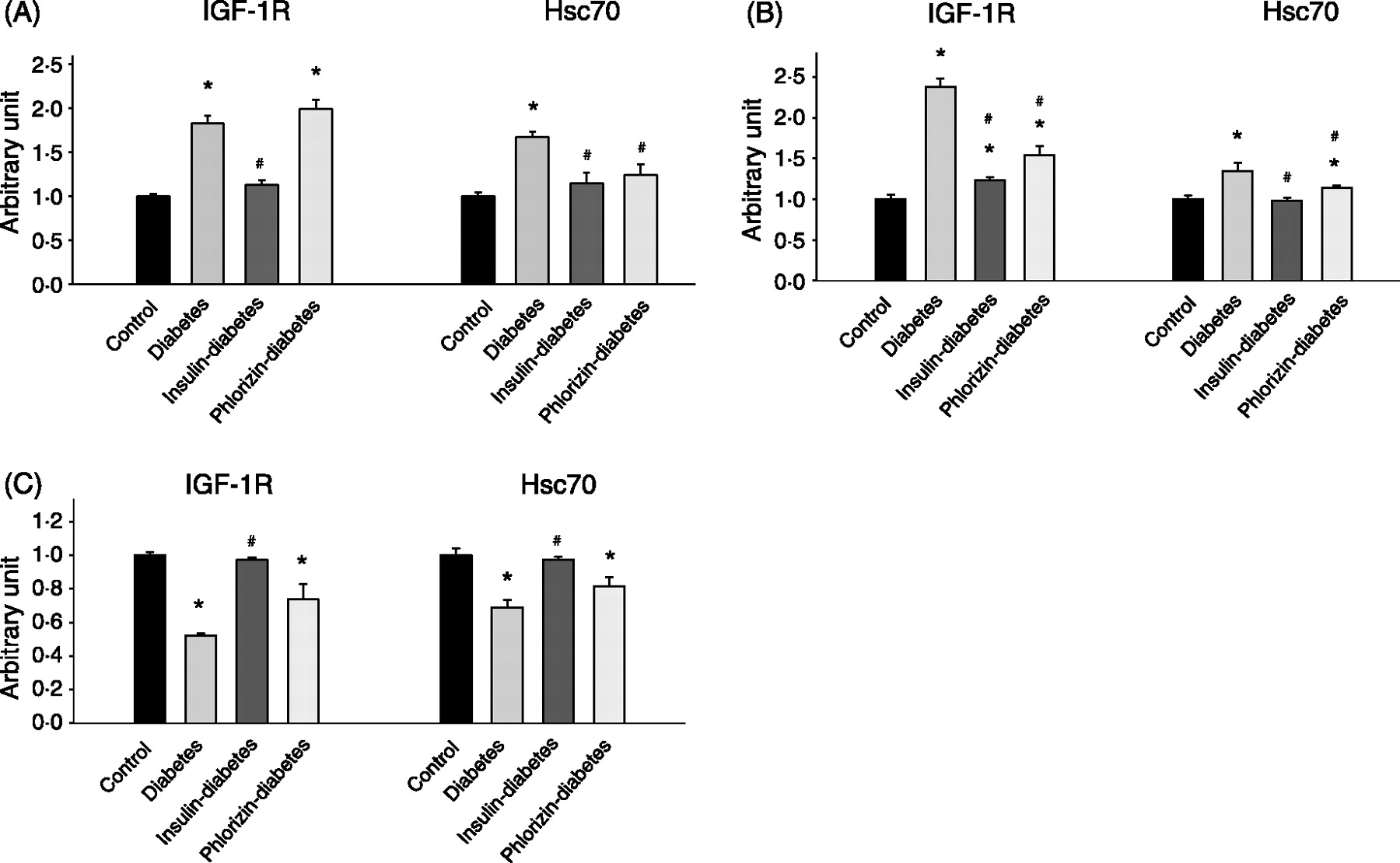