The neuroendocrine system of invertebrates: a developmental and evolutionary perspective

Neuroendocrine control mechanisms are observed in all animals that possess a nervous system. Recent analyses of neuroendocrine functions in invertebrate model systems reveal a great degree of similarity between phyla as far apart as nematodes, arthropods, and chordates. Developmental studies that emphasize the comparison between different animal groups will help to shed light on questions regarding the evolutionary origin and possible homologies between neuroendocrine systems. This review intends to provide a brief overview of invertebrate neuroendocrine systems and to discuss aspects of their development that appear to be conserved between insects and vertebrates.

Neuroendocrine control mechanisms are observed in all animals that possess a nervous system. Recent analyses of neuroendocrine functions in invertebrate model systems reveal a great degree of similarity between phyla as far apart as nematodes, arthropods, and chordates. Developmental studies that emphasize the comparison between different animal groups will help to shed light on questions regarding the evolutionary origin and possible homologies between neuroendocrine systems. This review intends to provide a brief overview of invertebrate neuroendocrine systems and to discuss aspects of their development that appear to be conserved between insects and vertebrates.

Structure of the neuroendocrine system. (A) Somata of neurosecretory cells (NSCs) are located in the central nervous system and receive neuronal input from presynaptic neurons. NSC axons project to peripheral neurohemal release sites that are frequently in close contact with endocrine cells targeted by the neurohormones released at the NSC terminals (after Scharrer & Scharrer 1963). (B) Ultrastructural aspects of neurotransmitter release (B′) and neurohormonal release (B″). Neurotransmitter release occurs exclusively at presynaptic sites from 50 nm vesicles. Neurohormones are stored in large vesicles found throughout the NSC and released outside synapses (after Golding & Pow 1988).

Hypothetical stages in the evolution of the endocrine and neuroendocrine systems. Cells releasing endocrine signals are likely to predate the appearance of a nervous system, since they can be found in extant metazoa lacking nerve cells (A). The first nervous system is thought to have possessed the structure of a basi-epithelial nerve net, similar to the one still found in present day cnidarians (B). At this stage, neurons and NSCs/endocrine cells most likely had evolved into distinct lineages of sensory cells integrated into the epidermis, the gastrodermis and the nerve net. A central nervous system integrating multimodal sensory input evolved in bilaterian animals (C). Populations of sensory NSCs involved in the regulation of fundamental biological processes, such as feeding and reproduction may have formed specialized complexes in the brain, pharynx, and gut of early bilaterians. During later stages of evolution (shown in (D) for the chordate lineage), NSCs and endocrine cells in general show the tendency of losing their sensory function, delaminating from the surface epithelium (epidermis, pharynx, and intestinal epithelium), and undergoing morphogenetic changes that produced dedicated endocrine glands, such as the pituitary, thyroid/parathyroid, and pancreatic islets.

Comparative overview of important elements of the neuroendocrine system in ((A) and (B)) annelids, (C) mollusks, (D) insects, and ((E) and (E′)) crustaceans. In all panels, the central nervous system is colored light blue; central NSCs are shown in violet, peripheral endocrine cells (targeted by the NSCs) in magenta, and vascular cells in light green. (A) Section of annelid brain (br). NSCs form fiber tracts (NSCtr) that terminate in contact with the glial/connective tissue layer covering the ventral brain surface. Other NSC axons penetrate the glial layer (B) and contact the pericapsular organ (pco), a presumed endocrine structure located between the ventral brain and the blood vessel (bv). (C) Schematic dorsal view of gastropod cerebral ganglion. Multiple populations of central NSCs are found in the brain (bgc, bag cells; cdc, caudo-dorsal cells; and ldc, latero-dorsal cells). In some cases, neurohemal release sites have been identified (cco, commissural neurohemal organ; and mln, median lip nerve). The medio-dorsal body (mdb), latero-dorsal body (ldb), and lateral lobe (ll) form endocrine structures closely associated with the brain and targeted by NSCs. (D) Posterior–dorsal view of insect neuroendocrine system. Central NSCs are located in the pars intercerebralis (PI) and pars lateralis (PL) of the protocerebrum, the tritocerebrum and subesophageal ganglion (seg), and the ventral nerve cord (vnc). Peripheral axons of these cells innervate the retrocerebral complex of endocrine glands via the nccI nerve (from PI), nccII (from PL), and nccIII (from subesophageal ganglion/tritocerebrum). Secretory axons of NSCs located in the ventral nerve cord terminate at neurohemal release sites associated with the glial sheath surrounding the nerve cord and peripheral nerves. The retrocerebral complex receiving NSC axons consists of the corpora cardiaca (cc) and corpora allata (ca), both of which are located close to the dorsal blood vessel (bv). The corpora allata produce juvenile hormone which, together with the steroid ecdysone produced and released by the prothoracic gland (ptg), control growth and molting. The stomatogastric nervous system (sns) contains further NSCs and is functionally closely connected to the corpora allata and corpora cardiaca. (E) and (E′) dorsal view of crustacean brain and neuroendocrine system. Central NSCs are located in the brain, particularly in the ‘X-organ’ (X) found in the optic lobe (ol in (E′)). Endocrine glands controlled by central NSCs are the sinus gland (sgl), postcommissural organ (pcoo), and pericardial organ (peo), the latter possibly homologous to the insect corpora cardiaca. The Y-gland (Y) produces ecdysone and represents a homolog of the insect prothoracic gland; likewise, the mandibular organ (mo) secretes methyl farnesoate which is chemically and functionally similar to insect juvenile hormone.

Embryonic development of the insect neuroendocrine system. ((A) and (B)) Sections of the anterior part of Oncopeltus embryo (after Dorn 1972). Parasagittal section in A illustrates the topology of the invaginating primordia of prothoracic gland (ptg, in ectoderm of labium (lb)) and corpora allata (ca, in ectoderm of maxilla (mx)). Transverse section in (A) shows later embryonic stage. Primordia of corpora allata and prothoracic gland form mesenchymal cell clusters migrating dorso-medially toward the dorsal blood vessel (bv). ((C) and (D)) Schematic drawings of heads of Drosophila embryo, dorso-lateral view, anterior to the left. (C) Depicts late extended germ band embryo (stage 11/12; corresponding to the stage shown for Oncopeltus in (A)). Primordia of the neuroendocrine centers of the brain, the pars intercerebralis (PI) and pars lateralis (PL), form placodes in the antero-medial neuroectoderm of the head. Primordia of the corpora allata (ca) and prothoracic gland (ptg) originate from the lateral ectoderm of the gnathal segments (lb, labium; mx, maxilla; and md, mandible). Primordia of corpora cardiaca (cc) are associated with the stomatogastric placodes (sns) which invaginate from the roof of the foregut (fg). At later stage (stage 16, depicted in (D)), the corpora allata, prothoracic gland, and corpora cardiaca have coalesced into the ring gland that surrounds the anterior end of the dorsal blood vessel (bv). Neurosecretory axons from the PI and PL reach the ring gland via the nccI and nccII nerves respectively. (E)–(G) Micrographs of heads of Drosophila embryos ((E) stage 11, lateral view; (F) stage 13, dorsal view; (G) stage 15, dorsal view) labeled with RNA probe against DN-cadherin (A Younossi-Hartenstein, F Wang & V Hartenstein (unpublished observations)). DN-cadherin is expressed in a cluster of cells that can be seen to delaminate from the maxillary ectoderm and migrate dorsally. At later stages, DN-cadherin labeling occurs in the prothoracic gland and, to a lesser extent, the corpora allata. (H) and (I) Micrographs of heads of Drosophila embryos (both stage 12, dorsal view, anterior to the left; from B De Velasco, T Erclik, D Shy, J Sclafani, HD Lipshitz, RR McInnes & V Hartenstein (unpublished observations)). (H) Primordia of the PI and PL are labeled with antibodies against Dchx1 (green) and FasII (red; Grenningloh et al. 1991). The Drosophila Rx gene (Eggert et al. 1998) is expressed in a large dorso-medial domain posterior of the PL primordium. (I) Labeling with the apical membrane marker anti-Crumbs (Tepass et al. 1990) reveals the placodeal nature of the PI and PL primordia. Arrows point at strongly Crumbs-positive pits which demarcate the centers of the invaginating placodes. Other abbreviations: br, brain; cdm, cardiogenic mesoderm; cl, clypeolabrum; fg, foregut; lg, lymph gland; md, mandible; mg, midgut; ph pharynx; and vnc, ventral nerve cord.

Molecular determinants of embryonic neuroendocrine system development in vertebrate ((A) and (C)) and Drosophila ((B) and (D)). All panels show schematic lateral views of anterior part of embryos (anterior to the left, dorsal up). ((A) and (B)) Postgastrula stage embryos. The eye field forms in the anterior domain of the neural plate. The anlage of the hypothalamus represents the medial part of the eye field; the anlage of the pituitary (anterior lobe) is located anteriorly adjacent to the hypothalamus. In Drosophila, the anlage of the pars intercerebralis/pars lateralis is located near the midline of the head neuroectoderm, anteriorly adjacent to the eye field. The anlagen of the corpora cardiaca and stomatogastric nervous system (SNS) map anterior to the head neuroectoderm. In the later stage vertebrate embryo (C), hypothalamus and anterior pituitary are seen in their primordial state. The primordium of the anterior pituitary, called Rathke’s pouch, invaginates from the roof of the stomodeum and comes into contact with the primordium of the hypothalamus. In a Drosophila embryo of a corresponding stage (D), the primordium of the SNS forms three invaginating placodes in the roof of the foregut. Precursors of the corpora cardiaca are associated with the SNS primordium. The expression pattern of relevant signaling pathways and transcription factors (boxed) involved in neuroendocrine system specification is indicated. 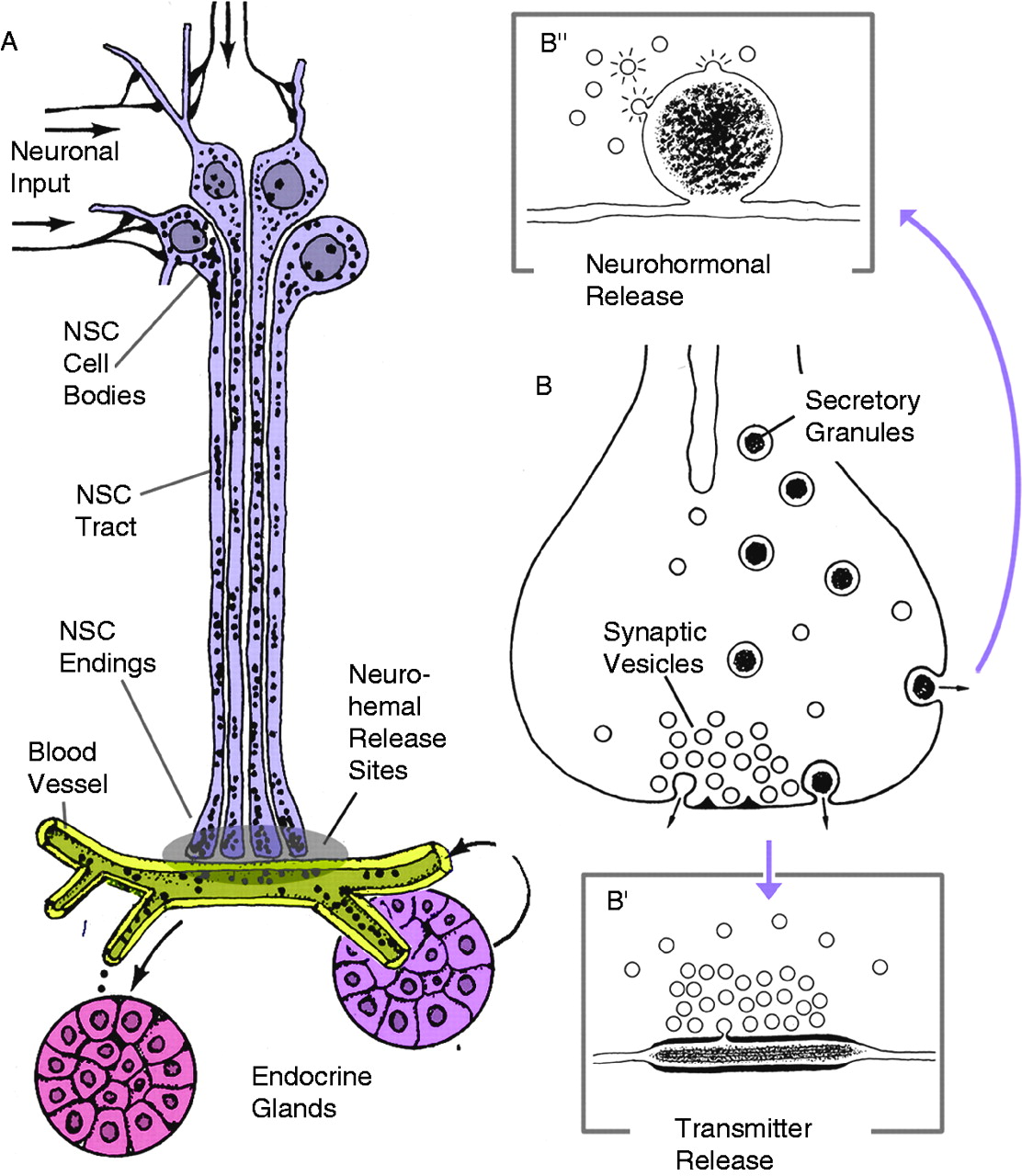 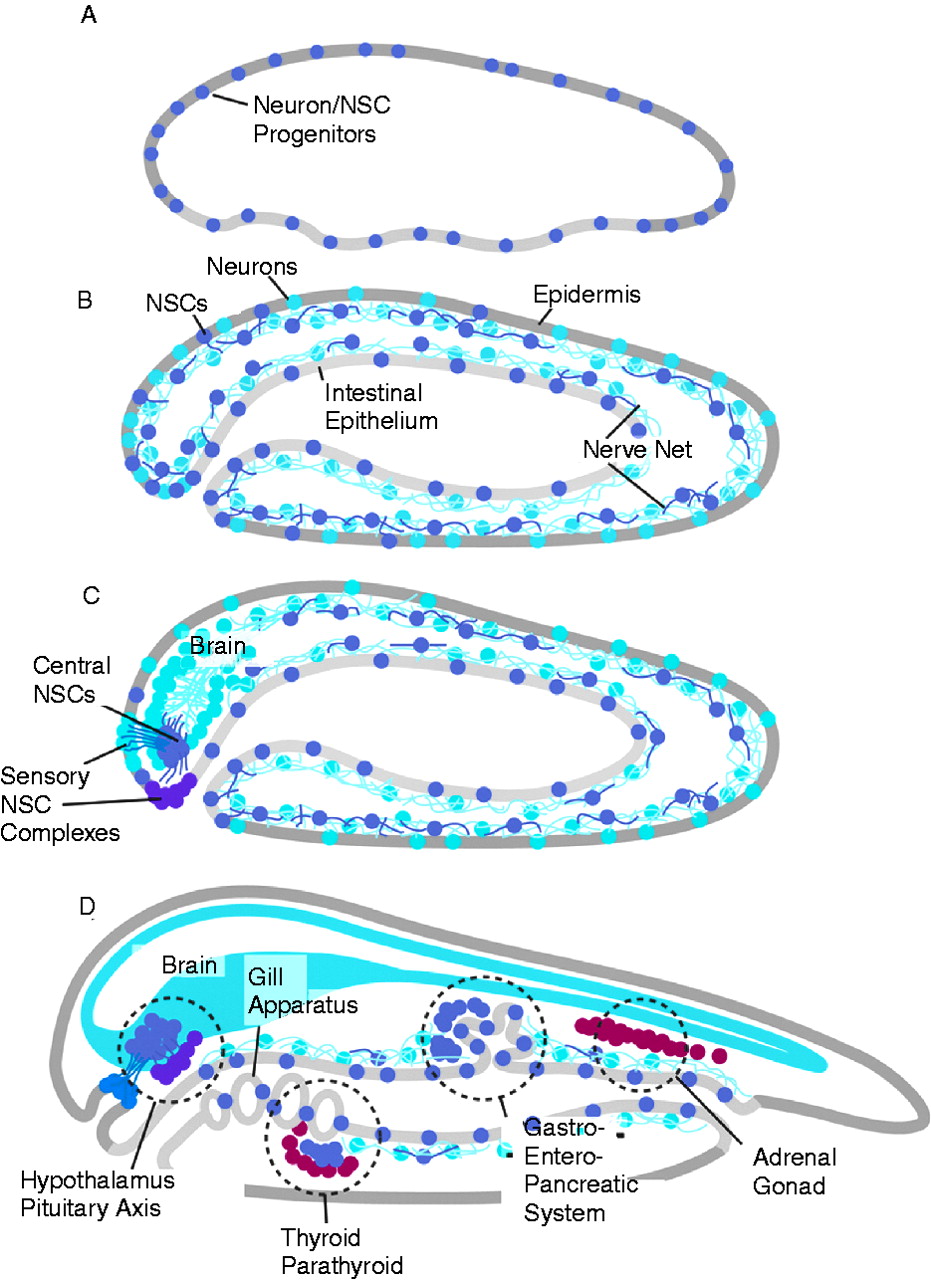 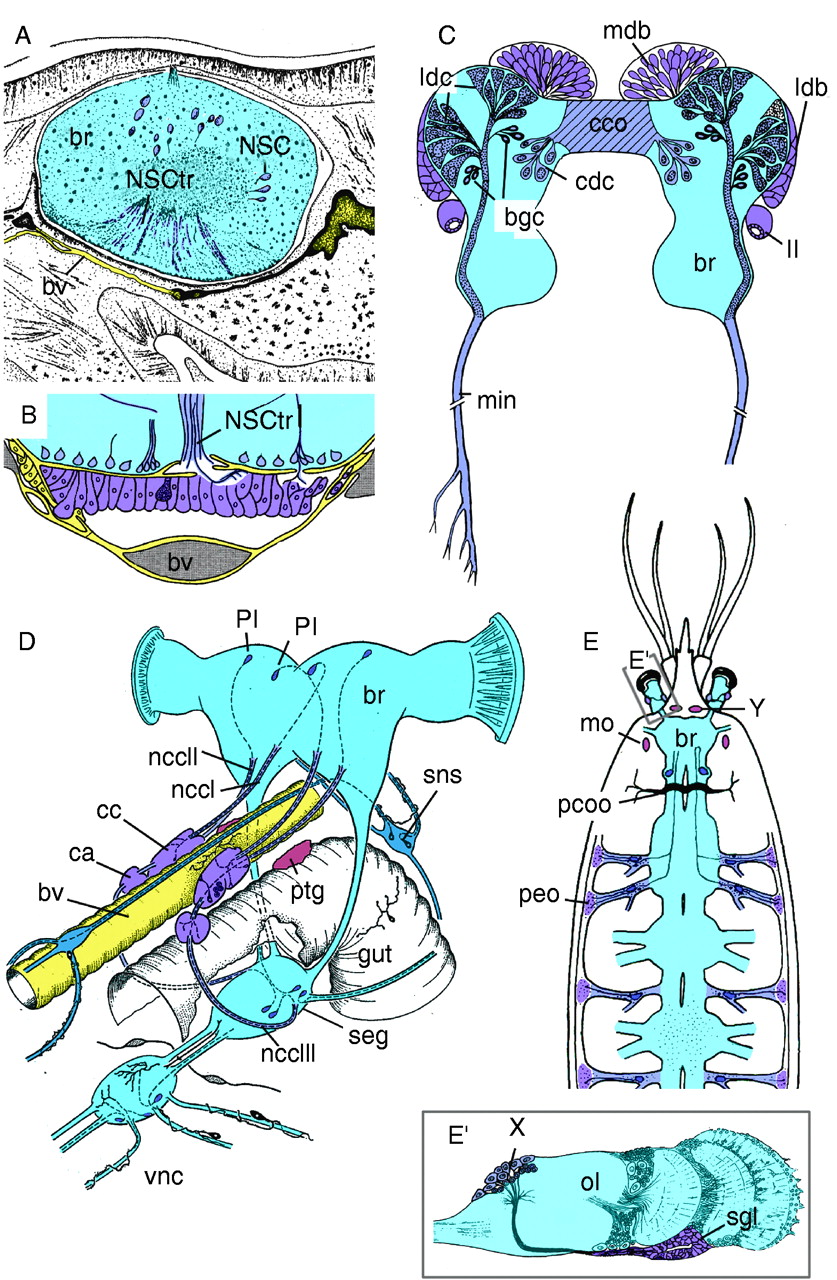 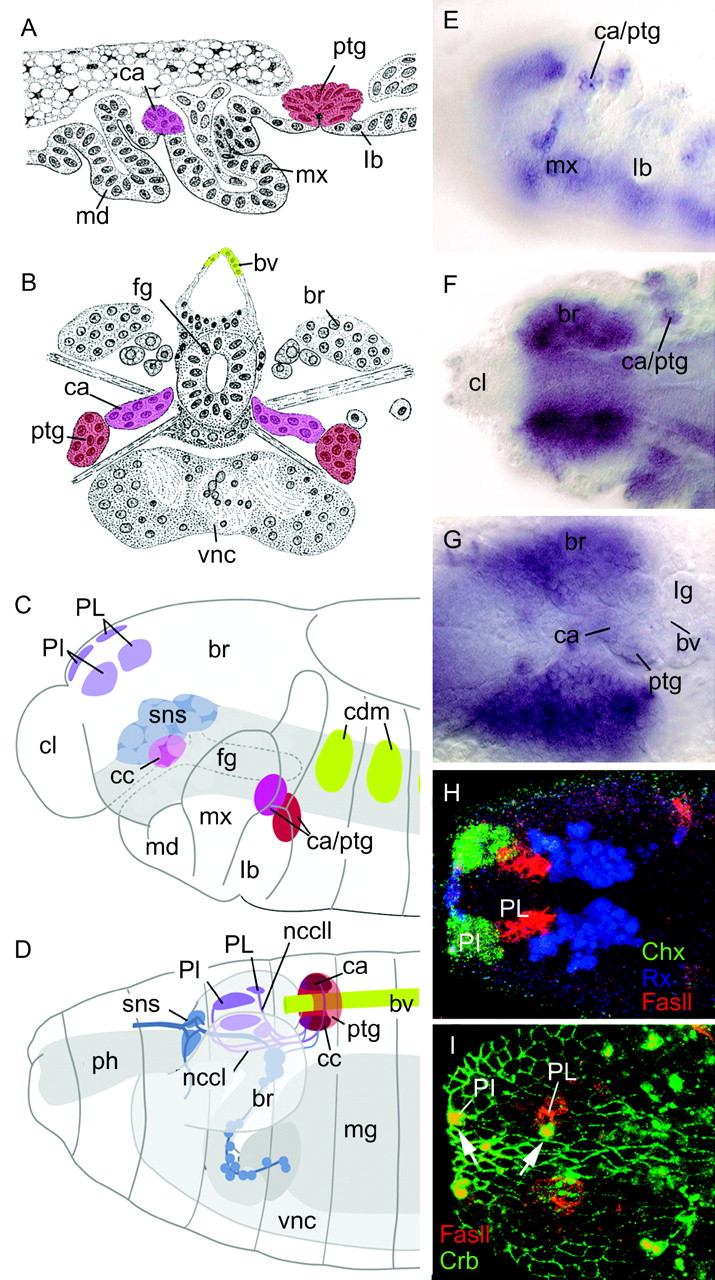 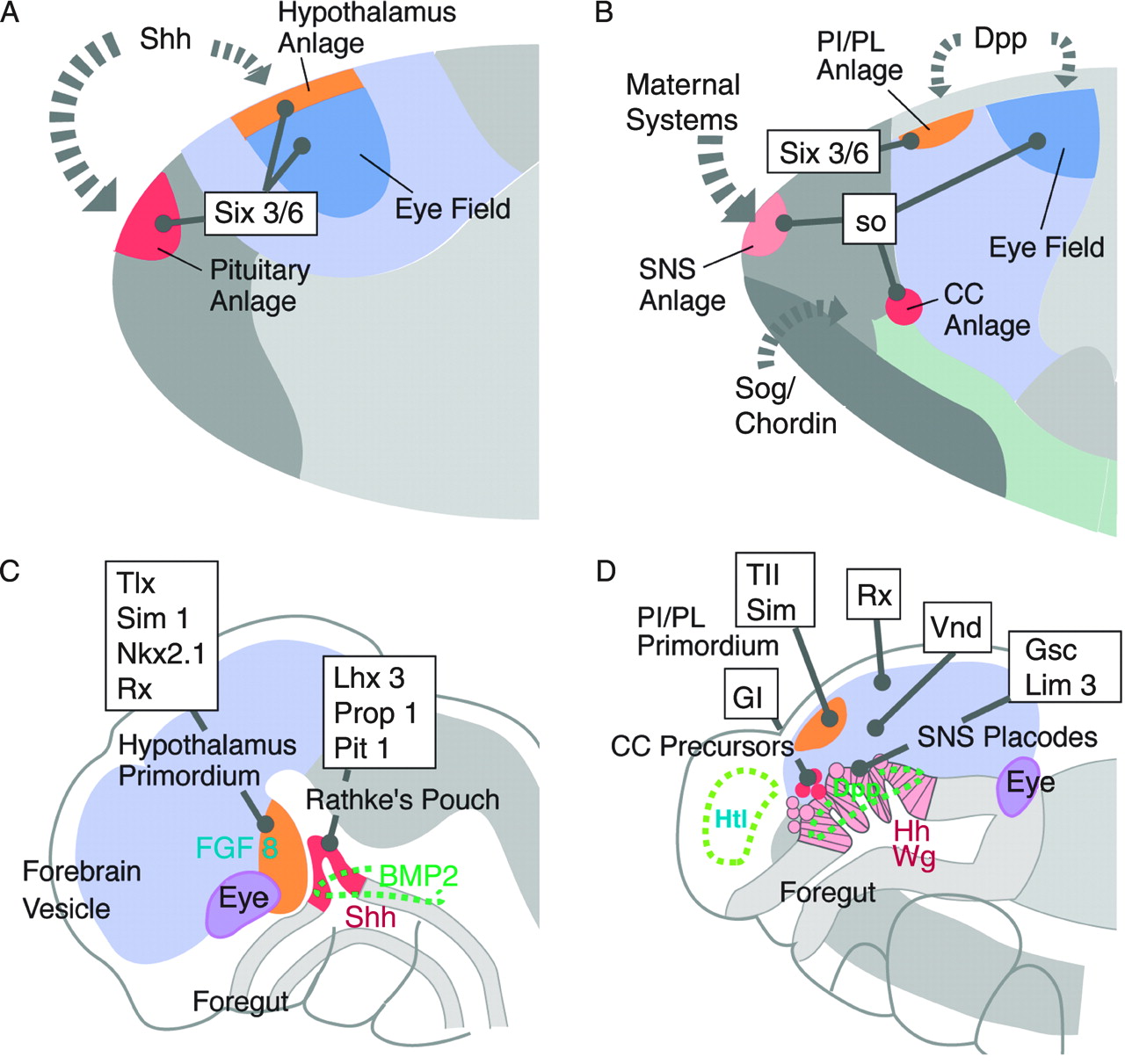