T3 prevented Fas/TNFα-induced activation of caspase-8 and DNA degradation in mouse hepatocytes. (A) Hepatocytes were pretreated with the following agents separately or in combinations: 150 nM T3 or rT3 for 2 h, TNFα (10 ng/ml) or Fas (0.5 μg/ml) + ActD (0.2 μg/ml) for 4 h; 1 μM amiodarone; StSp (1 μM) for 4 h; 60 μg/ml CHX (60 min), 500 nM KT-5720, 10 μM U0126, and 60 μM EIPA. Cell lysates were subjected to SDS-PAGE and caspase-8 activation was detected by immunoblotting using anti-caspase-8 antibody that recognizes the 18 kDa active fragment of caspase-8 (p18). Equal protein loading was confirmed by actin staining of the blot. The bar graphs represent band intensities obtained from three individual experiments. Results were normalized by actin and expressed as means ± s.d. *P<0.05 versus medium (control). (B) Fragmented DNA was obtained from 5 × 105 cells as described in Materials and Methods and loaded in each lane. DNA ladder of 123 bp is marked as STD (standard). Experiment has been repeated four times. One representative experiment is shown.

In vivo DRLs-induced apoptosis is enhanced in hypothyroid mice. (A) Hypothyroid mice demonstrated higher Fas/TNFα-induced activation of caspase-8 after exposure to Fas/TNFα for 6 and 10 h. The bar graphs represent p18 caspase-8 band intensities from three individual experiments. Results were normalized by actin and expressed as means ± s.d. *P<0.05 (DRLs-treated versus nil). (B) Fas and cFLIP expressions were determined by immunoblotting of hepatocyte lysates from in hypo- and euthyroid mice. All experiments have been repeated at least thrice and one representative experiment is shown. 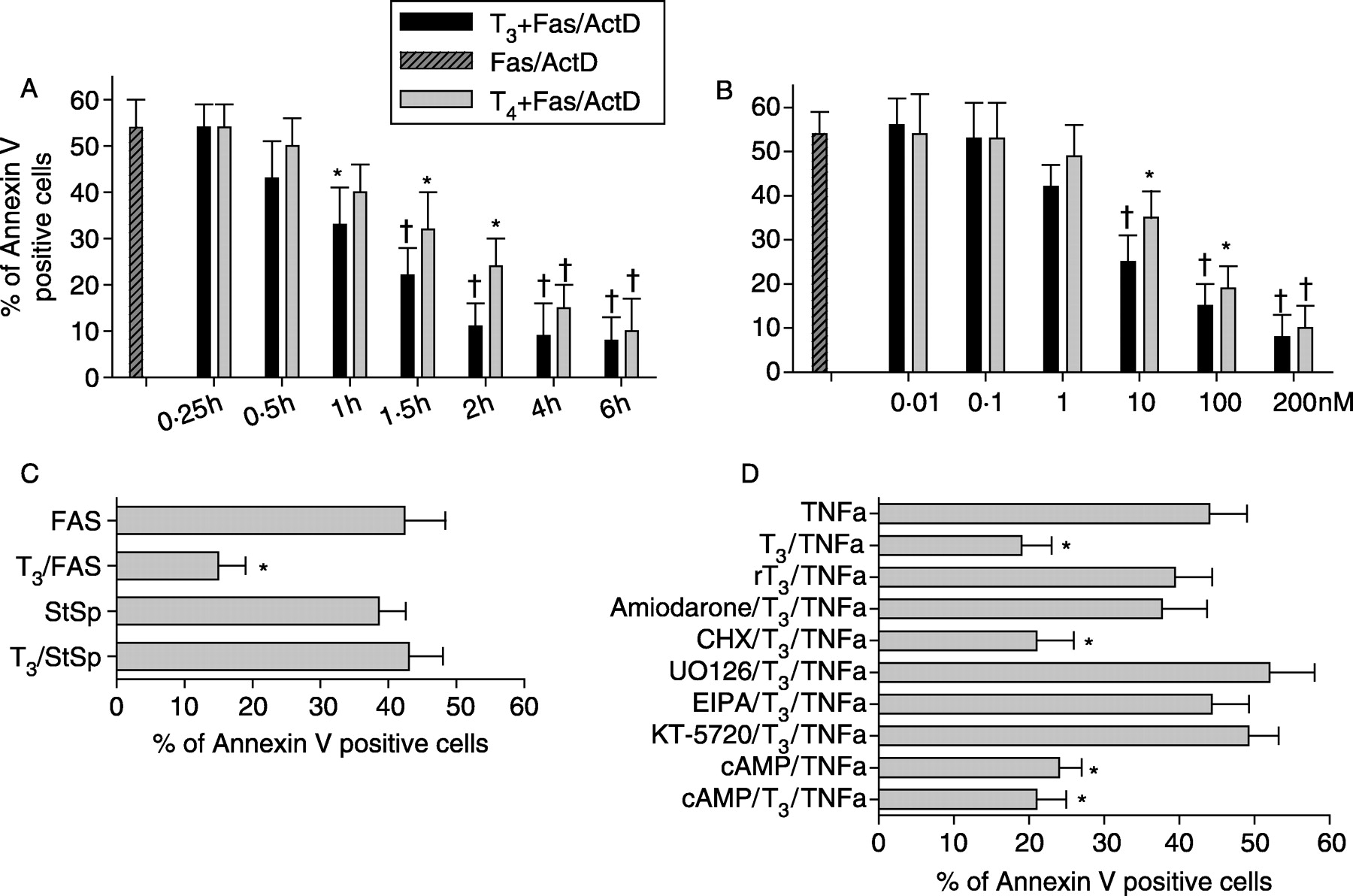 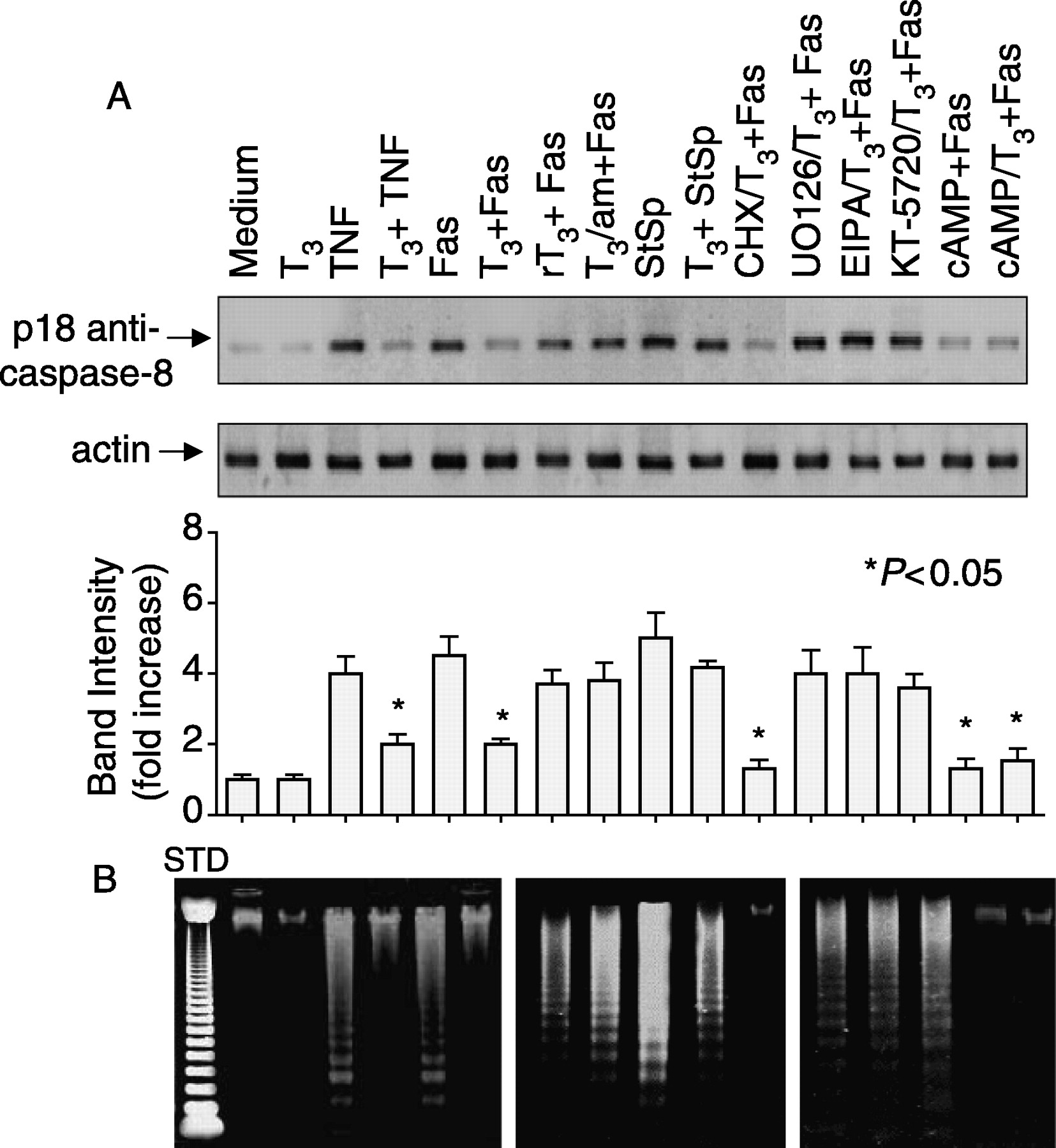 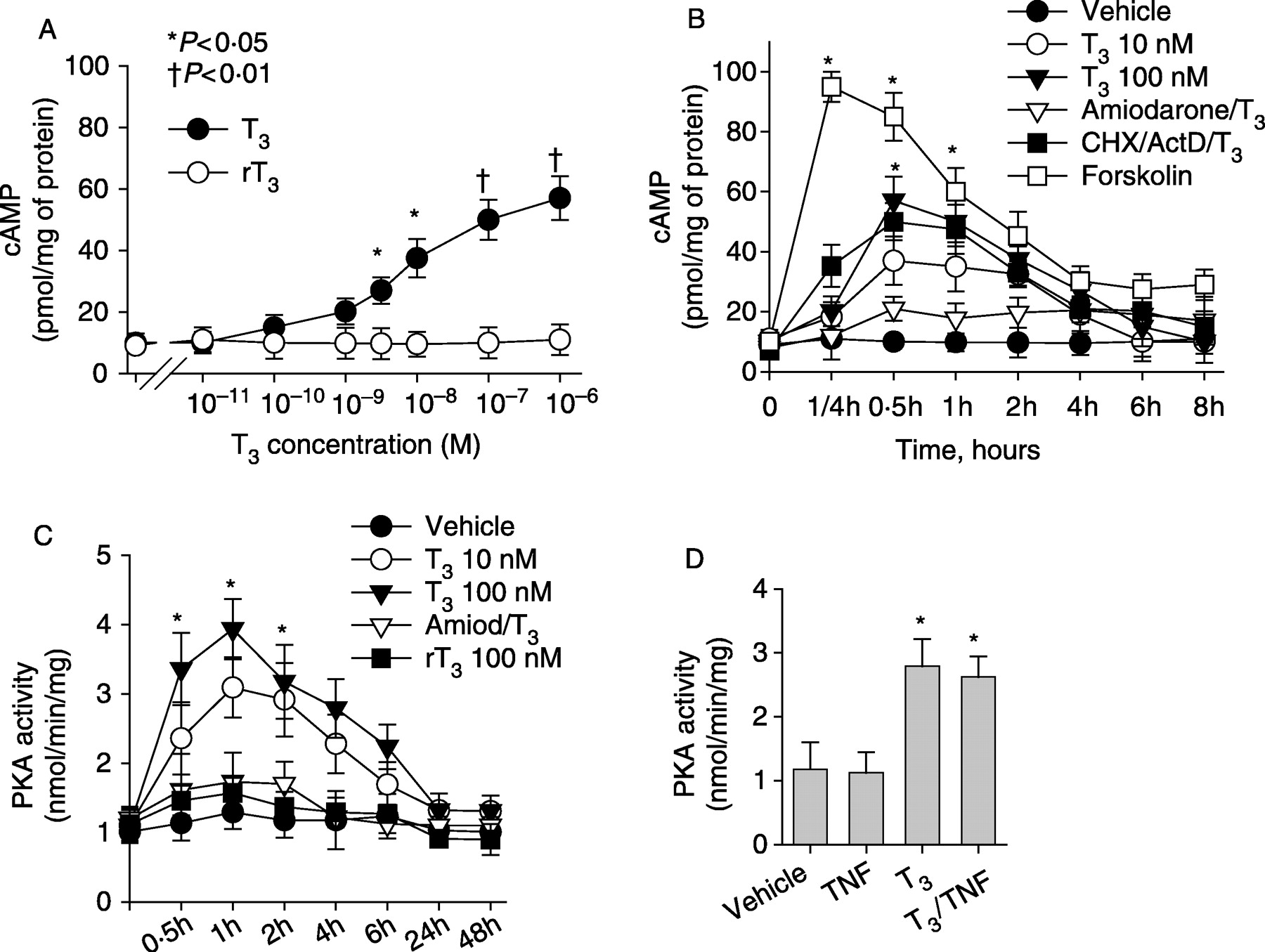 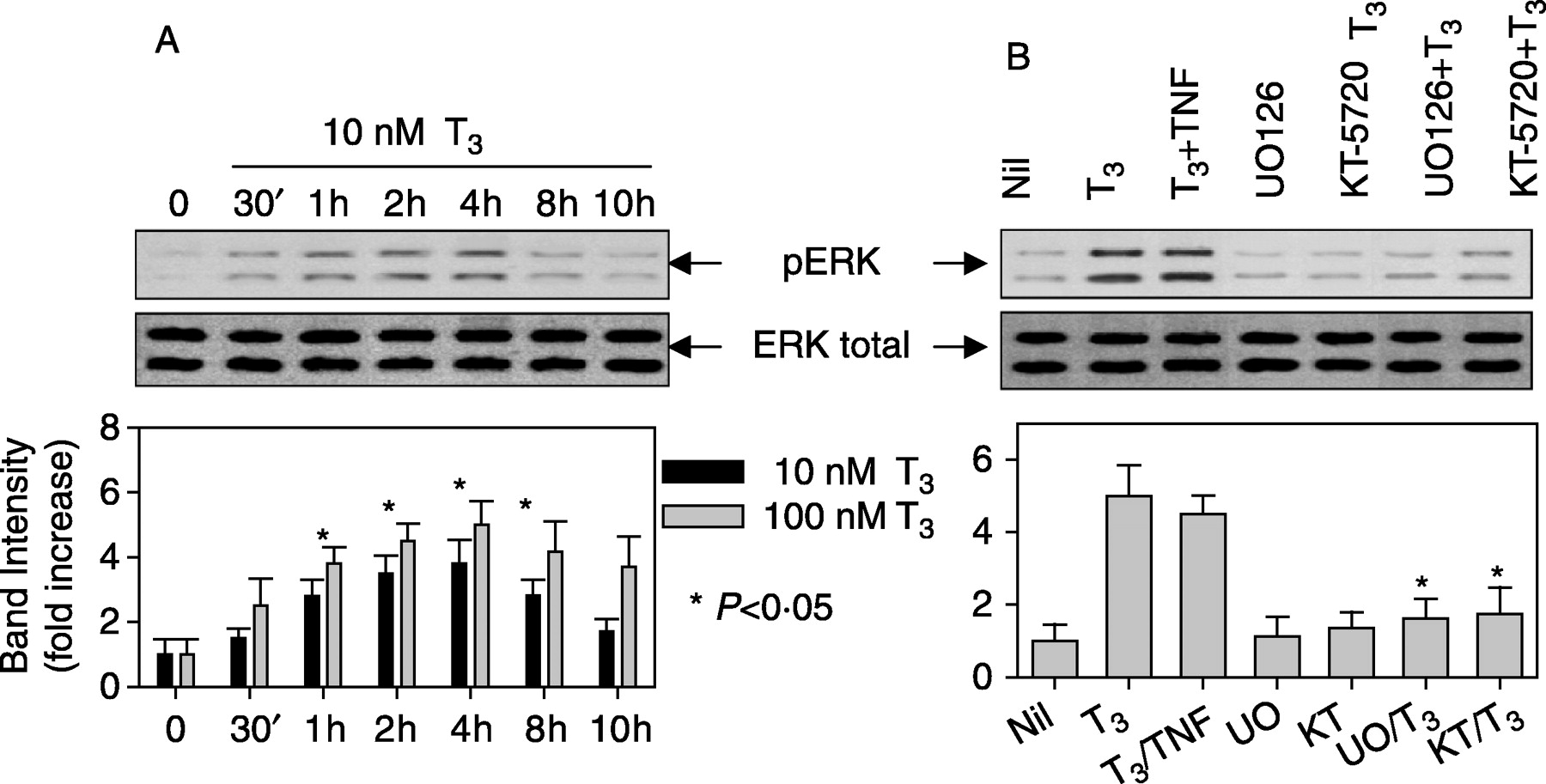 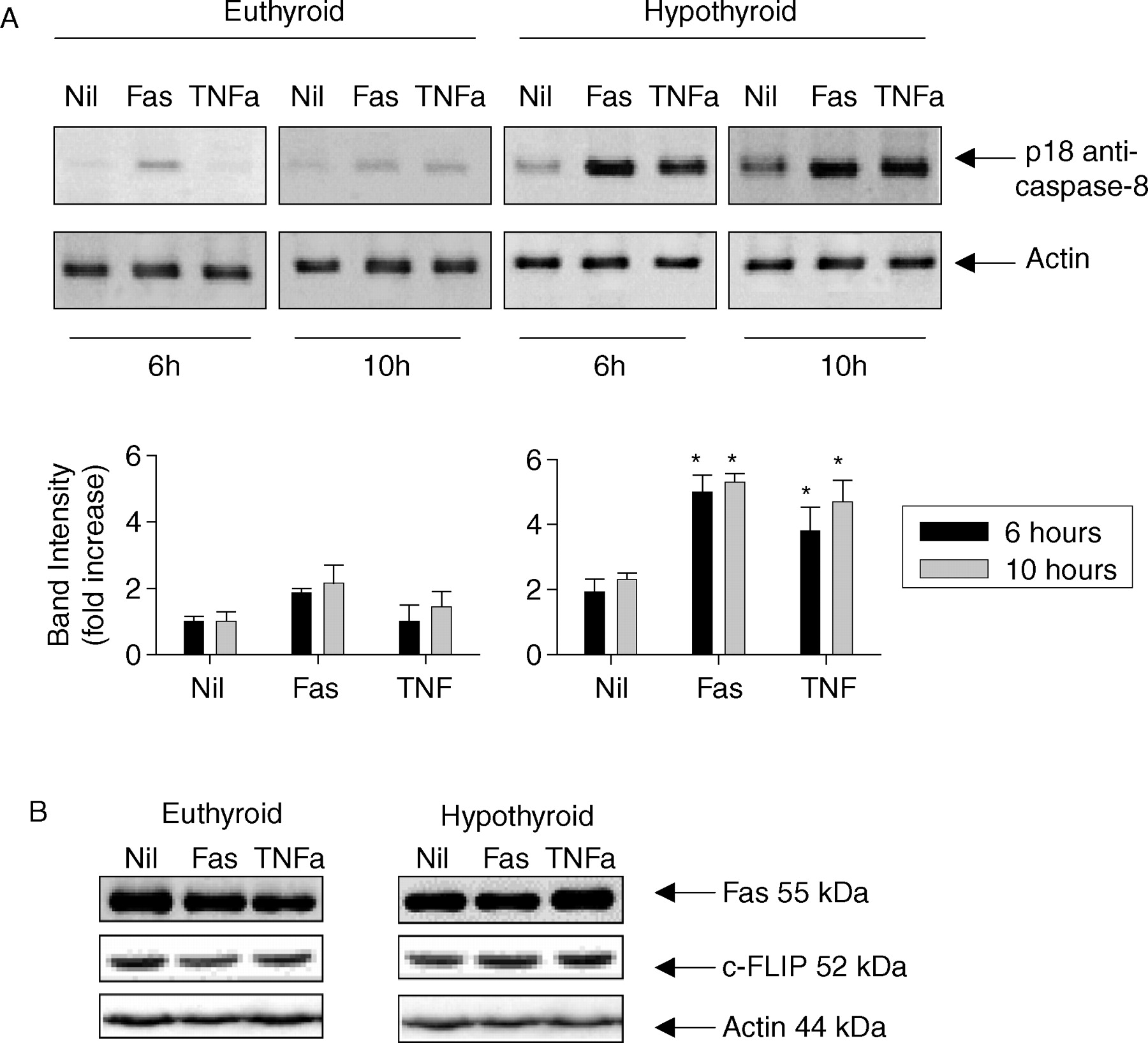