Colocalization of TSP-1 immunoreactivity with CD34 immunoreactivity in the anterior pituitary: effect of estradiol. (A–C) Representative photographs showing colocalization of TSP-1 and CD34 immunoreactivity in the pituitary of an ovariectomized rat with an empty implant for 4 weeks. TSP-1 immunofluorescence staining is shown in red (A) and CD34 is in green (B) and doubled labeled cells are shown in yellow (C). (D and E) Representative photograph showing immunofluorescence staining of TSP-1 and CD34 in anterior pituitaries of ovariectomized rat with an estradiol implant for 2 (D) or 4 weeks (E). Some of the double-labeled cells are shown by arrows. Immunofluorescence staining was absent when the section was stained in the absence of primary antibodies (F). Scale bar is 20 μM.

Estradiol-induced changes in the levels of PRL, TSP-1, and CD31 proteins in the pituitary tissues. Pituitaries of F344 rats that were ovariectomized and treated with an empty implant (Ovx) or estradiol implant (Ovx +E2) for 2 and 4 weeks were used for measurement of PRL (A and B), TSP-1 (C and D), and CD31 (E and F) levels by western blot. Left panels show representative blots. Right panels show the mean±s.e.m. ratios of band intensities of proteins (PRL, TSP-1, and CD31) and actin. Each bar represents mean±s.e.m. of four different animals. *P<0.05 compared with the Ovx group; **P<0.05 compared with the Ovx+E2 treated at 2 weeks groups.

Estradiol-induced changes in TSP-1 protein levels in pituitary endothelial cells in primary cultures. (A) Time-dependent effect of estradiol. Endothelial cells treated with estradiol (E2; 10 nM) for various time periods were lysed and used for detection of TSP-1 and actin levels using western blot. Upper panel in each figure shows representative bands for TSP-1 and lower panels shows the representative bands for actin. The mean±s.e.m. ratios of band intensities of TSP-1 and actin are shown in the histograms. Each bar represents mean±s.e.m. of four separate experiments. *P<0.05 compared with the control group. (B) Concentration-dependent effect of estradiol in the absence and presence of anti-estrogen ICI 182 780. Primary cultures of endothelial cells were pretreated with ICI 182 780 (10−7 M) for an hour followed by estradiol (0.1–10 nM) for 18 h. Levels of TSP-1 and actin were measured using western blot. Representative blots are shown in the upper panel. Data are shown on the lower panel. Each bar represents mean±s.e.m. of 4–5 separate experiments.

Effect of TSP-1 on basal and VEGF-induced proliferation and migration of endothelial cells. (A) Cell proliferation assay. Endothelial cells grown in 96-well plate were treated with TSP-1 (5 μg/ml), VEGF (50 ng/ml), or VEGF and TSP-1 for 24 h. The cultures were treated with 0.5 μCi[methyl-3H]-thymidine per well for 8 h prior to harvesting. Data are presented as percentage of control. Each bar diagram represents mean±s.e.m.; n=5–6. *P<0.01 compared with control group. †P<0.05 compared with VEGF-treated groups without TSP-1. (B) Cell migration assay. Equal numbers of serum-starved cells were plated on the migration tray with filter (8 μm pore size). To the lower chamber, TSP-1 (5 μg/ml) and VEGF (50 ng/ml) were added alone or together. Cell migration in each chamber was determined. The data are presented in relative fluorescent units (RFU). Each bar diagram represents mean±s.e.m.; n=4. *P<0.01 compared with the rest of the groups. 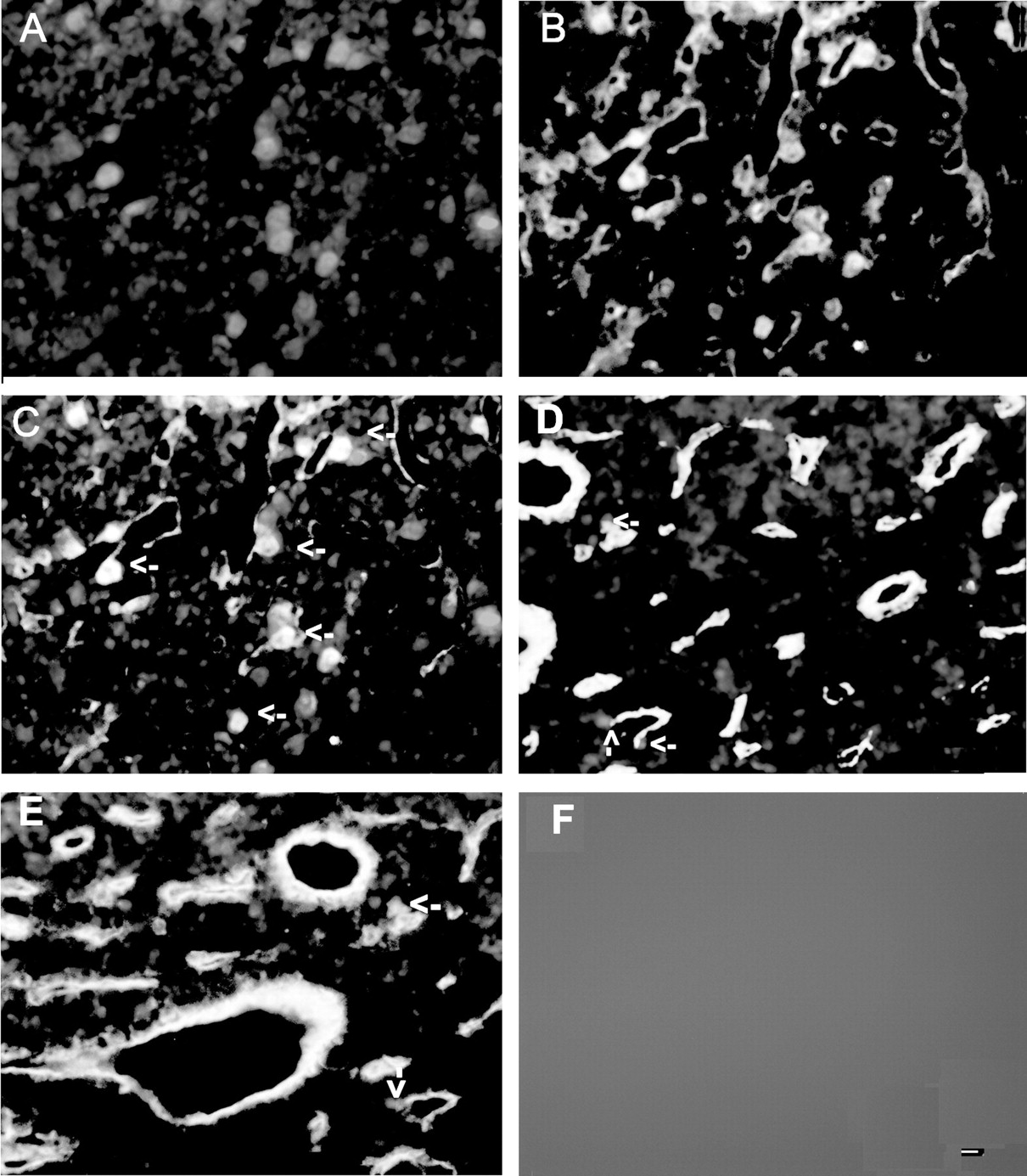 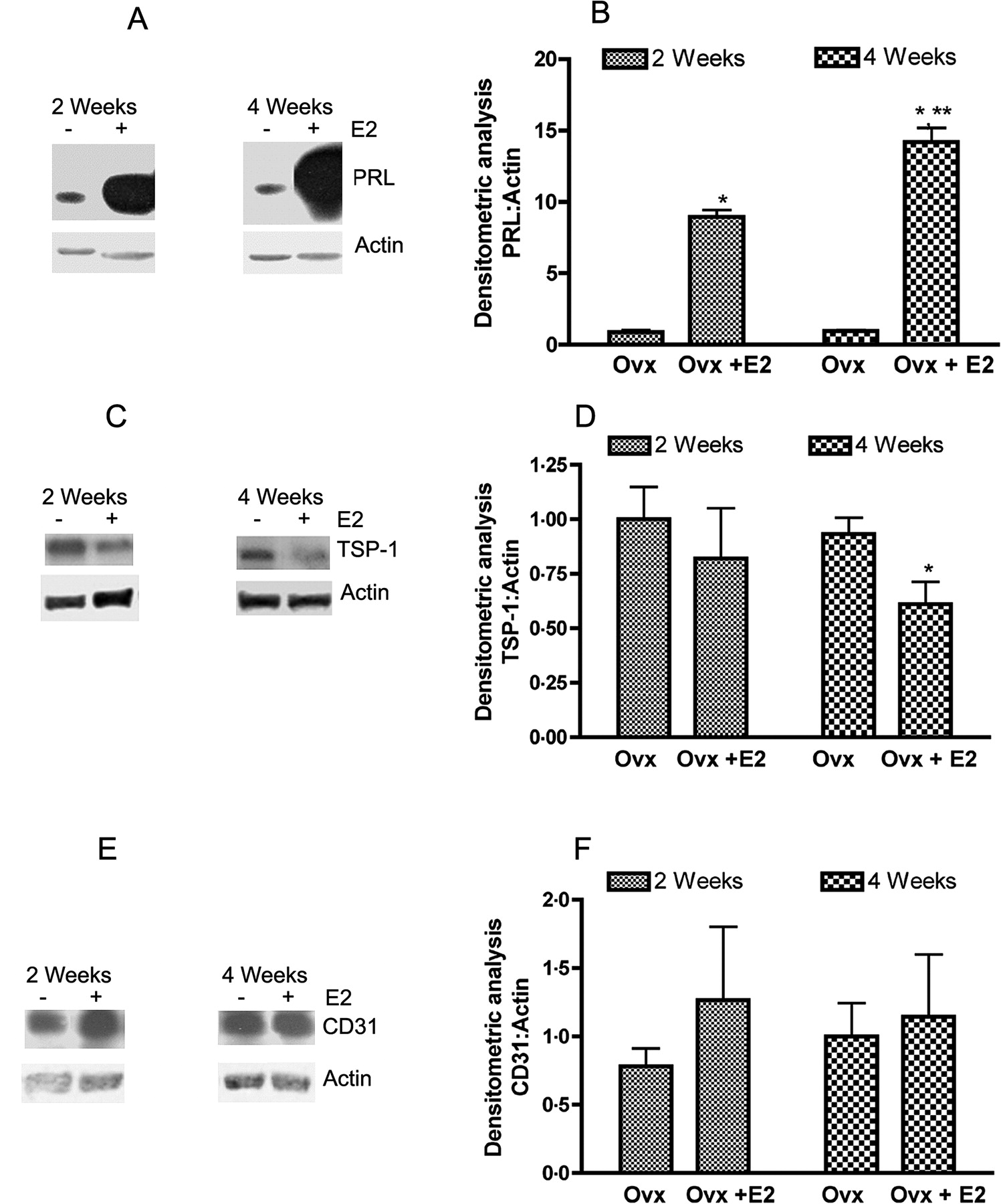 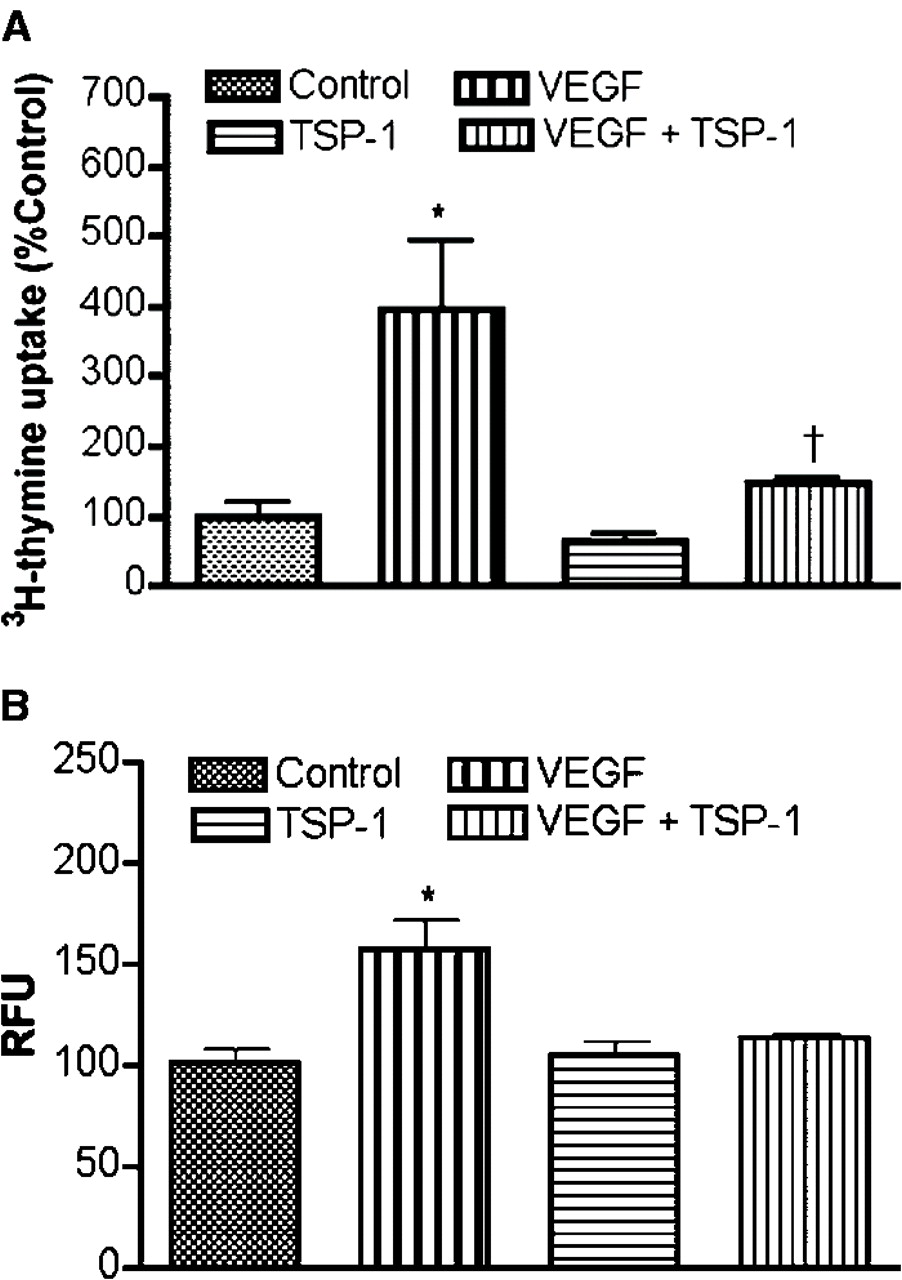