Schematic drawing of the strategy for building the CLEPR full-length cDNA. Black boxes indicate extended primer sequences to include NotI site and a ‘KOZAK’ sequence in the 5′- as well as a stop codon and KpnI site at the 3′-ends of the cDNA. These sequences are indicated in Table 1.

Characterization of the transfected clones. (A) Northern hybridization using the CLEPR-specific probe showing three LEPR positive clones (lanes 1–3), two clones transfected with the reporter construct only (lanes 4 and 5), the parental line (lane 6) and the parental line 72 h after transient transfection with the CLEPR (lane T). (B) Ethidium bromide staining of the gel before blotting indicating the integrity of the RNA. (C) Reporter gene activation following incubation with IFN-α (IFN). No luciferase activation was detected in the parental line that does not contain the reporter gene (fold induction=1). Cells were grown in 24-well plates and incubated in triplicates with 100 IU of IFN-α for 3 h. Luciferase activity was measured using luciferin (Promega) and luminometer (Turner Biosystems). Fold induction was calculated by dividing the signal obtained in the presence and absence of IFN-α. Means of triplicate are shown. Standard error was about 10% in all cases (not shown). 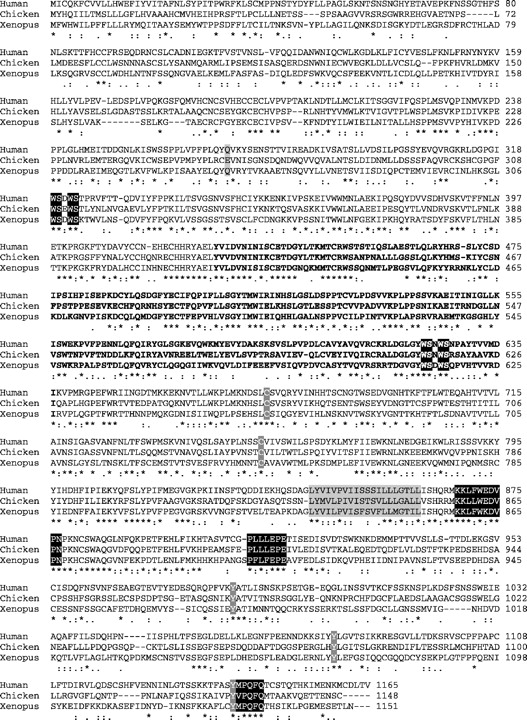 Multiple comparisons of the predicted amino acid sequences of the human, chicken, and Xenopus leptins. Amino acid sequence of the human, chicken, and Xenopus LEPRs (accession numbers: ; ; and respectively) are denoted by the single-letter code. Alignment was performed using the ClastalX program. ‘*’ Indicates residues or nucleotides identical in all sequences in the alignment. ‘:’ Indicates conserved substitutions and ‘.’indicates semi-conserved substitutions. Functional domains, motifs, and critical amino acids found necessary for LEPR activity in mammals are indicated as follows: Box 1, 2, and 3 are indicated by white letters and black background. The Y residues (Y963, Y1077, and Y1138) are indicated by white letters on a gray background. Cysteine residues at positions 672 and 751 of the fibronectin type III domain are indicated by white letters on gray background. The glutamine (Q) at position 269 of the human sequence, implicated in the fatty mutation in rats (transition from glutamine to proline; White et al. 1997b) is denoted by gray background.

Detection of leptin-like activity in serum samples of human, cow, and chickens. Serum samples of the indicated sources were incubated with the CLEPR transfected cells (A) or the human LEPR transfected cells (B) and the control cell line, as described in Fig. 3. The indicated serum samples were diluted tenfold in DMEM enriched with 1 mM CaCl2. The sensitivity of the assay to physiological leptin levels of humans and cows but not to that of chickens is demonstrated. The experiment was done in triplicates; the mean values are of three representative experiments. Vertical lines indicate s.e.m.