Control solvents used were dimethyl sulfoxide (DMSO) and a proprietary FDA-approved cyclodextrin derivative. All experiments were conducted using C10 dissolved in both solvents for comparison of solvent effects. Both solvents produced similar results on all parameters measured.

C10 was prepared as a fresh 200 mM stock solution in 100% (v/v) DMSO, and then diluted into medium at 37 °C to achieve the noted concentrations in individual experiments. Since DMSO itself may have effects on different bioactivities, these studies also used 50 mM C10 dissolved in 40% (v/v) cyclodextrin by sonication at 50 °C for 30 min and mixing on a rotary shaker at 37 °C overnight. Again, C10 was diluted with medium to the noted concentrations in individual experiments. Regardless of the solvent used, C10 was similarly effective in all experiments, and its effects were not duplicated by either solvent.

Palmitate solutions containing 2% FFA-free BSA were prepared fresh in DMEM containing no serum immediately before each experiment. Cells were incubated for the indicated times with 0.75 mM palmitate. A 2% BSA control was included with all palmitate treatments, and in all cases, no BSA effect was observed compared to untreated control.

Of note, and suggesting this basal activity and the C10 effect were potentially relevant to disease expression, we measured the levels of leptin in the supernatants of 3T3L1 adipocytes (Table 1). We observed that measurable leptin levels were present in the supernatants of cultured 3T3L1 adipocytes and that 0.5 mM C10 inhibited leptin production by these cells (Table 1). Although there was a solvent effect, C10 exhibited a much greater inhibitory effect than solvent alone, P<0.001 (Table 1).

C10 does not block insulin-stimulated AKT signaling in 3T3L1 adipocytes

For C10 to be a useful therapeutic agent, it is important that it blocks pathologic insulin resistance without affecting normal insulin signaling. Insulin stimulation leads to the activation of AKT via phosphorylation of multiple residues including serine residue 473 (Brozinick & Birnbaum 1998). Thus, we evaluated the effects of C10 on insulin-stimulated AKT serine 473 phosphorylation in 3T3L1 adipocytes. As can be seen in Fig. 2, C10 did not block insulin-stimulated AKT serine 473 phosphorylation in 3T3L1 adipocytes (Fig. 2).

Excess saturated FFAs such as palmitate can reduce insulin sensitivity and glucose uptake. Some of the ways FFAs mediate insulin resistance are by up-regulating IL6 and iNos and by the activation of the NF-κB and TLR4 signaling pathways (Lin et al. 2000, Wellen & Hotamisligil 2003, Ajuwon & Spurlock 2005, Boden et al. 2005, Jove et al. 2005, Shi et al. 2006, Nakamura et al. 2009, Ragheb et al. 2009). First, 3T3L1 adipocytes were treated with palmitate with or without C10 or control solvent for 24 h, and IL6 protein levels were measured. We observed a significant (P<0.01) increase in IL6 production following treatment with palmitate (Fig. 3A). Both C10 and control solvent exhibited an ability to significantly decrease palmitate-induced IL6 (P<0.01); however, it was clear in all experiments that C10 was much more potent at inhibiting palmitate-induced IL6 production than control solvent (Fig. 3A).

Next, we evaluated the effects of C10 on palmitate-induced iNos expression. 3T3L1 adipocytes were treated with palmitate plus or minus C10 for 24 h, and iNos expression was evaluated via RT-PCR. Clearly, iNos was induced by palmitate, and C10 inhibited palmitate induction of iNos in these cells (Fig. 3B).

Adipose-associated macrophages are also thought to play an important role in the pathogenesis of insulin resistance and T2DM (Weisberg et al. 2003, Xu et al. 2003, Curat et al. 2006). We questioned whether palmitate would increase IL6 and iNos in macrophages similar to that observed in 3T3L1 adipocytes, and whether such induction would be inhibited by C10.

Murine macrophage RAW 264.7 cells were incubated with palmitate in the absence or presence of C10, and IL6 protein levels were measured using an IL6-specific ELISA. Palmitate significantly increased IL6 protein levels, whereas C10 inhibited this induction (Fig. 4A). Additionally, we evaluated the effects of C10 on palmitate induction of iNos RNA expression via RT-PCR. Palmitate significantly increased iNos RNA levels, and this was inhibited by C10 (Fig. 4B).

Next, we questioned whether C10 had similar effects on LPS induction of other inflammatory molecules in RAW 264.7 macrophages. First, we evaluated the effects of C10 on LPS-induced iNos gene expression using RT-PCR. C10 largely reduced LPS induction of iNos (Fig. 6B). Next, we evaluated the effects of C10 on LPS induction of IL6 using ELISA. LPS greatly induced the production of IL6, and C10 significantly blocked this induction (Fig. 6C). Finally, to confirm these results, RAW 264.7 cells were treated with LPS, and northern blot analyses were conducted to evaluate the expression of Ifn-β, Il1β, Cxcl10, and Il6 over a 6 h time course. After 1 h of LPS treatment, Ifn-β, Il1β, and Cxcl10 were largely up-regulated (Fig. 6D). Il6 up-regulation by LPS was evident after 3 h (Fig. 6D). C10 inhibited LPS induction of all of the genes evaluated (Ifn-β, Il1β, Cxcl10, and Il6) (Fig. 6D).

Here, we confirm that the saturated FFA palmitate is a strong inducer of the inflammatory cytokine pathways known to mediate insulin resistance in 3T3L1 adipocytes, and that palmitate is also a strong inducer of inflammatory pathways that produce cytokines/molecules that mediate insulin resistance in RAW 264.7 macrophages as well. Specifically, we show that palmitate can induce significant increases in IL6 and iNos production in both cell types. In 3T3L1 adipocytes, palmitate-induced IL6 production resulted in Socs-3 up-regulation, providing additional evidence to suggest that FFAs are important in the development of insulin resistance since SOCS-3 inhibits tyrosine phosphorylation of IRS-1 and IRS-2 (Ueki et al. 2004). The observed palmitate-induced up-regulation of iNos lends even more support to the importance of FFAs in the development of insulin resistance since up-regulation of iNos has been shown to contribute to inflammation-induced insulin resistance (Perreault & Marette 2001). Most importantly, we report the novel finding that C10 is effective at blocking palmitate and LPS-induced activation of IL6 and iNos-producing inflammatory pathways in both 3T3L1 adipocytes and RAW 264.7 macrophages without blocking insulin-stimulated AKT signaling, suggesting that C10 may be efficacious as a novel therapeutic agent for the treatment of obesity/inflammation-induced insulin resistance. Furthermore, since C10 inhibits LPS and palmitate induction of iNos expression in both adipocytes and macrophages, it might also be beneficial in correcting the stress-induced hyperglycemia observed in acute inflammatory processes such as infection/sepsis (Berstein 2005, De Souza et al. 2005, Elsammak et al. 2005). It is clear, however, that additional studies into the effects of C10 on FFA-induced insulin resistance (i.e. glucose uptake assays, etc.) in adipocytes and other insulin target tissues such as skeletal muscle and liver are warranted before clinical efficacy can be established.

Given that C10 effectively reduced basal levels of IL6, Socs-3, and leptin in addition to palmitate-induced IL6, Socs-3, iNos, and IRS-1 serine 307 levels in 3T3L1 adipocytes, we observed no effect of C10 on basal IRS-1 serine 307 levels via western blot analysis. Perhaps the levels of palmitate secreted from 3T3L1 adipocytes in culture are insufficient to elicit a measurable change in IRS-1 serine 307 phosphorylation with C10 treatment that is detectable by conventional western blotting. We encountered a similar situation when measuring basal levels of IL6 as well; concentration of cell culture media was necessary prior to ELISA measurement, as basal IL6 levels in cell culture media were too low to detect without centricon concentration of media prior to ELISA as described in Materials and Methods.

Recently, the ‘abnormal’ expression of TLR in non-immune cells and their resultant overexpression of the same immunomodulatory molecules such as IL6 and TNF-α which are known to be important in the onset/progression of T2DM, have been recognized (Lin et al. 2000). TLR4 has been reported in 3T3L1 adipocytes (Lin et al. 2000), and LPS as well as FFA treatment results in the activation of TLR4 and consequent IL6 and TNF-α production, which is not observed in Tlr4 knockdown adipocytes (Lin et al. 2000); directly linking Tlr4 expression in adipocytes and insulin resistance. We have previously shown that C10 can block TLR3-mediated expression and signaling in multiple tissues (Harii et al. 2005, McCall et al. 2007, Schwartz et al. 2009). In this study, we also demonstrate that C10 can block LPS and palmitate-mediated NF-κB and IFN-β activation as well as LPS-induced iNos, Ifn-β, Il1β, Cxcl10, and Il6 gene expression, and IL6 protein production. Since these are all downstream products of both TLR3 and TLR4 signaling, it suggests that C10 may prevent palmitate-mediated up-regulation of IL6 and iNos in 3T3L1 adipocytes and RAW 264.7 macrophages, at least in part, by blocking palmitate-mediated TLR signaling. Although these data are suggestive of TLR specificity, additional studies need to be conducted to identify if this activity of C10 is specific to palmitate activation of TLR4 signaling or if C10 may be affecting other pathways that up-regulate IL6 and iNos.

This work was supported, in part, by the Interthyr Corporation and Ohio University.

C10 does not block insulin-stimulated AKT signaling in 3T3L1 adipocytes. 3T3L1 adipocytes were treated with palmitate (0.75 mM) alone or in combination with C10 (0.5 mM) or control solvent (0.25% (v/v)) for 24 h followed by stimulation with 100 nM insulin for 10 min as indicated. Total cell lysates were then prepared and directly subjected to SDS-PAGE and western blotting. AKT serine 473 phosphorylation was identified using an anti-phospho-AKT serine 473-specific antibody. Images shown are representative immunoblots from ≥3 independent experiments.

C10 inhibits palmitate-induced IL6 and iNos in RAW 264.7 macrophages. RAW 264.7 macrophages were treated with 0.75 mM palmitate alone or in combination with 0.25% (v/v) control solvent or 0.5 mM C10 for 24 h. (A) Supernatant levels of IL6 were then measured using a mouse IL6-specific ELISA. Significance was determined using one-way ANOVA followed by Bonferroni's post hoc analysis. *P<0.0000001 between groups as indicated. (B) Total RNA was isolated, and RT-PCR was then performed to evaluate iNos expression. Fifty nanograms of cDNA were used as a template for PCR. Images shown are representative images from ≥3 independent experiments.

C10 inhibits palmitate-induced Socs-3 expression in 3T3L1 adipocytes. 3T3L1 adipocytes were treated with palmitate (0.75 mM) alone or in combination with C10 (0.5 mM) or control solvent (0.25% (v/v)) for 24 h. Total RNA was isolated, cDNA was synthesized, and Socs-3 and Gapdh were amplified by RT-PCR as described in Materials and Methods. Images shown are representative images from ≥3 independent experiments. 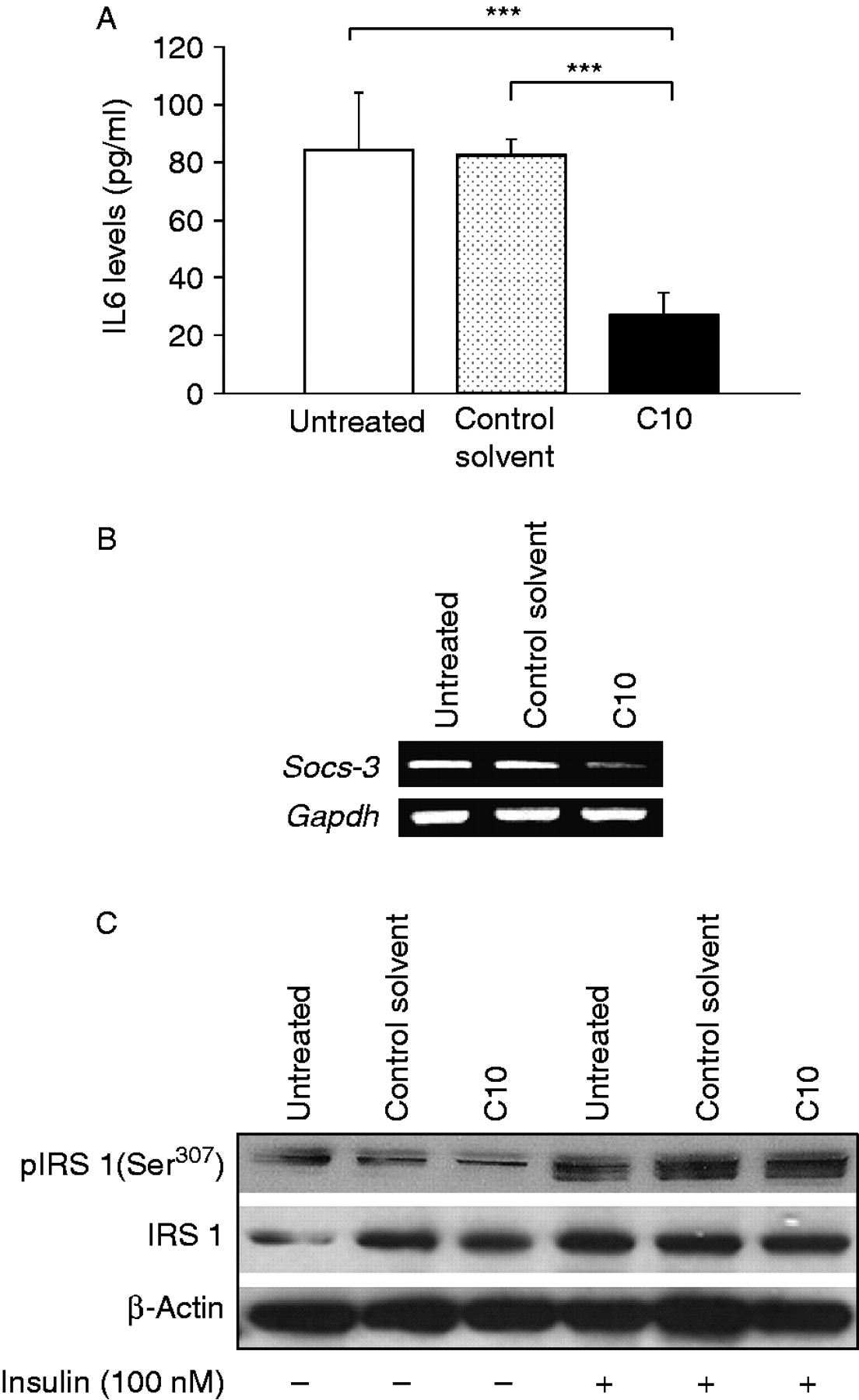 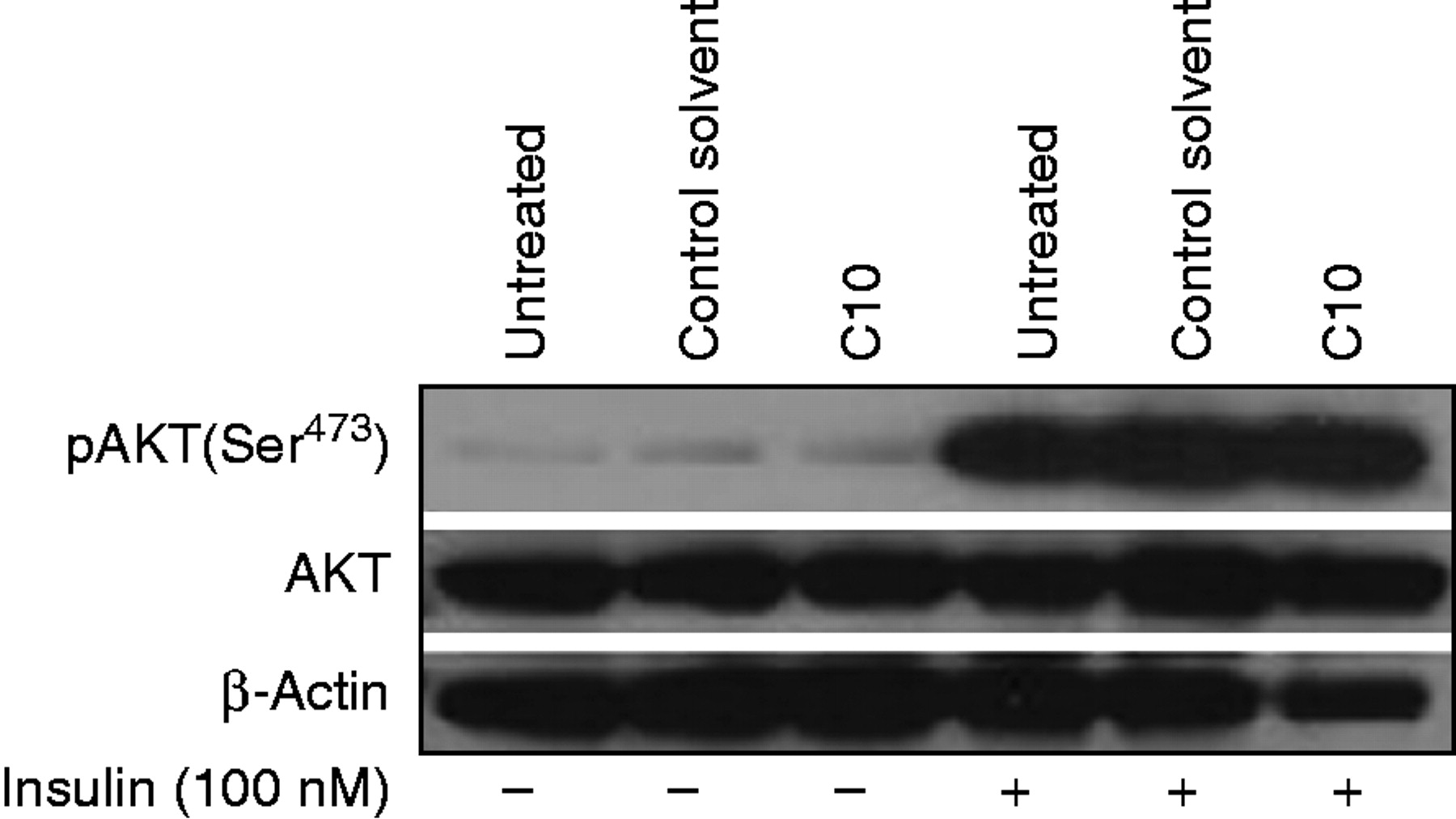 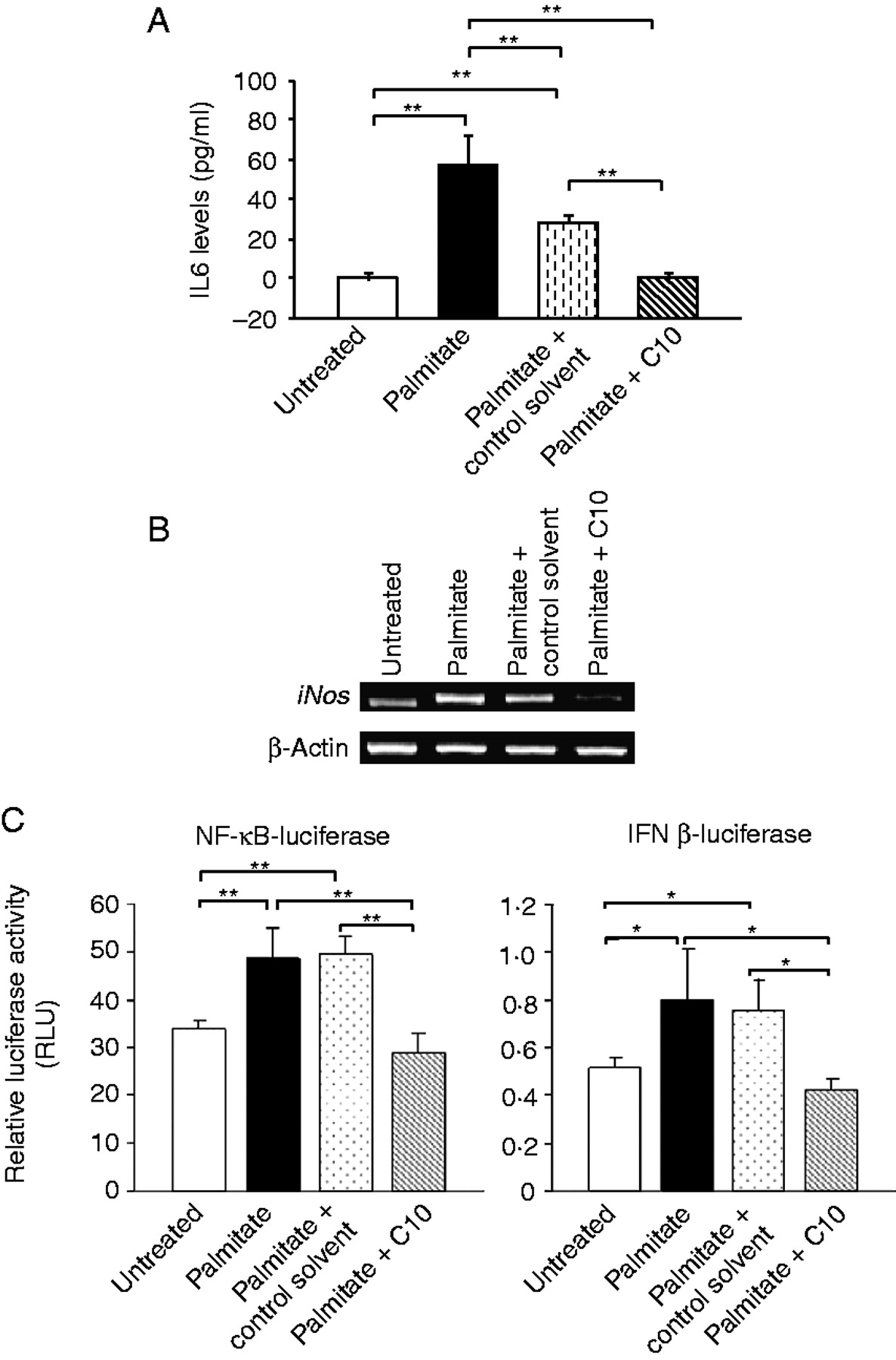 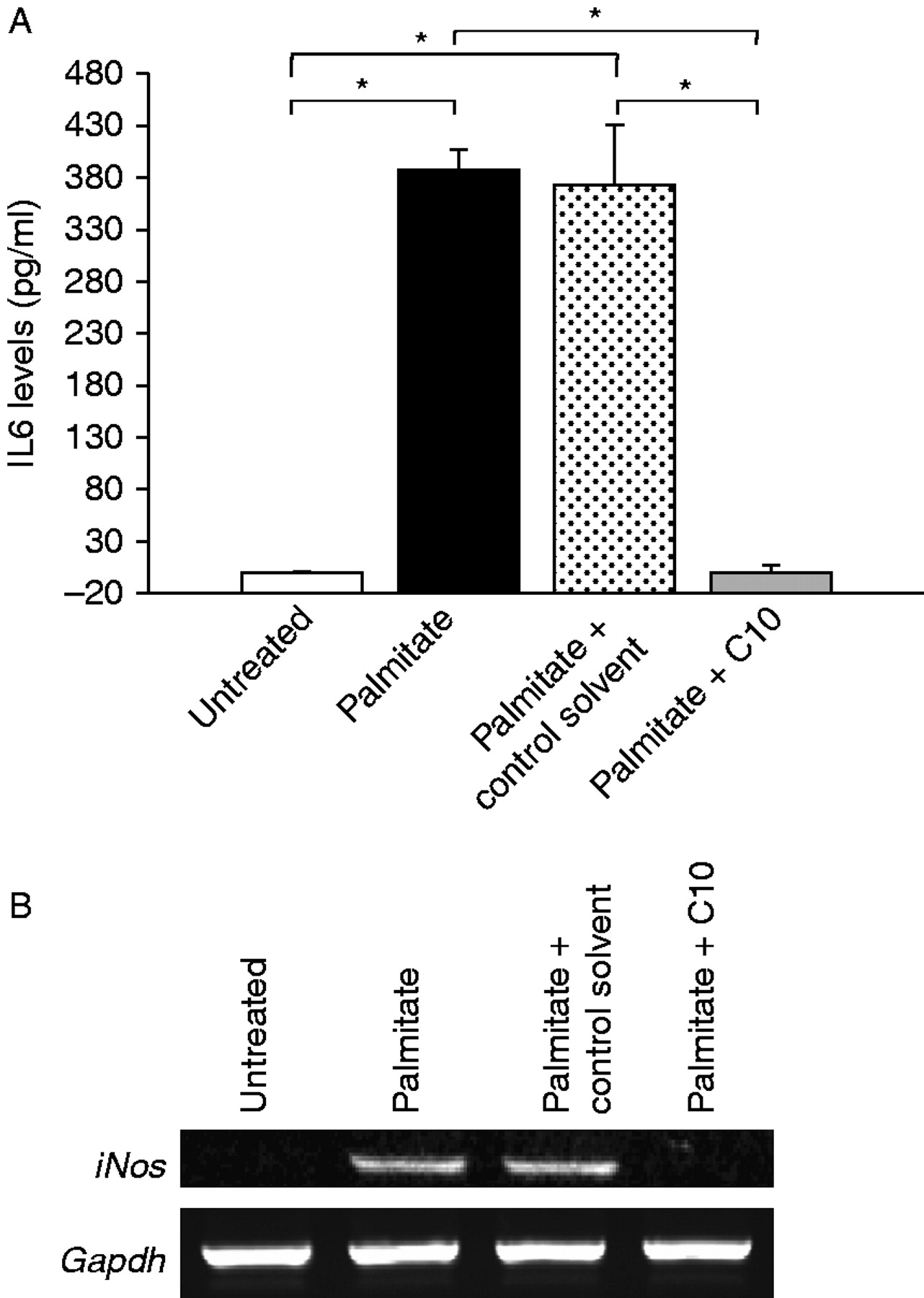 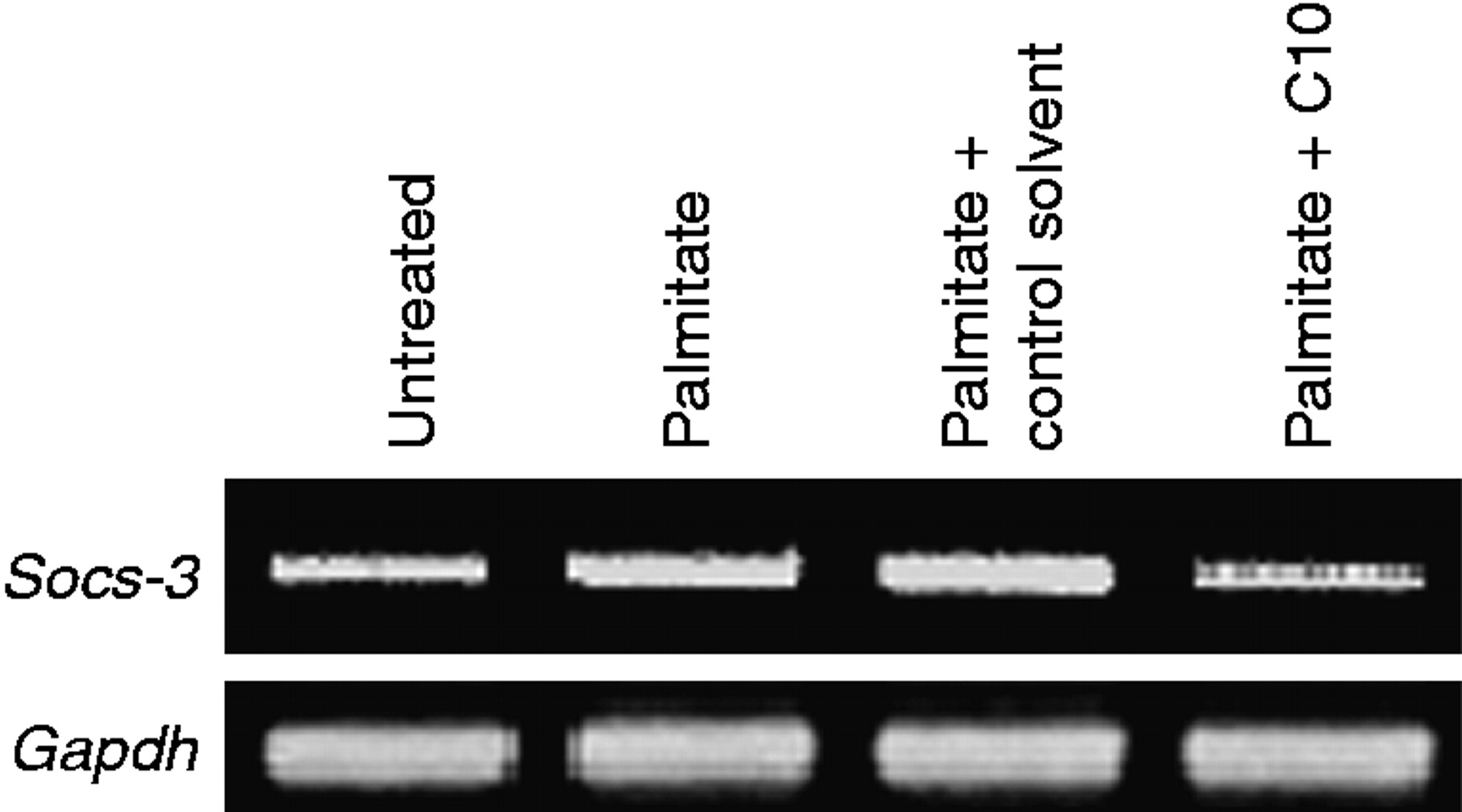 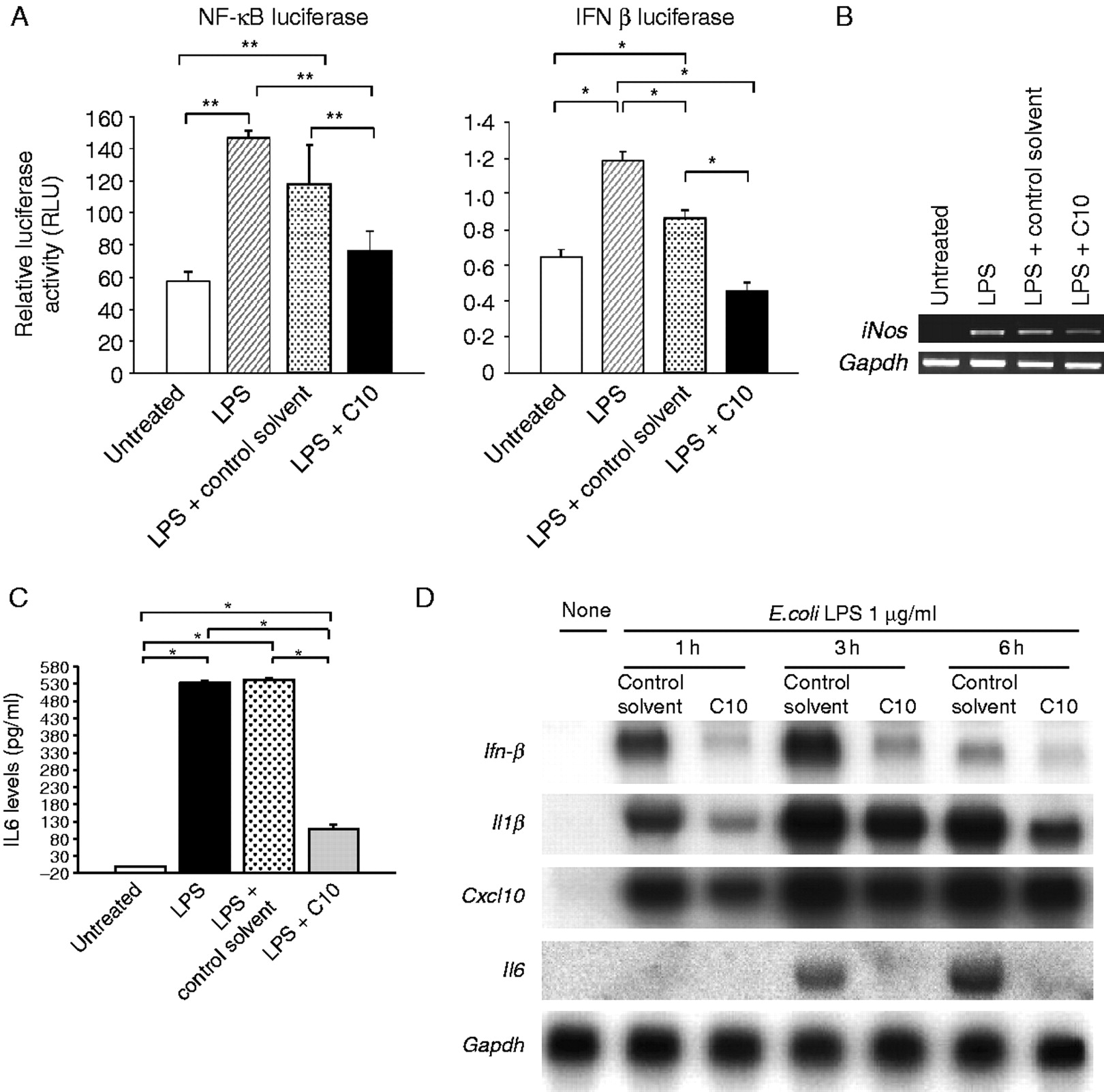 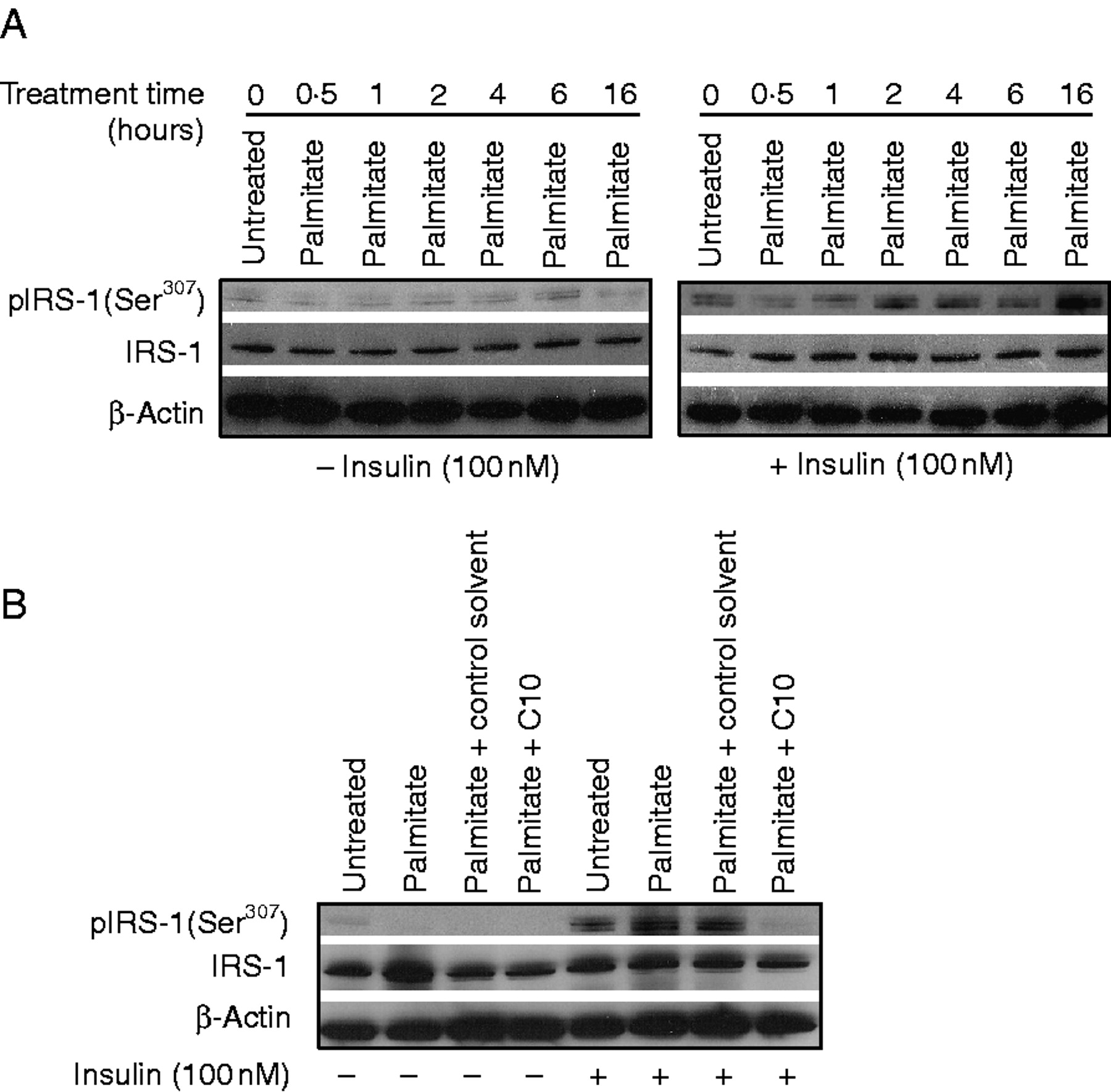 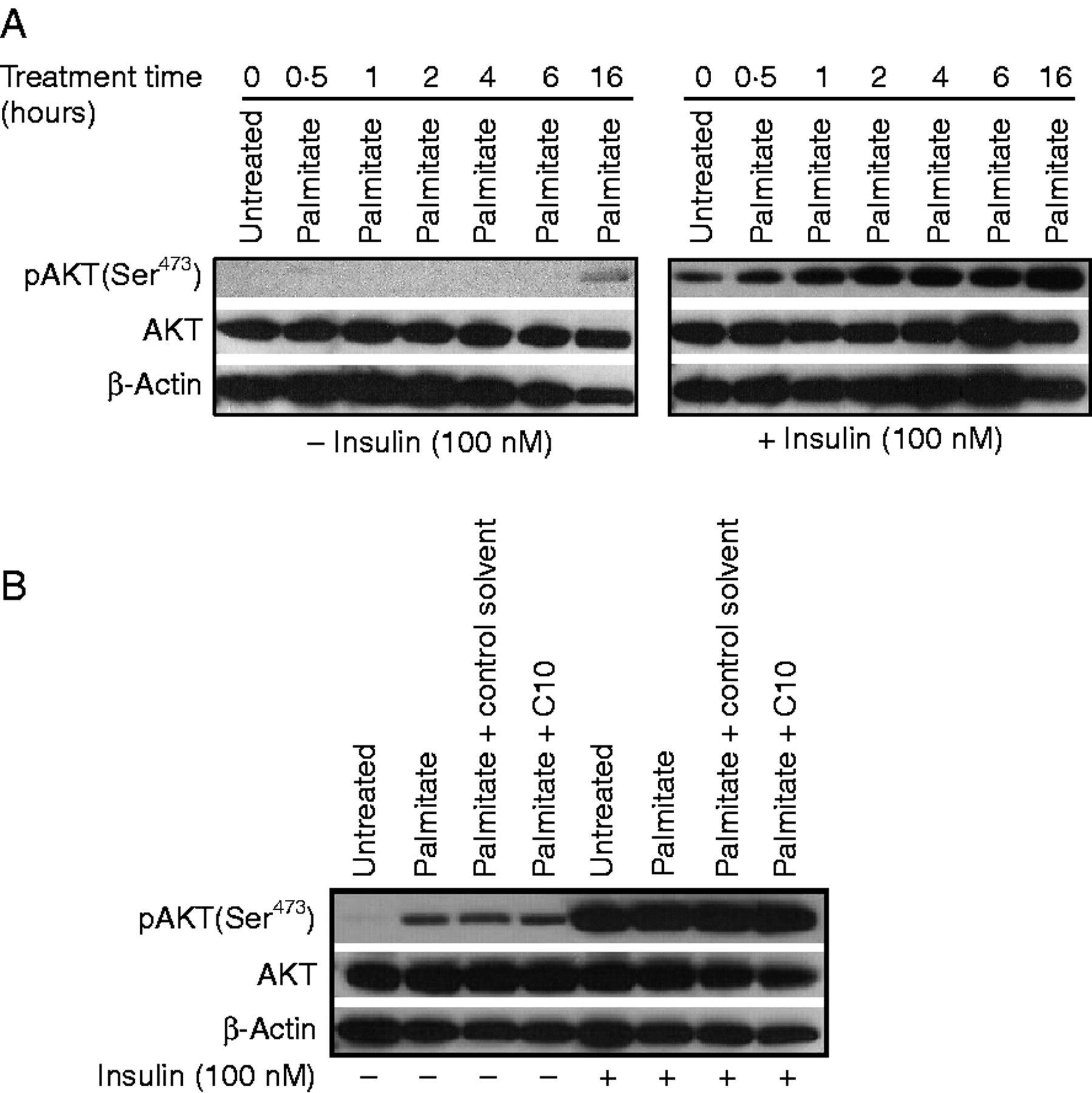