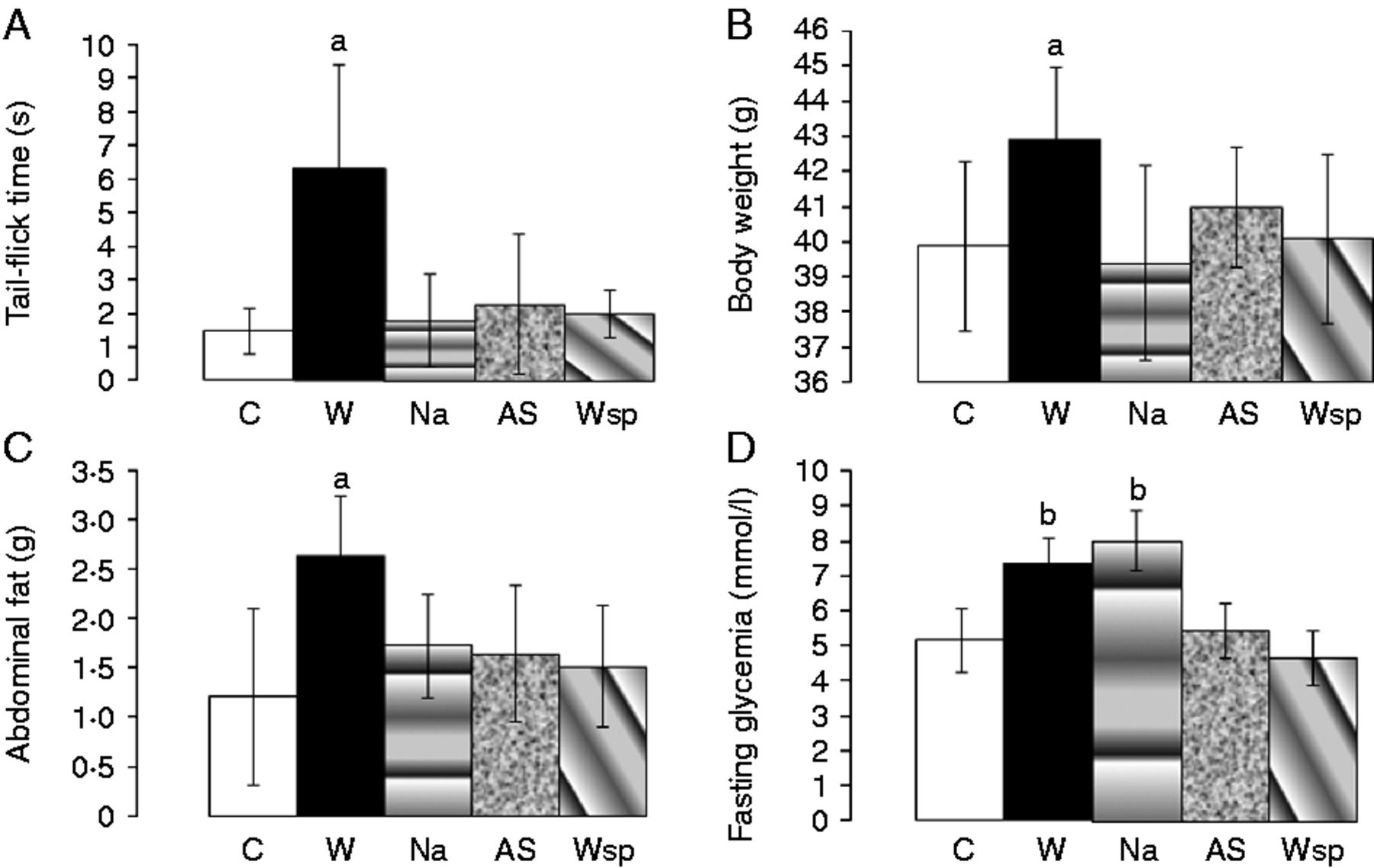 Behavioral and metabolic parameters in the five groups of mice. Nociceptive threshold at 30 days of age (A). Body weight (B), abdominal overweight (epididymal fat pads (C)) and fasting glycemia (D) at 90 days of age. Values are mean±s.d. Twelve animals per group for tail-flick, body weight, and fat pads weight; 24 animals per group for glycemia. In (A) a post-hoc test shows aP<0.001 W-mice vs controls. There is also a difference P<0.001 for W-mice vs other groups. In (B) aP<0.01 for W-mice vs controls. Na prevents completely stress-induced overweight (P<0.01), whereas the preventive effect induced by AS is partial (for W-mice vs AS-mice P<0.06). In (C) values of W-mice are consistently greater vs controls (P<0.001). Both Na and AS treatments prevent abdominal overweight (P<0.01). In (D) glycemia values of W-mice are consistently greater vs controls. AS treatment completely prevents stress-induced hyperglycemia (post-hoc test: bP<0.001, W-mice vs AS-mice), whereas Na treatment has no effect (bP<0.001 of Na-mice vs controls. C is for controls; W is for stressed group; Na is for stressed plus naloxone-treated; AS is for stressed plus antisense-treated; and Wsp is for maternal separated-not injected group. Note that naloxone treatment prevents enhancement of pain threshold, body overweight, and abdominal overweight, but it is not able to prevent stress-induced hyperglycemia in adults, whereas hyperglycemia is prevented by AS. Therefore, we can hypothesize that hyperglycemia is an ACTH–corticosterone-bound sign in our diabetes model. Conversely, naloxone treatment is more effective than AS for the prevention of stress-induced overweight, therefore increase of body weight may appear as a prevalent opioid-dependent parameter (Part of data was taken from Loizzo et al. (2010a)). 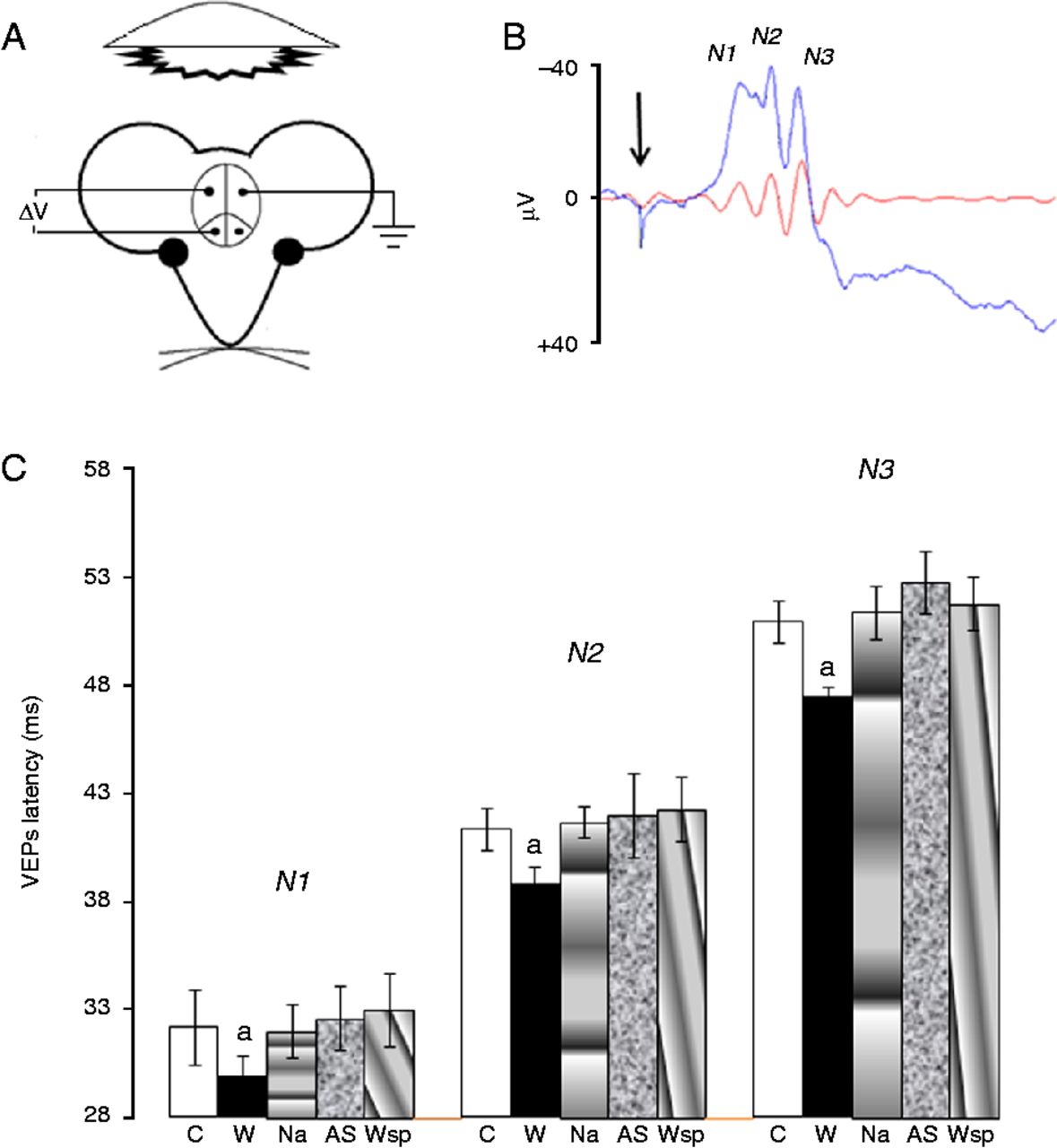 Flash-visual evoked potentials in the five groups of mice. Six mice per group. (A) Schematic drawing of the flashing lamp (upper part of figure) and the mouse head, with recording electrode positions (lower part, left) and ground electrode (lower part, right). (B) Sample of visual evoked potential with the three peaks N1, N2, and N3 in blue color, with rapid oscillatory potentials in red. The arrow indicates flash. Abscissa: latency in millisecond. Ordinate: amplitude in microvolt. (C) Latency of negative (upward) peaks in milliseconds, mean±s.d. in the groups of mice. Values of W-mice are consistently faster (lower) vs controls (post-hoc test: aP<0.025). Both Na and AS treatments prevent effectively this effect (post-hoc test: at least P<0.05). Groups are: C is for control group; W is for stressed group; Na is for stressed plus naloxone-treated; AS is for stressed plus antisense-treated; and Wsp is for maternal deprived-not injected group. We underline that the N1 peak in W-mice is recorded at a mean of 2.3 ms before the N1 peak in C mice, N2 peak 2.5 ms, and N3 peak 3.5 ms before C mice, i.e. the time lag between the flash and N1–N3 peaks is 7–9% faster in W-mice vs controls. Further experiments (not described in detail) suggest possible involvement of the endogenous cholinergic-sensitive system (perhaps retina cells): treatment with physostigmine (0.05 mg/kg i.p.) induced somehow greater speed of N1 recording in C mice vs pre-drug (mean time 30.9 ms in treated vs 32.2 ms in controls, difference not significant), but no modifications were induced in N1 latency in the other groups (see Supplementary material, Table 1, see section on supplementary data given at the end of this article). Moreover, EEG analysis performed in the domain of frequency also indicated that stressed mice showed enhanced total power of the spectrum and enhanced power of very high frequencies (90–400 Hz band) during the active wakefulness condition in W-mice vs controls (see Supplementary material, Table 2). These preliminary data suggest that increases in the total power of the spectrum and in the power of very high-frequency bands is produced in stressed mice over control also in steady-state conditions, and not only after visual system (flash) stimulations. Full colour version of this figure available via http://dx.doi.org/10.1530/JOE-12-0369. 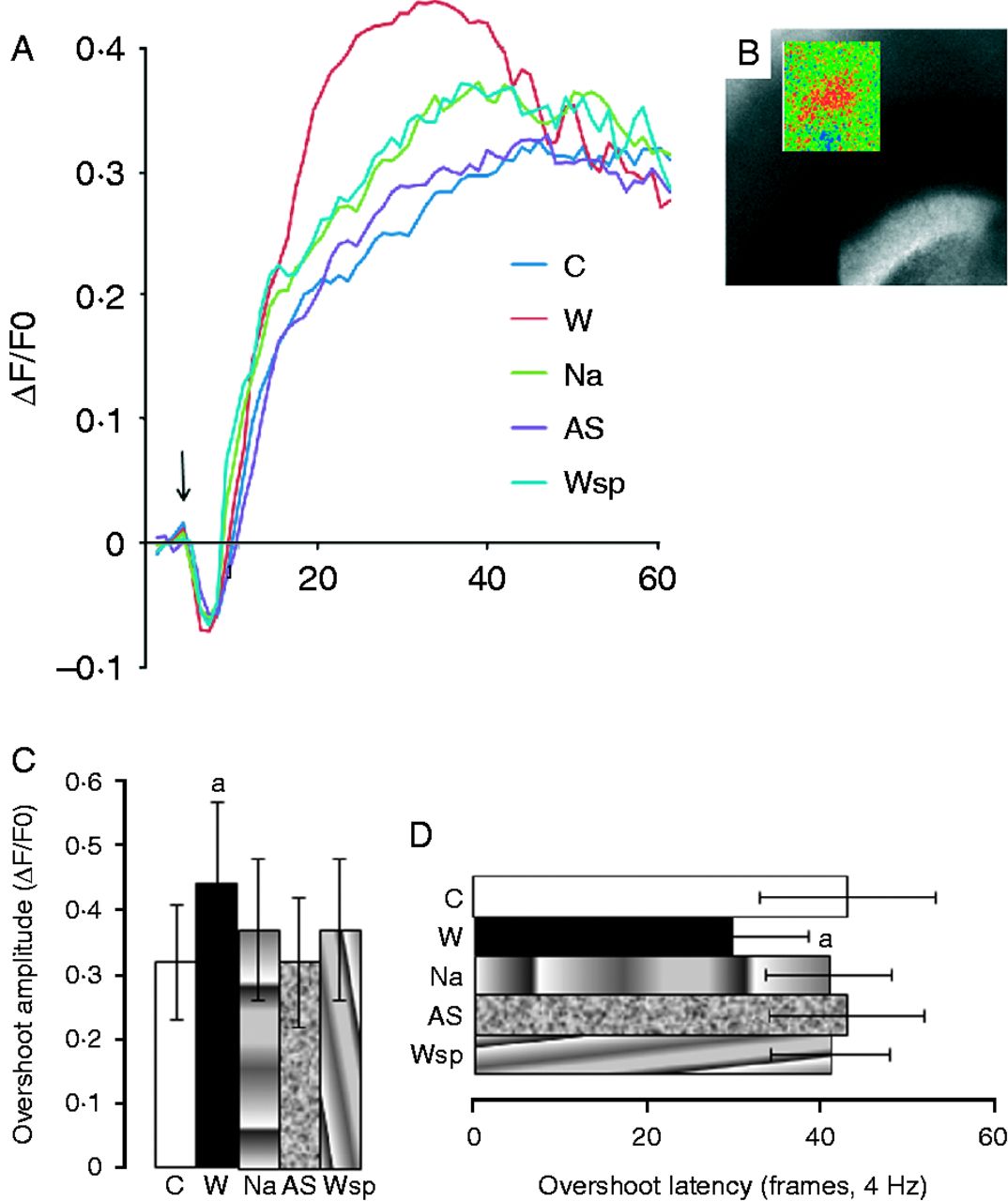 Biphasic fluorescence transients recorded in the five groups of mice. (A) Six mice per group, three slices per mouse, mean of three recordings per slice. Abscissa: number of frames (4 Hz); ordinate: fluorescence level expressed as ΔF/F0. Groups are: C is for control group; W is for stressed group; Na is for stressed plus naloxone-treated; AS is for stressed plus antisense-treated; and Wsp is for maternal separated-not injected group. (B) Sample of electrode position on the visual cortex slice. Data are gathered over a 2500 μm2 circle surface tangent to the stimulus electrode and expressed as pseudo-color tones. (C) Overshoot amplitude, n=18 per group. Amplitude is expressed as ΔF/F0, mean±s.d., and is measured as mean value of three consecutive sampling points in the plateau region of the curve. A post-hoc test showed W-mice values consistently above controls (aP<0.01 vs C-mice). AS treatment completely prevented stress-induced enhancement of overshoot vs W-mice (P<0.01), whereas Na treatment did not induce consistent effects (P=NS). (D) Overshoot latency (frames). n=18 per group. Latency is measured as in (C), is expressed as number of frames, mean±s.d. (the u.v. light is administered with a frequency of four frames per second). A post-hoc test showed aP<0.001, W-mice vs controls. Both Na and AS treatments were able to prevent the effect induced by stress: post-hoc test showed consistent differences vs W-mice (P<0.001). We underline that our neuro-metabolic findings indicate that the mitochondrial complex I activity in the visual cortex is unaffected, since the discharge part of the curve (drop) is analogous in all five groups (A). Therefore, we suggest that increase of both speed and amount of synthesis of mitochondrial NADH shown by the overshoot part of the curve in W-mice is addressed to an homeostatic physiological mechanism aimed at maintaining a stable complex I activity. A similar mechanism was also suggested to take place in the motor cortex of mice at an early stage of lateral amyotrophic sclerosis transgenic model (Loizzo et al. 2010b). 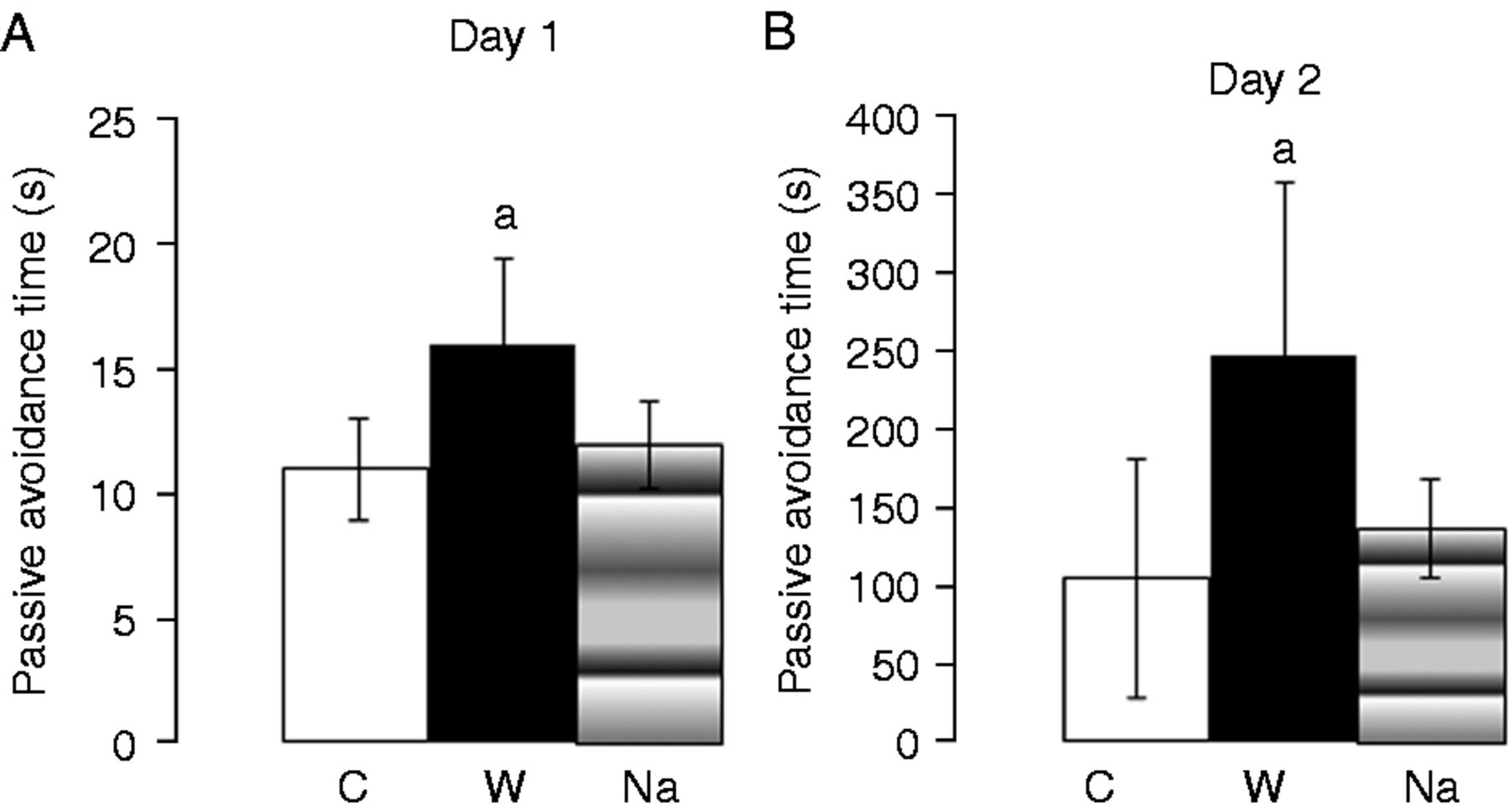 Passive avoidance test. Latency time in seconds, mean±s.d.; 12 mice per group. (A) Day 1. (B) Day 2. A post-hoc test shows aP<0.01, W-mice vs controls. Na treatment prevents the stress-induced effect (P<0.01). Groups are: C is for control group; W is for stressed group; and Na is for stressed and naloxone-treated. Part of the data was published elsewhere (Loizzo et al. 2012). 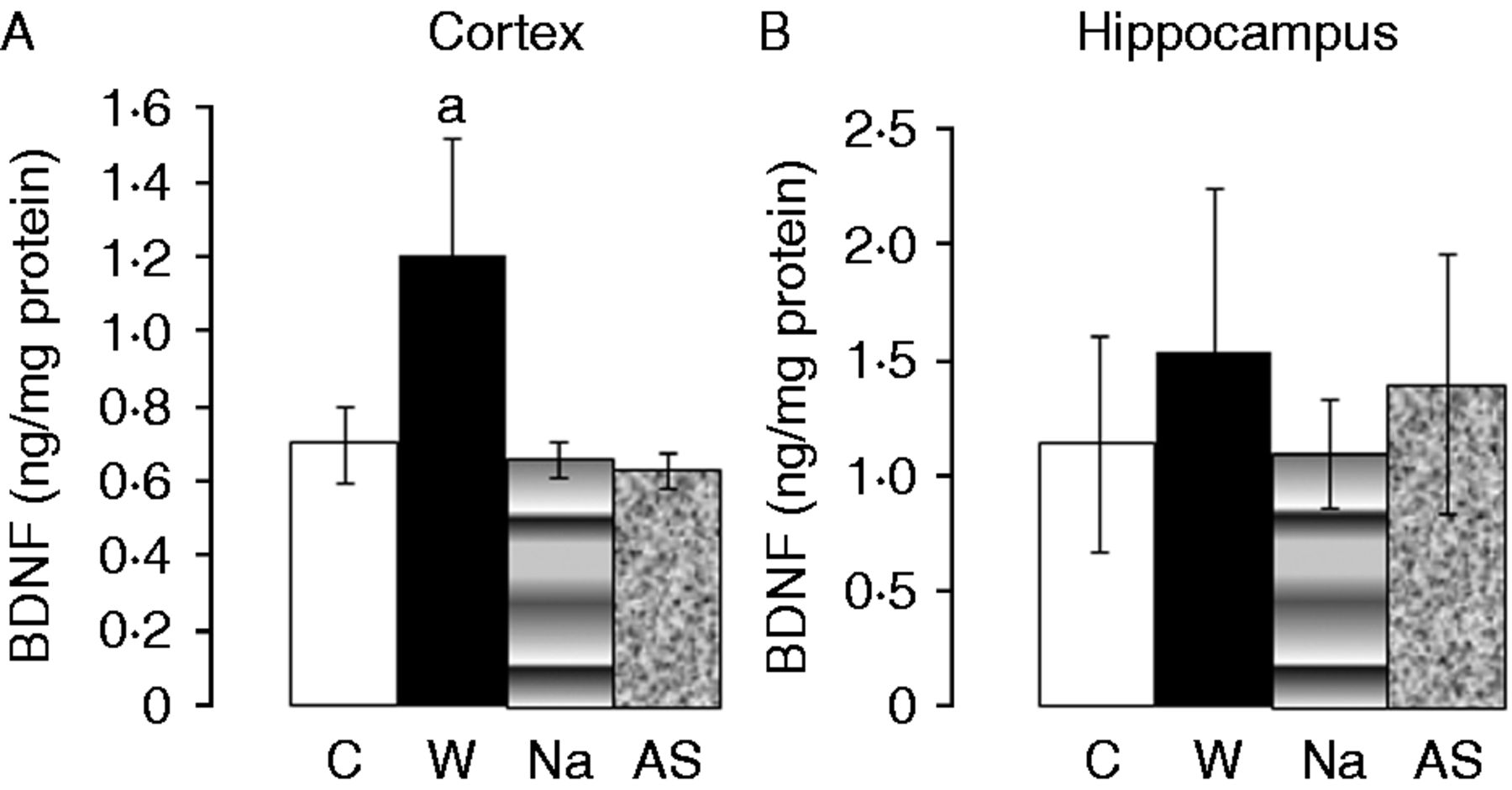 BDNF (ng/mg protein), mean±s.d. Twelve mice per group. (A) BDNF level in the cortex: A post-hoc test shows aP<0.01, W-mice vs controls. Both Na and AS treatments prevent the stress-induced effects (P<0.01). (B) BDNF levels in the hippocampus. No consistent differences are found among W-mice and other groups. Groups are: C is for control group; W is for stressed group; Na is for stressed plus naloxone-treated; and AS is for stressed plus antisense-treated.