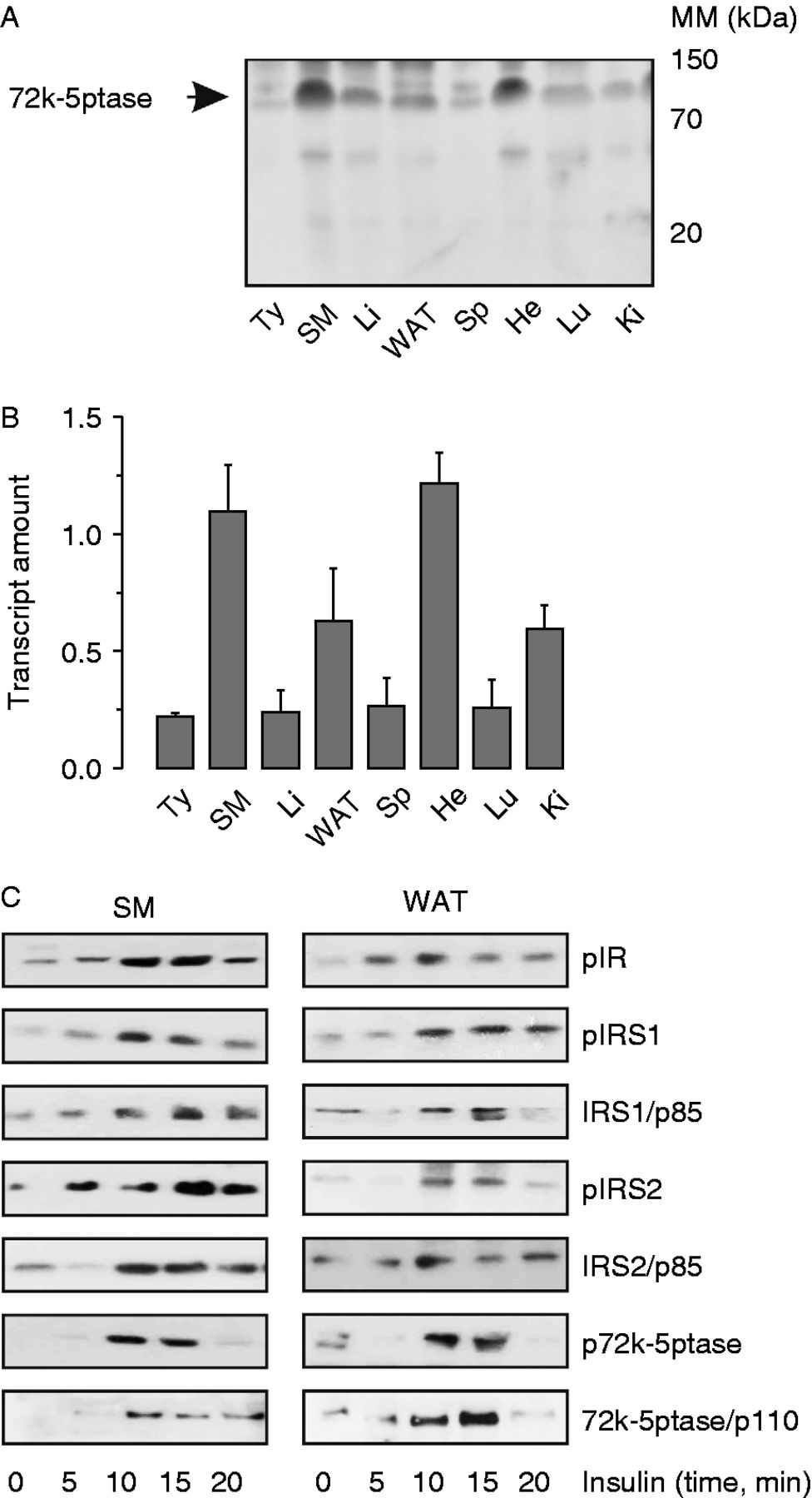 Tissue expression and insulin-induced phosphorylation of 72k-5ptase. One hundred and fifty micrograms of total protein extracts, obtained from thymus (Ty), skeletal muscle (SM), liver (Li), white adipose tissue (WAT), spleen (Sp), cardiac muscle (He), lung (Lu), and kidney (Ki), from 8-week old male Wistar rats were separated by SDS–PAGE, transferred to nitrocellulose membranes and blotted with anti-72k-5ptase antibody. The specific bands are indicated by the arrow in the left-hand margin of the panel (A). Total RNA obtained from Ty, SM, Li, WAT, Sp, He, Lu, and Ki from 8-week old male Wistar rats were reverse transcribed into cDNA and employed in real-time PCRs to determine the transcript amount of the 72k-5ptase (B). In C, 8-week old male Wistar rats were anesthetized and acutely treated with a single i.v. dose of insulin (200 μl, 10−6 M). Specimens of SM and WAT were obtained at different times after insulin injection, as depicted in the panels. Tyrosine phosphorylation of the insulin receptor (pIR), insulin receptor substrates 1 and 2 (pIRS1/pIRS2) and 72k-5ptase (p72k-5ptase), and the associations of IRS1/IRS2 with the p85 subunit of PI3K and 72k-5ptase with the p110 subunit of PI3K were evaluated by immunoprecipitation and/or immunoblotting. In all experiments, n=5. 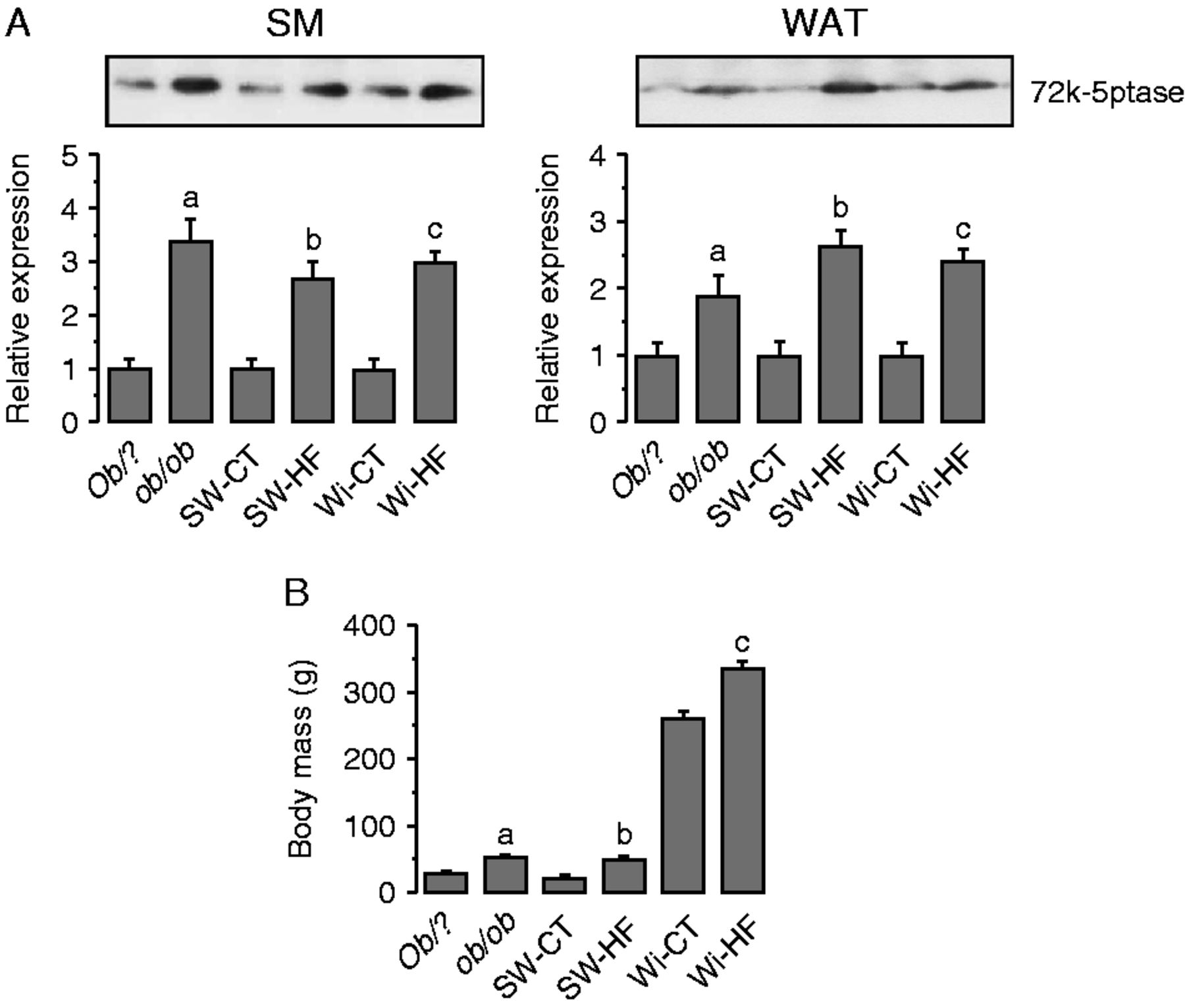 Expression of 72k-5ptase in experimental models of obesity. The expression of 72k-5ptase was evaluated by immunoblot in skeletal muscle (SM) and white adipose tissue (WAT) of 16-week lean (Ob/?) and obese ob/ob mice and in either Swiss mice (SW) or Wistar rats (Wi) fed on regular chow (CT) or a high-fat diet (HF) for 8 weeks (A). B depicts the body mass of the experimental animals employed in A at the time of tissue collection. In all experiments, n=5. In A and B, letters a, b and c represent P<0.05 vs respective lean control. 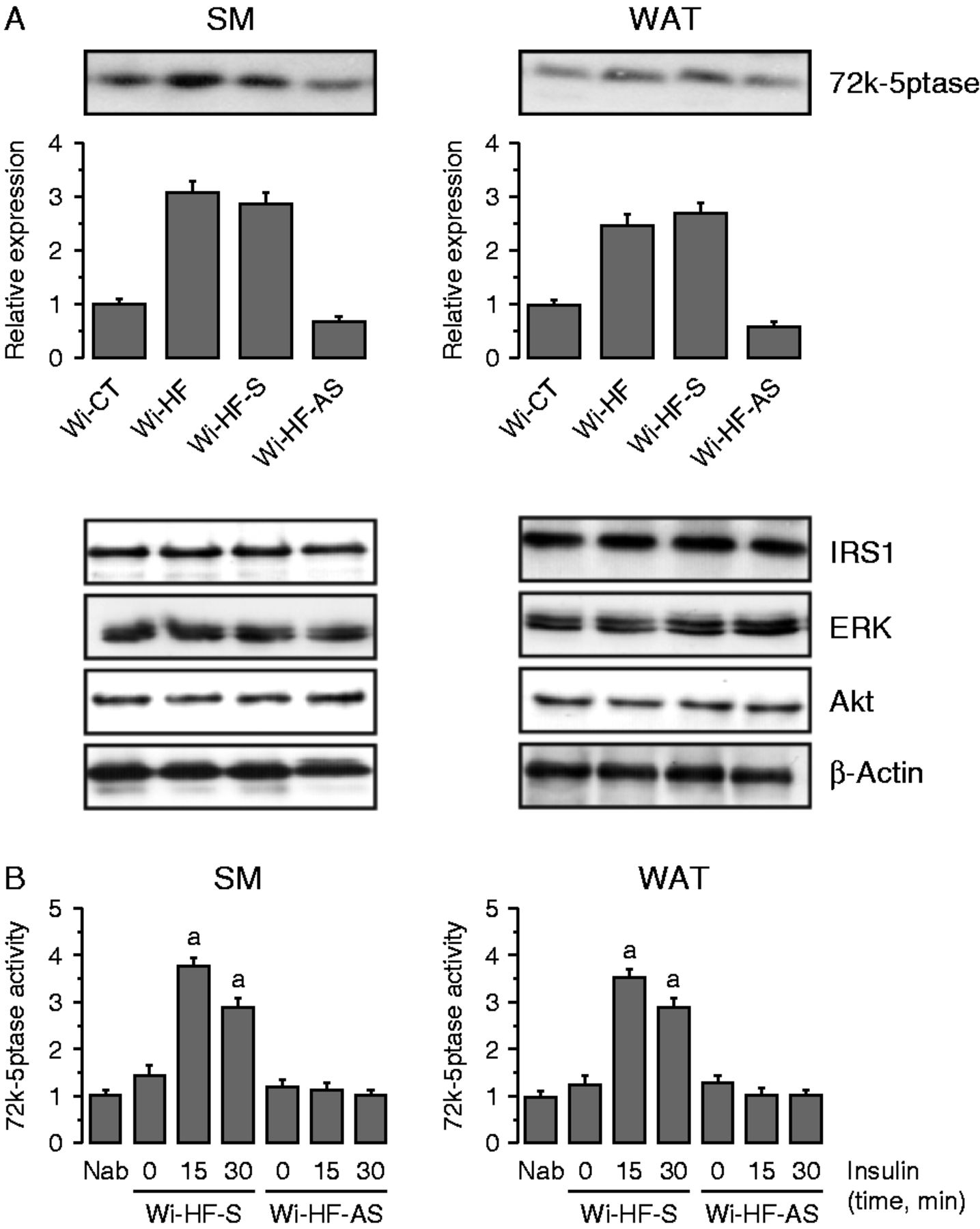 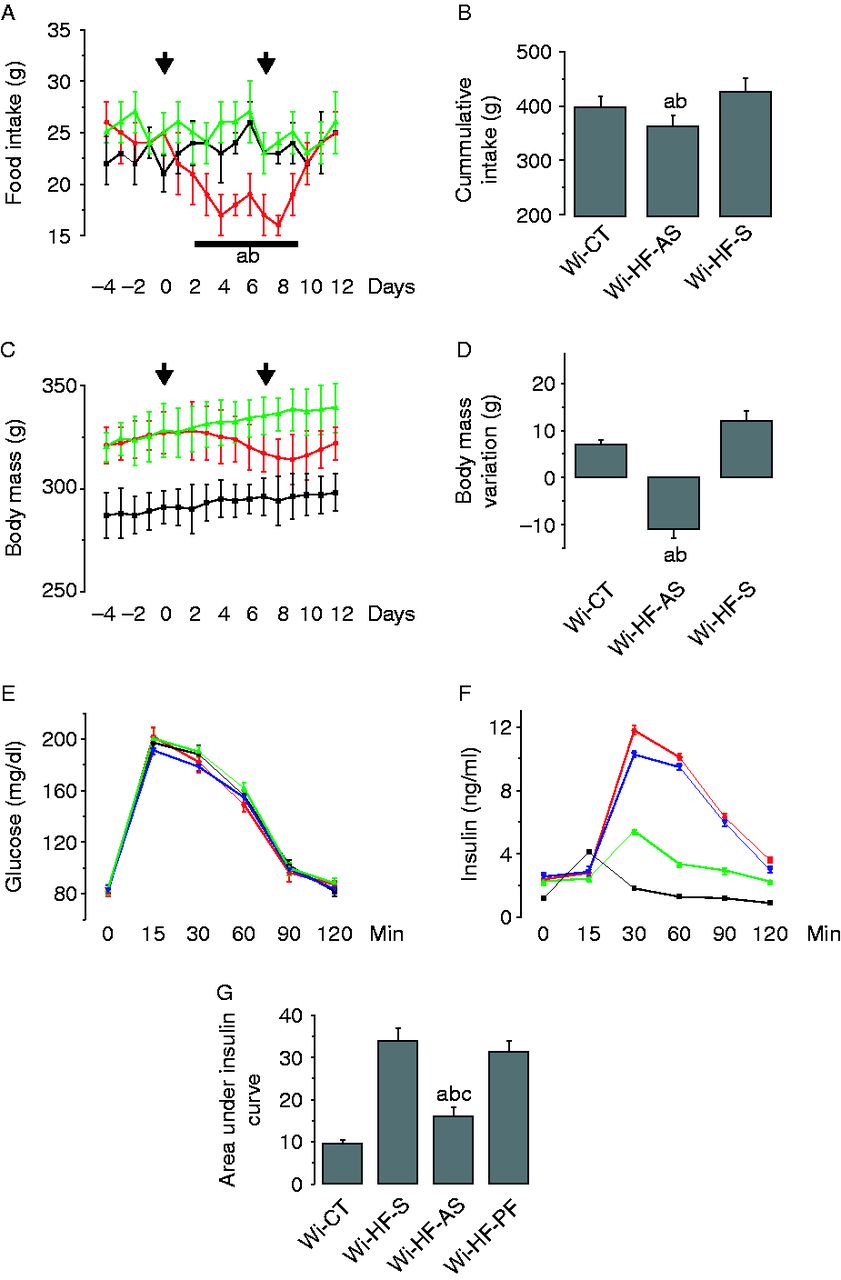 Food intake, body mass, and glucose homeostasis during 72k-5ptase inhibition. Male Wistar rats fed on regular chow (CT) or a high-fat diet (HF) for 8 weeks were treated once a day with an i.p. injection of saline (200 μl) (Wi-CT, black), sense (Wi-HF-S, green), or AS (Wi-HF-AS, red) anti-72k-5ptase oligonucleotide for 7 days (depicted by the arrows in A and C). Daily food intake (A) and cumulative food intake between the first and last days of treatment (B) were recorded, as well as the daily body mass (C) and body mass variation (D) during the same periods. Serum glucose (E) and insulin (F) levels were determined during an intraperitoneal glucose tolerance test performed on the sixth day of treatment. In E and F, a group of Wistar rats fed on HF diet and pair-fed (Wi-HF-PF, blue) with the Wi-HF-AS group was included. The areas under the insulin curves were calculated (G). In all experiments, n=5. In B, D, and G, a represents P<0.05 vs Wi-CT, b represents P<0.05 vs Wi-HF-S and c represents P<0.05 vs Wi-HF-PF. Full colour version of this figure available via http://dx.doi.org/10.1530/JOE-12-0562.

Inhibition of 72k-5ptase improves the action of insulin in obesity. Male Wistar rats, fed on regular chow (CT) or a high-fat diet (HF) for 8 weeks, were treated once a day with an i.p. injection of saline (200 ml) (Wi-CT), sense (Wi-HF-S), or antisense (Wi-HF-AS) anti-72k-5ptase oligonucleotide for 7 days. The glucose infusion rate (GIR) was determined during a hyperinsulinemic–euglycemic clamp (A). Insulin signal transduction was evaluated in the skeletal muscle (SM) (B) and white adipose tissue (WAT) (C) by the determination of basal (−) and insulin-induced (+) serine phosphorylation of Akt (pAkt), threonine phosphorylation of FOXO1 (pFOXO1), and tyrosine phosphorylation of ERK (pERK). Protein loading was evaluated by re-probing the membranes with anti-β-actin antibody. In all experiments, n=5. In all, a represents P<0.05 vs Wi-CT; b represents P<0.05 vs Wi-HF-AS. Full colour version of this figure available via http://dx.doi.org/10.1530/JOE-12-0562.