Keywords: Neuromedin B; NMB and its receptor; Osteoblasts; Proliferation; Estradiol

Keywords:
Neuromedin B; NMB and its receptor; Osteoblasts; Proliferation; Estradiol 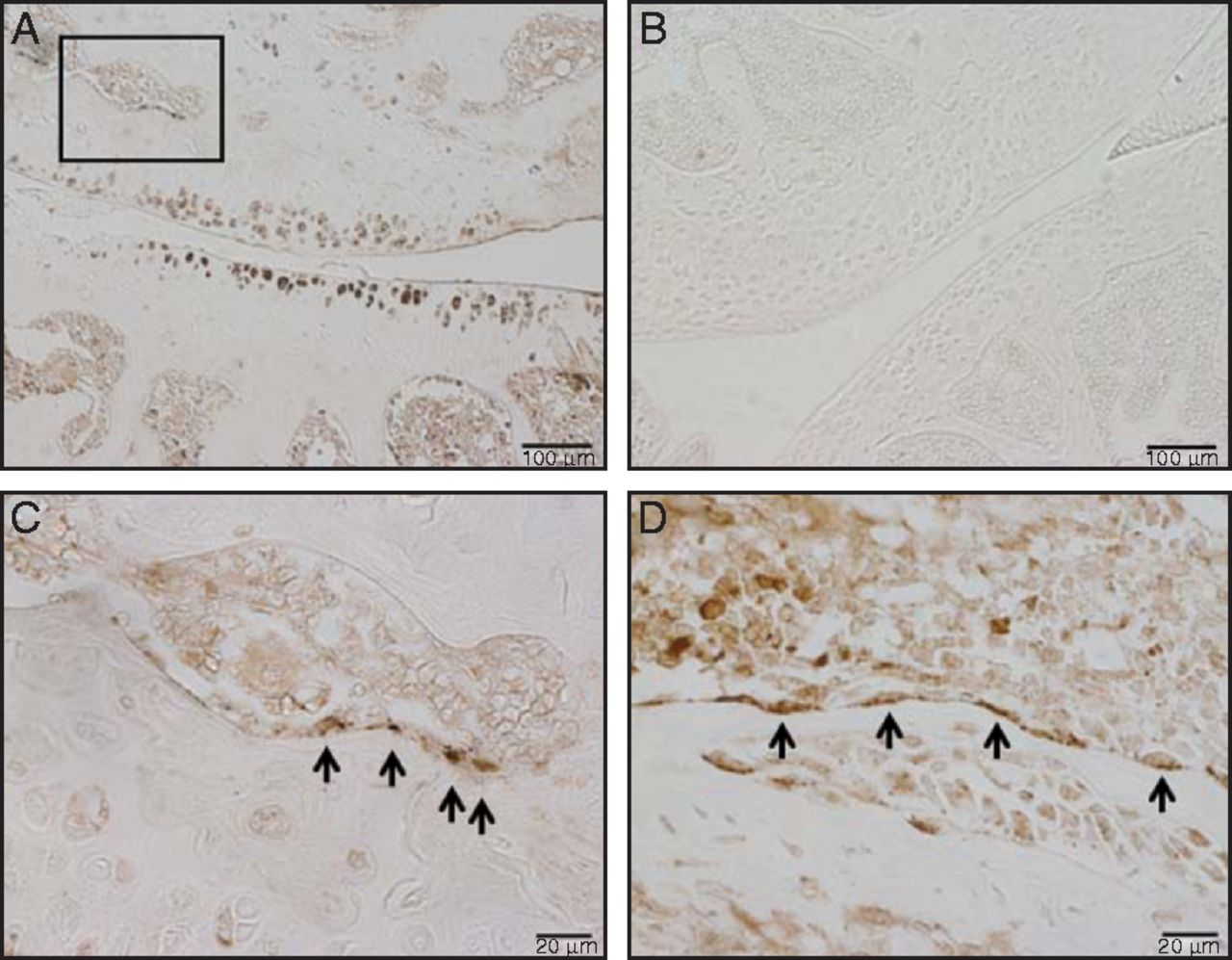 Immunostaining of NMB and NMBR in osteoblasts of mouse hind limb joints. (A, B and C) Immunostaining results for NMB in joints are shown at low (A) and high (C) magnifications. (A) Box indicates areas enlarged in (C). No signal was detected when joints were incubated without primary antibodies (B). Arrows denote examples of NMB-positive osteoblasts (C). Immunostaining results for NMBR in joints at high magnification. Arrows mark examples of NMBR-positive osteoblasts (D). Full colour version of this figure available via http://dx.doi.org/10.1530/JOE-12-0488. 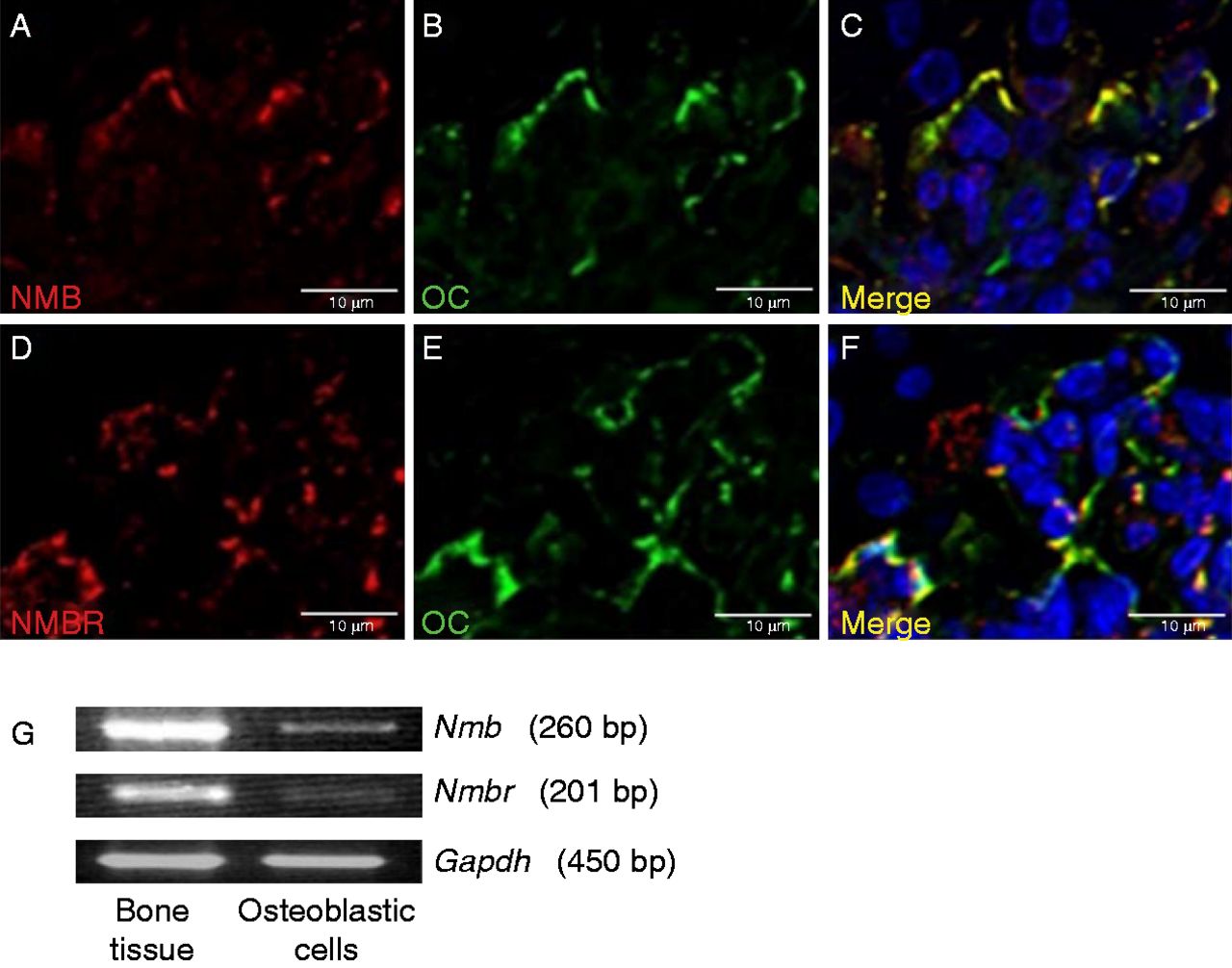 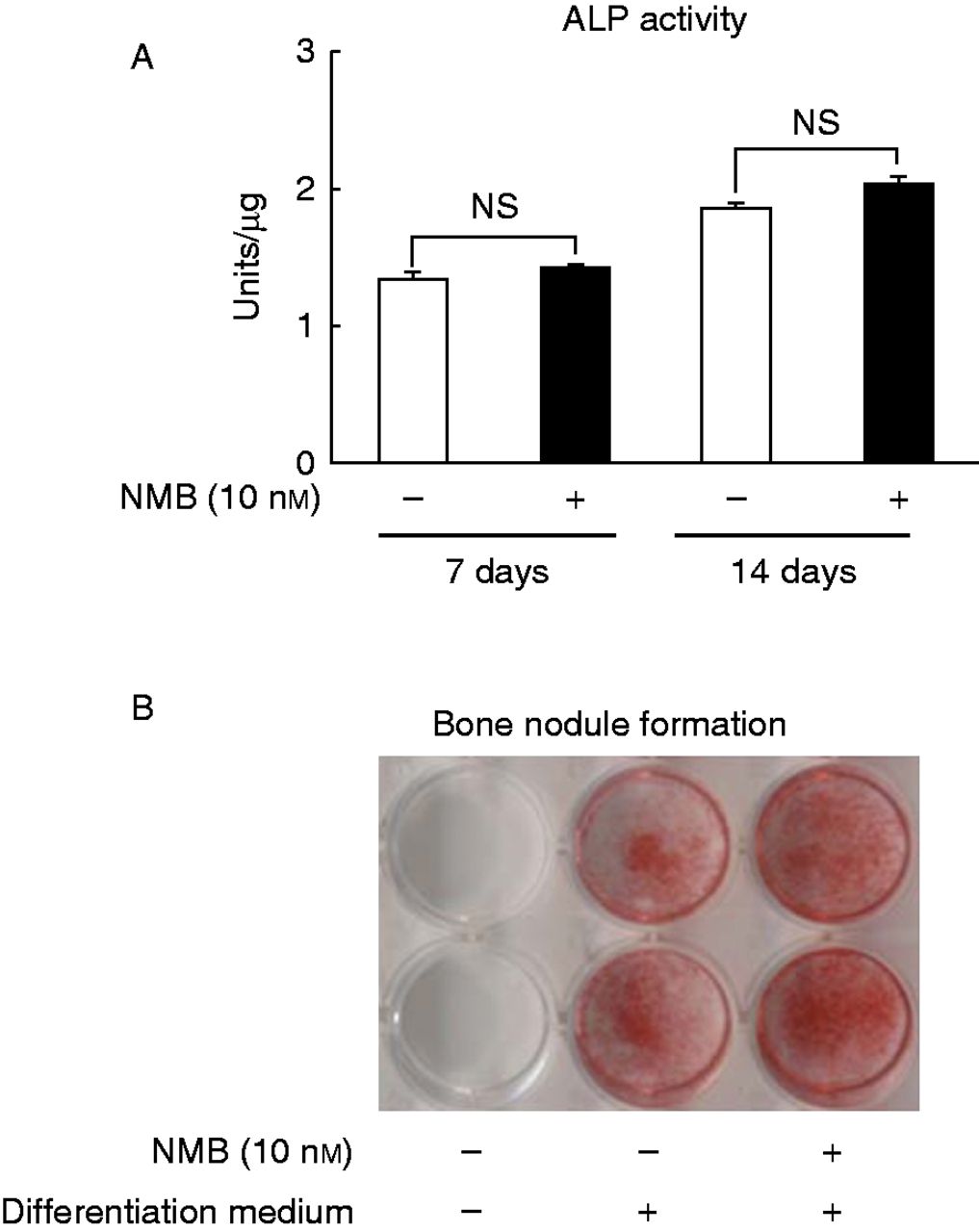 Roles of NMB in osteoblast differentiation. (A and B) Cells were cultured in differentiation medium (α-modified essential medium containing 0.1% BSA, 5 mM β-glycerophosphate, and 50 mg/ml ascorbic acid). (A) Cells were treated with 10 nM NMB for 7 and 14 days. ALP activity was assessed in ALP assay. (B) Cells were treated with 10 nM NMB for 21 days. Bone nodule formation was assessed by alizarin red staining. Data are presented as means±s.e.m. (n=4). NS, P value not significant. Full colour version of this figure available via http://dx.doi.org/10.1530/JOE-12-0488. 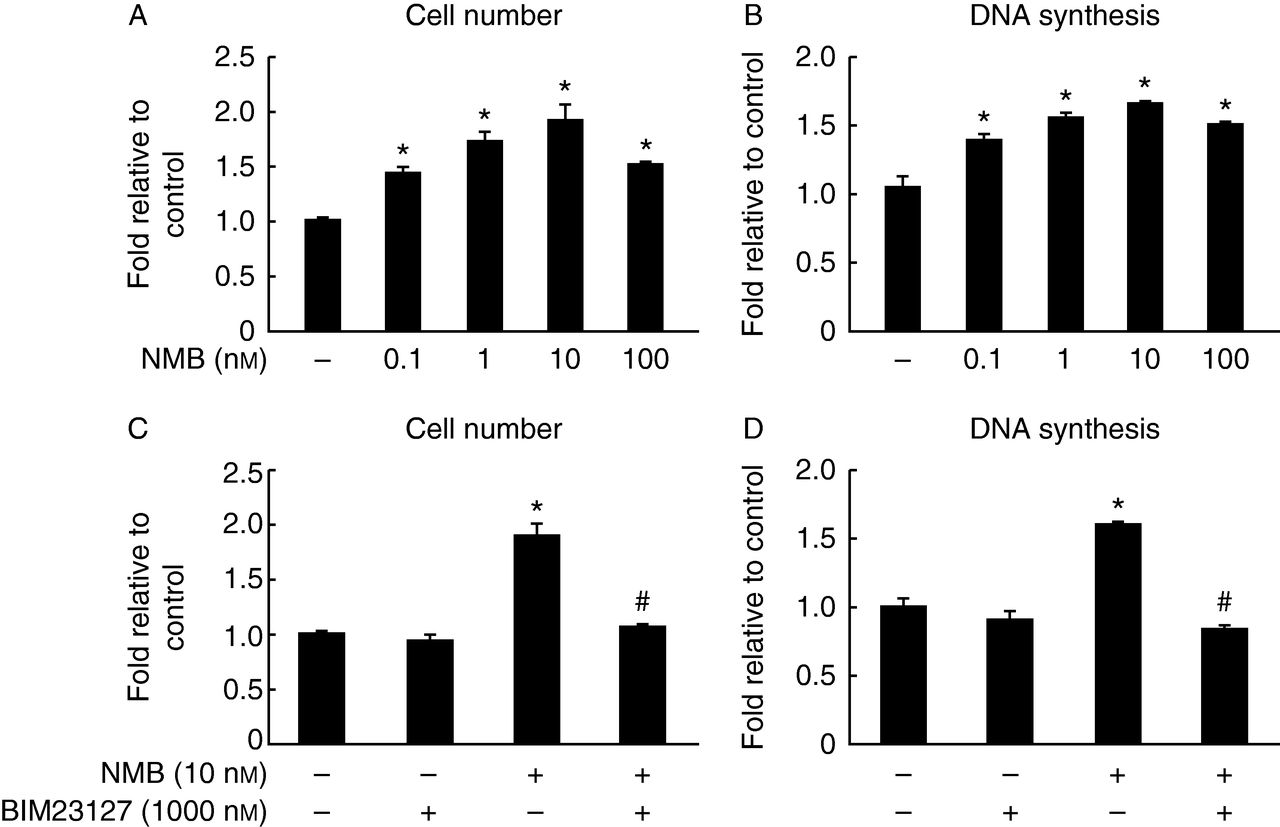 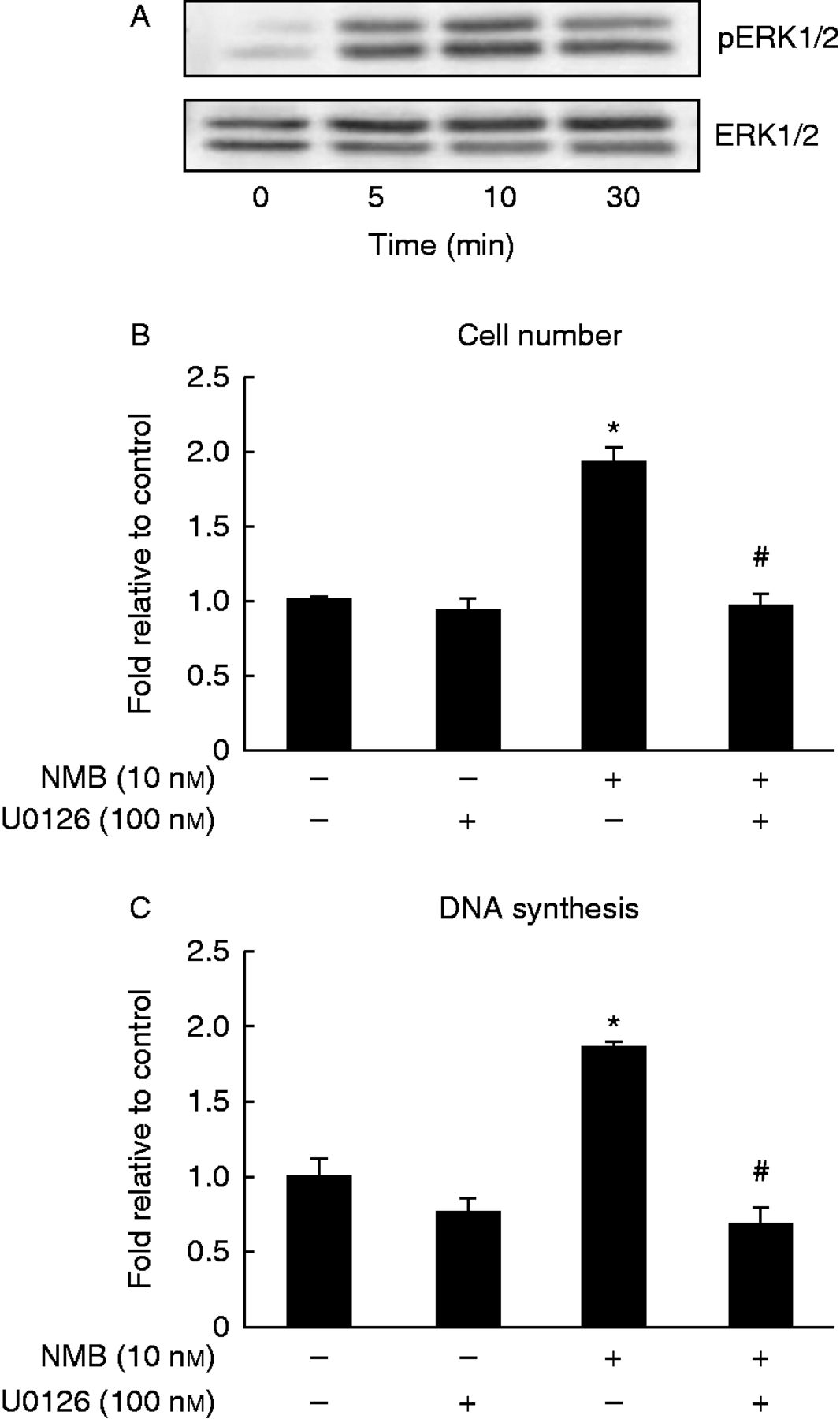 Role of ERK1/2 MAPK in NMB-induced osteoblast proliferation. (A) Cells were treated with 10 nM NMB for 0, 5, or 30 min. ERK1/2 activation was assessed on western blots. (B and C) Cells were treated with 10 nM NMB for 24 h with or without pretreatment with the MEK inhibitor U0126 (100 nM). Cell number (B) and DNA synthesis (C) was analyzed in proliferation and BrdU incorporation assays respectively. Data are presented as means±s.e.m. (n=4). *P<0.05 vs vehicle control group and #P<0.05 vs the group not treated with U0126. 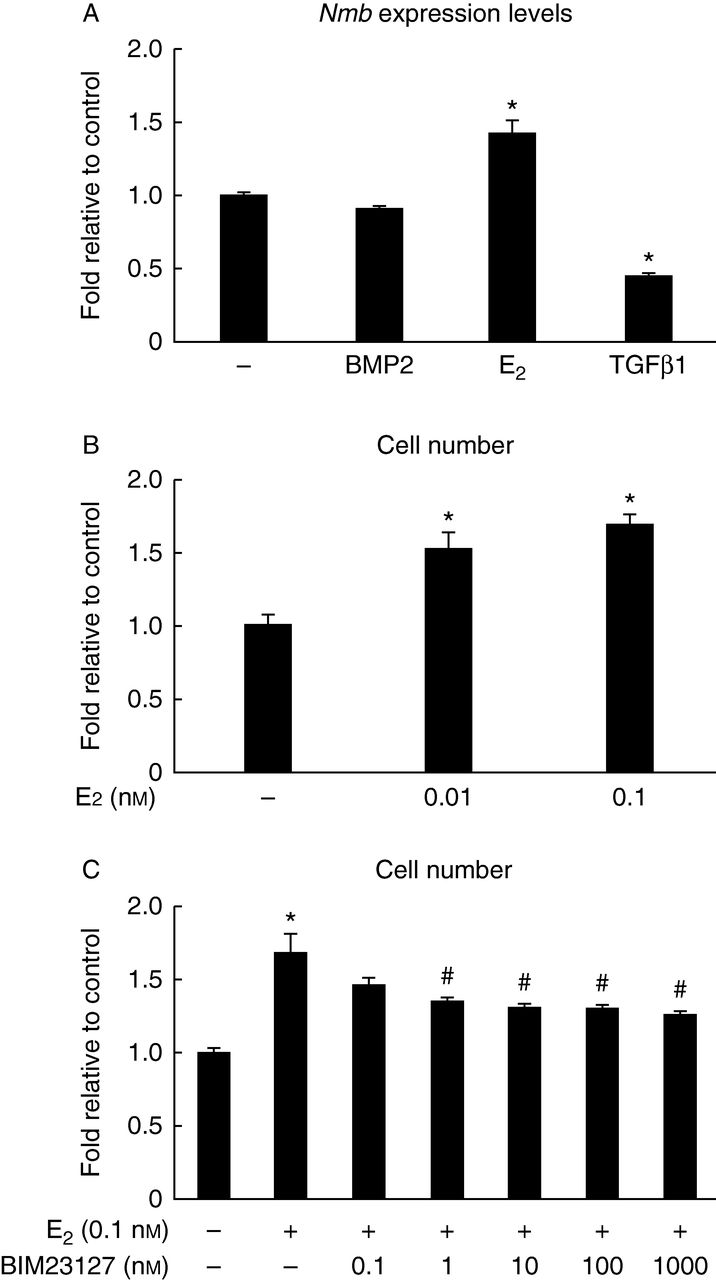